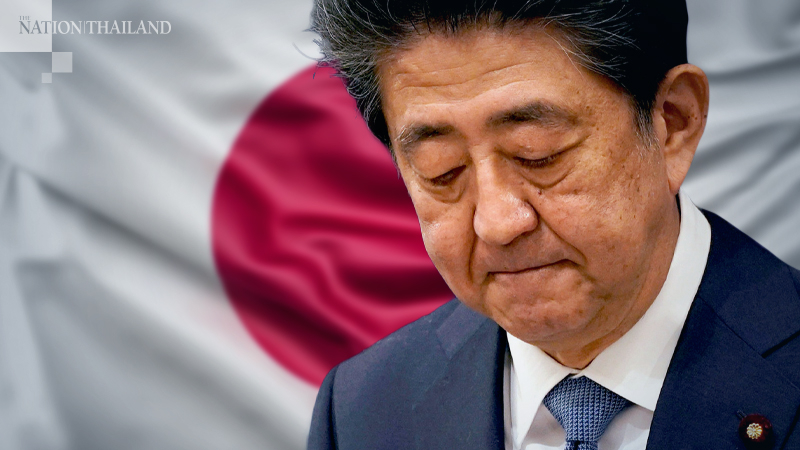 TOKYO - Japanese Prime Minister Shinzo Abe said Friday that he has decided to resign because of illness, after weeks of speculation about his health after two visits to a hospital and just days after setting a record as the country's longest-serving leader.

In a news conference in Tokyo, Abe told reporters that he has been "struggling" with his health, which began to deteriorate in mid-July, and that he was ready to end his leadership of the world's third-largest economy - as soon as his party chooses a successor.

"My poor health should not lead to wrong political decisions," he said. "As I'm no longer able to meet the expectation of the mandate of the people of Japan, I have decided that I should not stay in the position as prime minister anymore. So I have decided to step down."

Abe also stepped down as prime minister in 2007 after just a year in office due to chronic ulcerative colitis, before getting the condition under control with medication and returning to power with a landslide election victory in 2012. But he said the condition has worsened again and requires more treatment and monitoring.

Abe, 65, has overseen a period of relative stability in a nation previously known for frequent leadership changes, and he raised Japan's image on the world stage after a period when few people outside the country could even name its prime minister.

He has maintained a strong alliance with the United States - at a time when President Donald Trump took aim at many of America's allies - and has also championed free trade. But he leaves office with a widespread sense that he failed to achieve what he set out to do.

His tenure has been marked by efforts to revive Japan's economy through a policy package known as Abenomics, and he boasted of having created millions of jobs.

But experts said Abe has failed to push through the structural reforms that Japan desperately needs to restore dynamism to its sluggish economy.

"The real problem is he promised to overturn the status quo, but his party represents the vested interests of that status quo," said Jeff Kingston, director of Asian studies at Temple University Japan. "So it hasn't been a very easy task to institute reform."

Other policies have included a contentious expansion of Japan's military defenses. Abe tried unsuccessfully to modify Japan's pacifist postwar Constitution to explicitly recognize the role of the country's military self-defense forces, as part of a broader effort to counter the threats of a rising China and a nuclear-armed North Korea.

Abe asked for "forgiveness" that he was leaving office without achieving three goals closest to his heart: amending the Constitution, bringing back Japanese citizens abducted by North Korea and achieving a peace treaty with Russia to resolve a territorial dispute.

"It is really with a very heavy heart that I am resigning without being able to attain those things," he said, while holding out hope that whoever succeeds him could push them forward.

But Kingston said Abe was distracted by his "ideological agenda," putting too much time and effort into issues such as constitutional reform that few people cared about.

For Trump, it marks the departure of one of his closest friends on the world stage, a man with whom he shared a nationalist outlook and distrust of the media, and with whom he bonded over games of golf.

Japan's ties with China and South Korea, meanwhile, have sometimes been tense, complicated by territorial disputes, historical grievances over Japan's militaristic past and the Abe's administration's reluctance to acknowledge wartime abuses.

Experts say Abe also failed to grapple with some of the longer-term challenges facing his country, including its rapidly shrinking and aging population as well as climate change, leaving Japan still dependent on coal-fired power.

Nor did he follow through on a promise to make women "shine." He leaves office with his cabinet, the parliament and the top rungs of Japan's corporations still overwhelmingly male.

Abe had hoped to signal Japan's revitalization by hosting and presiding over the Olympics in Tokyo this summer, before the coronavirus pandemic forced officials to postpone the Games until 2021. The prime minister has faced widespread criticism for his handling of the health crisis, and his support slipped to near-record lows in recent months.

Abe hails from a wealthy and powerful political dynasty.

His great-uncle, Eisaku Sato, held the previous record as longest-serving prime minister, while his father, Shintaro Abe, was foreign minister in the 1980s and passed onto his son the dream of a territorial settlement with Russia over disputed islands.

But Abe was perhaps most strongly influenced by his grandfather Nobusuke Kishi, who served as a cabinet minister during World War II and prime minister from 1957 to 1960, and also sought to revise Japan's Constitution to take on a more assertive military and diplomatic role.

Stocks in Tokyo fell sharply Friday in response to the news of Abe's impending departure.

Abe's exit raises the question of who will succeed him; the ruling Liberal Democratic Party (LDP) now must draw up plans for a leadership election.

Among the candidates are Shigeru Ishiba, 63, a former defense minister who lost the leadership race to Abe in 2012 and has since been critical of his stewardship; Fumio Kishida, also 63, a former foreign minister who is seen as a relatively moderate member of the LDP; and Yoshihide Suga, 71, who serves as chief cabinet secretary and the government's main spokesman and is seen as a trusted aide of the prime minister.

But Ishiba's chances appeared to fade after LDP officials said the next leader will be selected by members of parliament rather than party members around the country. Ishiba is popular with the rank and file but not with party leaders and certainly not with Abe, who still commands the largest faction.

Kishida has little name recognition outside Tokyo, and Suga is seen as a skilled operative behind the scenes but hardly a charismatic figure under the spotlight. Foreign Minister Toshimitsu Motegi is an outside candidate, while Defense Minister Taro Kono is open about his ambitions for the top job but may have a reputation as too much of a maverick to gain widespread support.

Deputy Prime Minister Taro Aso, 79, is reportedly not interested in taking over after serving as prime minister from 2008 to 2009.

Yu Uchiyama, a political science professor at the University of Tokyo, said Abe's legacy was to have "established a stable administration" after a period of constant leadership changes, under much firmer control of the prime minister's office.