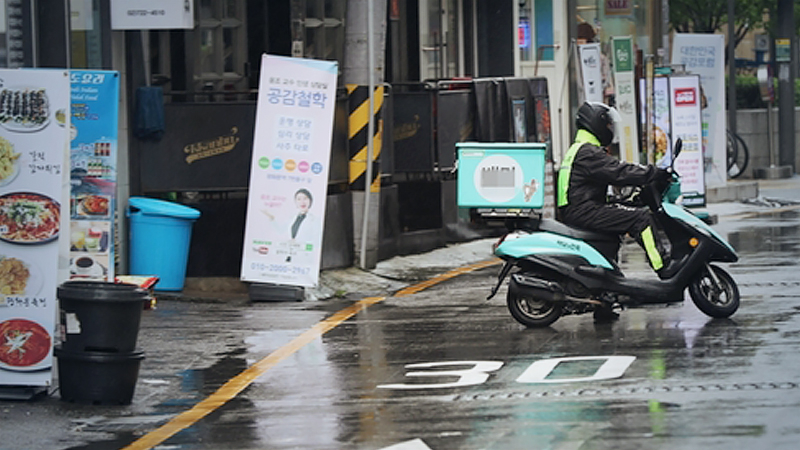 By Choi Jae-hee
The Korea Herald

Strengthened rules on social distancing imposed in an utmost effort to curb the resurgence of COVID-19 may drag down South Korea’s real economy, including private consumption, industrial output and employment, experts said Sunday.

As cluster infections are tied to enclosed areas such as coffeehouses, restaurants and indoor fitness centers, the government has decided to extend the current Level 2 social distancing for one more week until Sept. 6 in Seoul and the surrounding area, while adding stricter rules imposed for eight days that started Sunday to curb spiking virus cases, a move widely viewed as “Level 2.5” on the three-tier system.

As the spread of the novel coronavirus is showing no signs of easing, concerns have arisen that the tougher social distancing rules, if prolonged, could deal a harsh blow to consumer spending and sales of small business operators, industry sources said. The total sales of small enterprises in mid-August declined by 24.7 percent on-year, the biggest drop since February, according to Korea Credit Data.

Along with small business owners directly hit by the virus curbs, their suppliers of goods and services are also subject to the economic disruptions driven by social distancing, which will take a toll on the country’s self-employed sector in the long run.

As a result, production in the services sector is expected to further dip, extending the downtrend in recent months. The figured for March and April, when the country’s daily virus cases spiked, dropped 5 percent and 6.1 percent from a year earlier, respectively, according to Statistics Korea.

Amid sluggish consumer spending and industrial output, workers are likely to face higher risk of job losses, particularly in the service sector that requires face-to-face transactions. The country had already lost nearly 277,000 jobs in July compared to the previous year, mostly in the accommodation and food service segment, as well as the wholesale and retail industry, data showed.

If the ongoing second wave of COVID-19 infections requires Level 3 social distancing, the local economy will show a state of panic, experts say.

“In case the toughest Level 3 social distancing takes effect in metropolitan areas as well as nationwide for about two weeks, the South Korean economy is expected to contract by 0.4 percent and 0.8 percent on-year, respectively,” KB Securities said in its latest research report.

Under Level 3 social distancing, which is tantamount to a lockdown, gatherings of 10 or more people are banned, businesses must shut down and even public facilities, including schools and kindergartens would be closed. Private companies would be advised to order workers to work from home.

“The prolonged social distancing measures will push small business operators and private companies to the brink of bankruptcy, which prompts a rise in bad loans, causing insolvencies at local lenders.”

Under the “Level 2.5” rules, restaurants, cafes and bakeries in Seoul, Incheon and Gyeonggi Province can operate their business until 9 p.m. Only takeout and delivery are permitted from 9 p.m. to 5 a.m. Franchise coffee chains, however, should serve customers only via takeout and delivery services regardless of operating hours.

The government also banned the operation of indoor sports facilities such as fitness centers and driving ranges as well as private academic institutions, including large academies, in infection-prone areas.