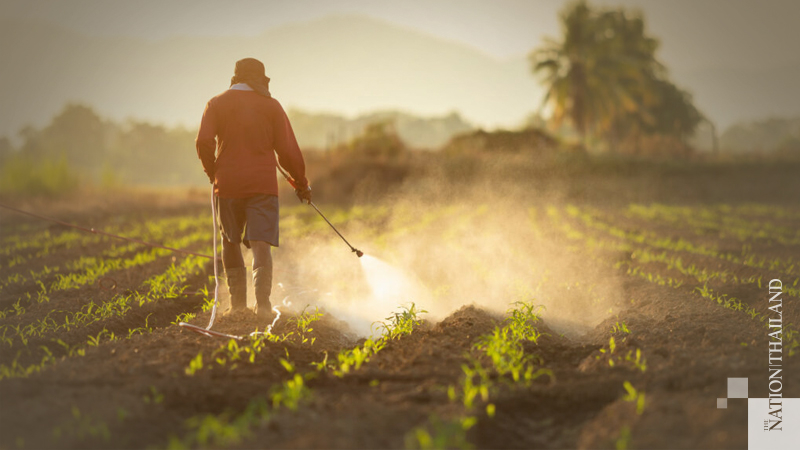 The Public Health Ministry is pushing for a complete ban on three hazardous pesticides, after reports showed that toxic residue was found in newborns and more than 40,000 people have been sickened in the past five years.

The highest number of such cases was in the Northeast.

Public Health Minister Anutin Charvirakul and Agriculture and Cooperatives Minister Chalermchai Sri-on held a joint press conference to discuss the subject of completely prohibiting the use of paraquat, chlorpyrifos and glyphosate. The agriculture minister said he will have the Hazardous Substances Committee look into the complete ban.

The number of pesticide poisoning cases dropped in 2018-2019 thanks to a campaign against the use of these chemicals and subsequent reduction in imports.

One survey found that 2.65 million households used chemicals, while 677,522 used agricultural chemicals. The other found that household members suffered from symptoms or illnesses related to pesticide poisoning. Of the respondents, 12,554 suffered from shaky hands or walking problems, 79,645 suffered from numbness in hands or feet, 22,569 had developed dermatitis, 641 suffered necrotising fasciitis, 370 developed leukaemia, 922 were lymphoma patients, 1,132 developed mental problems while 2,349 required haemodialysis.

Dr Opas Karnkawinpong, director-general of the Department of Medical Sciences, said laboratory tests in eight provinces in 2019 found paraquat residue in 23 per cent of the fruit and vegetable samples.

In February this year, a House committee collected samples from 41 provinces and found chlorpyrifos and glyphosate residue in most of them.

“Pesticide poisoning was discussed at the latest symposium on chemical residues and its effects on the mother and child. Studies in areas where agricultural chemicals are heavily used found residues of organophosphate, a chemical used in insecticide, in pregnant mothers’ urine, while newborns’ first faeces was found to contain paraquat residue.

“These newborns were closely monitored and it was found that their development was slower than normal. This should be considered as a reminder that chemicals should be stopped from entering the food chain and poisoning humans,” Dr Opas said.