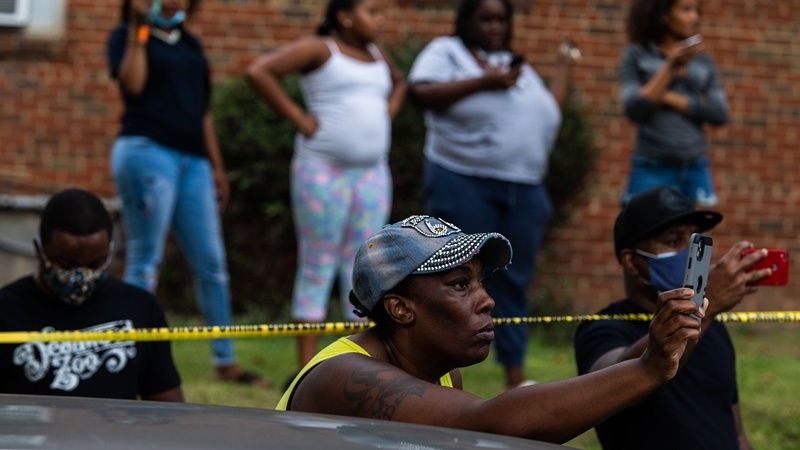 Locals record a news conference on Wednesday, Sept. 3, 2020, regarding a fatal police shooting in Washington two days prior. MUST CREDIT: Washington Post photo by Demetrius Freeman

WASHINGTON - A District of Columbia police officer who fatally shot a young man Wednesday afternoon in Washington fired once after seeing the 18-year-old turn while holding a gun with his right hand, according to body-camera video made public Thursday. 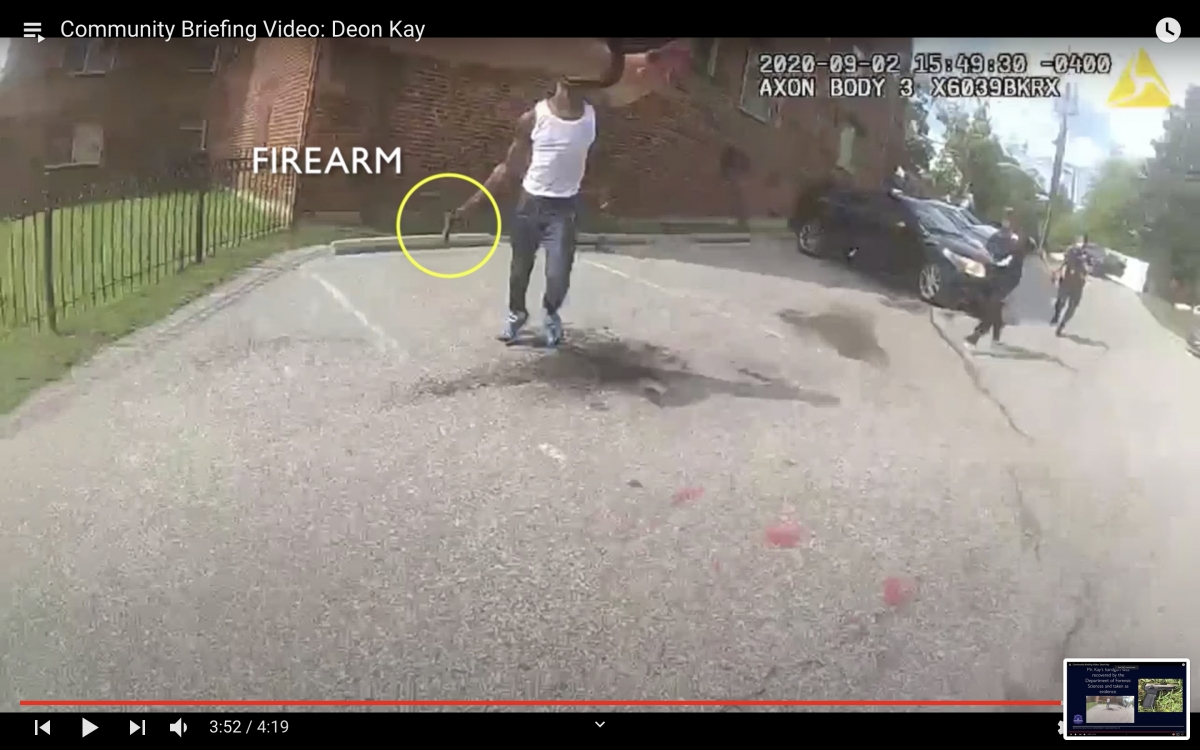 Deon Kay, who lived with his mother a half-mile from where he was shot in Congress Heights, was struck in the chest and the bullet exited his back, authorities said. He died at a hospital.

District Police Chief Peter Newsham said officers in the 7th District saw a live-streamed social media video of Kay and others inside a vehicle, holding weapons. Newsham said the officers recognized Kay and another man from previous interactions.

They tracked the vehicle, a Dodge Caliber, just before 4 p.m. to a parking lot in the River Hill apartment complex, police said.

One of the occupants exited the vehicle and was chased by police before escaping. Police said the officers then saw Kay, who then got out of the vehicle. He is seen on the video holding a gun and turning to face the officer who was running toward him.

"Don't move! Don't move!" the officer, identified as Alexander Alvarez, is heard shouting on the video. Alvarez fired one shot.

Newsham said Kay threw the weapon as or just after he was struck. It was found nearly 100 feet away in a grassy lot at the apartment complex.

District officials said Alvarez, who is in his mid-20s and joined the department in 2018, was assigned to the crime suppression team in the 7th District.

Officials said a complaint was previously filed against him with an independent review board and was dismissed. Officials did not elaborate. He has been placed on routine leave pending the outcome of the investigation.

Efforts to reach Alvarez on Thursday were unsuccessful. A representative of the police union did not respond to an inquiry.

District officials moved quickly to try to tamp down demonstrations like those that been a fixture in the city and across the country since George Floyd was killed in the custody of Minneapolis police in May. As has been true elsewhere, some of the demonstrations in the District have turned violent.

Demonstrators converged at the 7th District police station Wednesday night and outside the home of Mayor Muriel Bowser, a Democrat, on Thursday morning.

At a news conference, Newsham said there "is a lot of misinformation" about the shooting.

Bowser said people should "not let any anger spill over into violence in our city."

"The officer was trying to take guns off the street," Bowser said. "He encountered somebody with a gun."

Kay's family and others have questioned the police account of the shooting. Demonstrators demanded Thursday that Bowser fire Newsham. A police spokesman said family members watched the video of the shooting before it was made public. Bowser said the city has offered relatives counseling.

Attempts to reach Kay's relatives by phone, at their home and through one of his mentors who knows the family were unsuccessful Thursday.

Newsham, at the news conference, said Kay was a "validated gang member" who had "multiple touches with the criminal justice system." The chief's assertions could not be verified, and he said he could not elaborate on specific cases. He said when officers saw the live-streamed video, they knew Kay by name.

"This is a tragedy to have any young person killed in the District of Columbia," Newsham said. "I'm pretty sure Deon Kay fell through multiple safety nets before yesterday afternoon."

Police arrested two other people allegedly from the vehicle and said they found an additional firearm on one of the men charged. Police described that weapon as a "ghost gun," made from kits and lacking serial numbers.

Marcyelle Smith, 19, of Southeast Washington was charged with carrying a pistol without a license. A District Superior Court judge on Thursday ordered him released and set a court day for January.

The judge said Smith had no prior convictions. Through his attorney, Smith described himself as rapper who has been in several music videos that are on the Internet and that showcase firearms.

The other man arrested was charged with not carrying a driver's license.