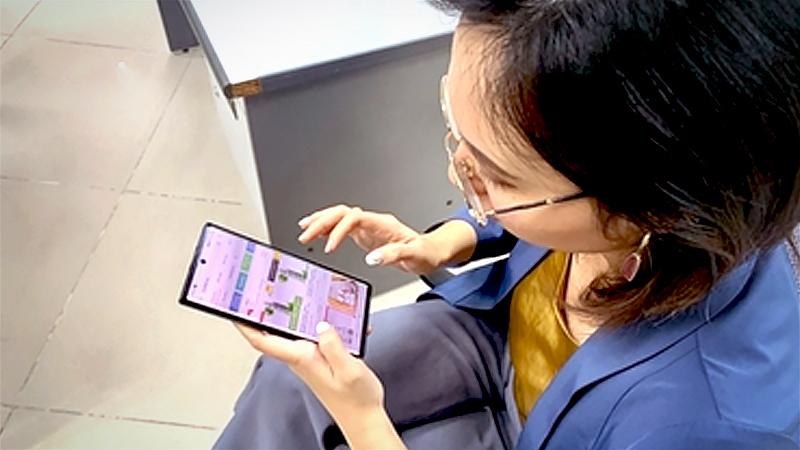 A woman browses an e-commerce website on her phone for hair products. — VNA Photo

Online shopping and electronic payments in Viet Nam have become more common in recent years as more of the country's population gains access to the internet, and e-commerce in the 95 million-strong market is set to enter a rapid growth phase in the near future, according to industry experts.

Dao Duong Thanh, development director at Moca, a popular mobile payment firm in Viet Nam and partner of ride-hailing firm Grab, said more than 61 million people in the country access the internet through the mobile devices and spend as much as three 3 hours and 12 minutes online daily.

Thanh said since his firm's partnership with Grab in 2018, Moca has built a cashless regime for Grab's ecosystem, which covers not just rides, food and package deliveries but also other services such as electronic payments for utility bills and mobile phone top-ups.

By mid-2020, 43 per cent of all transactions on Grab were classless, claimed Thanh as his firm observed a steady growth of users, indicating a shift in consumers' habit in favour of online, cashless payments.

Hoang Quoc Quyen, a PR executive from Tiki, a major e-commerce platform in Viet Nam, said the development of 4G infrastructure, fibre optic internet technology and more than 100 million registered mobile phone subscriptions in the country have laid the foundation for the rapid development of e-commerce and electronic payment.

A relatively young population quick to adapt to and adopt new technologies, coupled with one of the fastest-growing economies in the world, made Viet Nam a fertile ground for the digital economy, including e-commerce. Online shopping not only offers a faster and more convenient shopping experience but also reduces risks on the buyers' side compared to traditional cash-based transactions.

Despite these numerous advantages, however, e-commerce firms, especially domestic players, have been unable to realise the full potential of the market to achieve faster growth, said Quyen.

He said the major shortcomings of Viet Nam's e-commerce included a lack of sound policies to support the development of e-commerce firms, a mismatch between e-commerce platforms and electronic payment systems and inadequate trust on the consumer's side.

Quyen said among 4.5-5 million orders handled by Tiki on a monthly basis, online payments account for just more than 40 per cent with the rest still employ cash-based transactions. This was a significant gap compared to ASEAN countries such as Indonesia and Malaysia, which average 85 per cent.

Cao Xuan Quang from the competition and consumer protection department under the Ministry of Industry and Trade said there is an urgent need for stronger policies to protect consumers as well as e-commerce firms.

Quang said violations in e-commerce activities are often complex and typical complaints included the sales of goods that did not match their online descriptions and the illegal collection and handling of consumer personal information.

He urged government agencies to quickly review and amend the country's Laws on Consumer Protection and to create a level playing field for e-commerce and mobile payment firms. — VNS