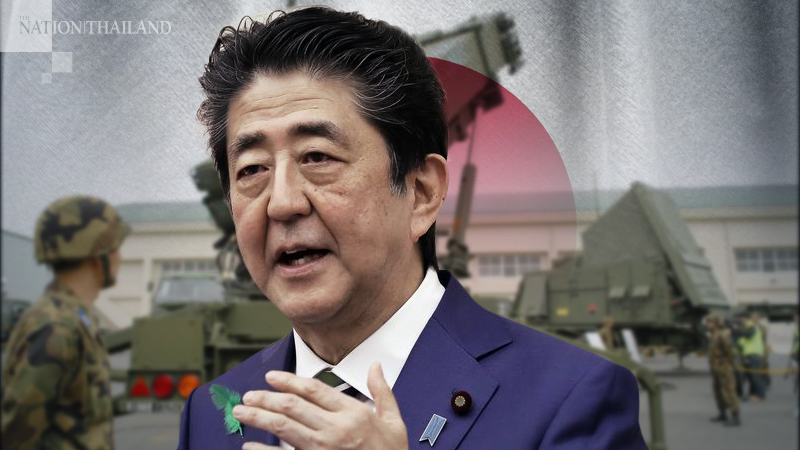 Prime Minister Shinzo Abe has stopped short of specifying a new course for the nation’s missile defense policy, leaving discussions to the next cabinet.

Abe released a statement on Friday with regard to missile defense that could involve the ability to attack enemy bases, a matter that he has shown his willingness to realize. In the statement, Abe said the government would identify “policies to be undertaken” by the end of this year through discussions with the ruling parties. However, he did not specify a policy direction toward having such capability.

“As I am stepping down [as prime minister], I reviewed the past discussions and released [their essence] in the form of a statement,” Abe told reporters after a National Security Council (NSC) meeting of four relevant ministers on Friday. “I hope that the matter will also be discussed thoroughly by the next cabinet.”

He added that the statement has no binding effect on the next cabinet.

In the statement, Abe called for considering alternatives to the Aegis Ashore land-based interception system that the government decided not to deploy. He also stressed the need to set a new course for security policy on missile defense, saying, “There is a question of whether it is possible to protect and defend the lives and the peaceful livelihoods of the Japanese people only by enhancing our interception capability.”

In the statement, Abe did not use the phrases, “within the enemy’s territory,” which was mentioned in a set of proposals compiled by the Liberal Democratic Party, nor “attack enemy bases.”

“Discussions are expected to continue on these issues,” an NSC source told reporters on Friday.

When the government decided in June to scrap its plan to deploy the Aegis Ashore system, Abe expressed his willingness to possess the capability to strike enemy bases, saying, “We’ll set a new course and implement it swiftly.”

Behind this is a sense of crisis in the government that measures aimed only at strengthening Japan’s missile defense system, which is supposed to serve as a shield, appear to have reached their limit as North Korea and China have advanced the development of new types of missiles and improved their launch technologies in recent years. Abe pointed out also in his Friday statement that North Korea possesses the capability to launch a nuclear attack and has developed new types of missiles to breach missile defense networks.

However, discussions on the matter were effectively suspended as the prime minister announced his resignation for health reasons.

The statement was not released in the usual manner, which would require cabinet approval. Unlike statements such as one released in August 2015 for the 70th anniversary of the end of World War II, Friday’s statement was intended to deliver Abe’s individual thoughts instead of describing a government stance, according to a senior Foreign Ministry official. In this way, Abe appears to have tried to leave room for discretion to the next prime minister.

Chief Cabinet Secretary Yoshihide Suga, who has widened support in the upcoming LDP presidential election, is said to have no strong position regarding security policy, so many people speculate that his priority on the issue of possessing the ability to attack hostile bases is not as high as Abe’s.

At a press conference on Friday, Suga mentioned the matter only briefly, saying, “There is no change in the stance that discussions are held thoroughly within the government while taking the opinions of the ruling parties into consideration.”

Komeito, the LDP’s ruling coalition partner, has shown strong caution. “Alternative measures for the Aegis Ashore system must be decided by the end of the year, but there is no need to rush to discuss enemy base attack capabilities,” a senior Komeito official said.