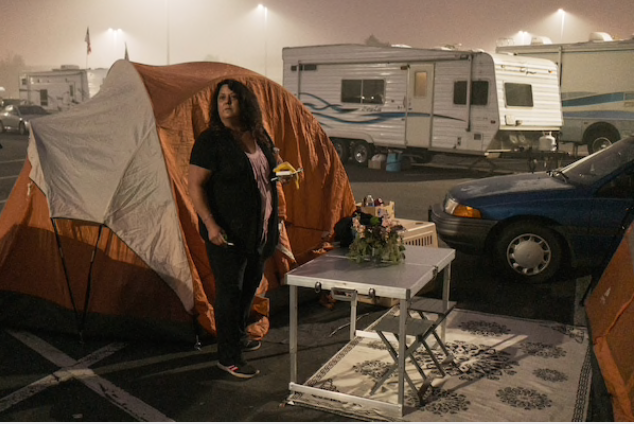 Deborah Stratton on Sunday in Happy Valley, at the evacuation area in the Clackamas Town Center parking lot. MUST CREDIT: Photo by Mason Trinca for The Washington Post.

WASHINGTON - Democratic presidential nominee Joe Biden excoriated President Donald Trump on Monday over his environmental record as wildfires continued to burn through much of the West and as the president used a trip to California to question the scientific consensus that climate change is a leading cause of the devastating blazes.

Biden said during a speech in Wilmington, Del., that the "undeniable, accelerating, punishing reality" of global warming was playing out in the wildfires and hurricanes that have marked the end of summer, arguing that it is a problem that "requires action, not denial."

In California, Trump sought to pin the blame for the fires on another culprit - forest management - while shrugging off warnings that human-caused climate change will continue to make Western states a tinderbox with fires that destroy communities every year.

"It will start getting cooler. Just you watch," he said during a briefing with state and local leaders in McClellan Park, Calif.

The dueling appearances injected the issue of climate change squarely into presidential campaigns that have been dominated by the coronavirus pandemic, a faltering economy, racial justice protests and questions about which candidate has the character to lead. But the warming of the planet and its impact on daily life is difficult to ignore with millions of acres burning in California, Oregon and Washington state, leading to dozens of deaths, tens of thousands of people displaced and skies filled with a smoky, dangerous haze that blocks out the sun.

Biden called Trump a "climate arsonist" who had belittled the factors worsening the wildfires and likened the president's stewardship of natural disasters to his handling of the pandemic and racial tensions across the country that flared this summer following police shootings of Black people.

"Donald Trump's climate denial may not have caused these fires and record floods and record hurricanes," Biden said Monday. "But if he gets a second term, these hellish events will continue to become more common, more devastating and more deadly."

While criticizing the president for his lack of vision, Biden stuck to promoting climate change policies with wide support and avoided addressing politically thorny topics such as the "Green New Deal" many liberal activists have demanded.

Not long after Biden's remarks in Delaware, California leaders focused on climate change during their briefing with Trump. Gov. Gavin Newsom, a Democrat, made it clear that he was not seeking a confrontation with the president on the topic but that "we come from a perspective humbly where we submit the science and an observed evidence itself is self-evident that climate change is real and that is exacerbating this."

Wade Crowfoot, secretary of the California Natural Resources Agency, pushed the issue more aggressively after the president dismissed concerns that temperatures were on the rise, telling Trump: "I wish science agreed with you."

Trump's assertion ran contrary to the scientific consensus that human-caused climate change has made the West hotter and dryer, enabling more fires to behave in extreme, unpredictable ways.

Warming temperatures dried out vegetation during a record-shattering heat wave - the second since mid-August. Recent blazes exploded in size during an outbreak of strong winds that simultaneously hit the Cascades, Sierras and coastal mountain ranges. Gusts pushed flames down canyons, through campgrounds, past highways and into neighborhoods.

Studies have documented an increase in acres burned in large fires across the West because of global warming, and projections show that the region is trending toward hotter and drier conditions that leave the region more susceptible to large blazes.

But the dismissal was consistent with his past remarks calling climate change a "hoax."

The president has continued to solely blame mismanaged forests in the Western states for the intensifying wildfires. He claimed Monday that he had spoken to a foreign leader - whom he did not name - who insisted that his or her country has "trees that are more explosive [than] they have in California, and we don't have any problem because we manage our forests."

The management - or mismanagement - of forests across California and elsewhere has resulted in a massive amount of fuel on the ground that has only intensified and deepened the reach of the wildfires. And ever-encroaching developments, as more and more neighborhoods are built on fire-prone land, certainly have played a role in the current devastation.

But fire ecologists say no amount of "clearing" in the forests could have prevented this year's disasters. In many cases, research shows, management practices such as salvage logging actually exacerbate fire susceptibility.

Timothy Ingalsbee, a retired wildland firefighter and certified fire ecologist, noted the Holiday Farm Fire, a blaze near his home in Eugene, Ore., that has burned through thousands of acres of an industrial tree plantation. "This area has experienced the maximum timber management possible," he said. "And has made these lands even more flammable than the native forests."

Newsom told the president that state officials "have not done justice on our forest management." Newsom also noted to Trump that 57% of the land in California is owned by the federal government, which bears a major responsibility in keeping the forests cleared.

The wildfires in the West are what climate scientists call a compound disaster, in which more than one extreme event takes place at the same time across a varied geography. While researchers have warned that compound disasters are an inevitable result of climate change, few would have predicted the spate of simultaneously burning, rapidly expanding fires spanning the entire U.S. West Coast to happen so soon.

"Everything we didn't do in the past is now coming due in the present," said Char Miller, professor of environmental analysis and history at Pomona College, east of Los Angeles.

Trump, who rarely hesitates to weigh in on a topic of the day, had stayed mum about the wildfires until a tweet Friday. Asked in Sacramento why it took him three weeks to visit California, Trump dismissed it as a "nasty question" and said he promptly issued a disaster declaration for the state.

On Monday, Biden vowed to meet the threat of climate change aggressively as president, through setting new fuel efficiency standards, spurring more electric vehicle use, and creating a climate corps to make the country less vulnerable to wildfires and floods.

This summer, Biden rolled out a $2 trillion plan that treats climate change as one of the central threats facing the nation. It would include eliminating carbon pollution from the electric sector by 2035, rejoining the Paris climate accord, making huge investments in renewable energy and creating incentives for more energy-efficient cars, homes and commercial buildings.

The Trump administration has rolled back scores of key environmental regulations, including weakening federal fuel efficiency standards for the nation's automobiles and easing curbs on emissions from the nation's power plants. The administration has changed a bedrock law meant to give ordinary people a say in projects that threaten to pollute their neighborhoods. It has sought to expand offshore drilling, as well as oil and gas exploration, in previously off-limits places such as the Arctic National Wildlife Refuge.

His administration also recently chose an academic who has long questioned the scientific consensus on global warming to help run the National Oceanic and Atmospheric Administration (NOAA), the agency that produces much of the climate research funded by the U.S. government.

The president, who has referred to himself as a "great environmentalist," has rejected growing calls to act on the economic and security threats posed by a changing climate. He has promoted the fossil fuel industry, criticized renewable technologies such as wind power, and vowed to withdraw the United States from an international effort to cut greenhouse gases that fuel global warming.

Lawmakers from the states hit hardest by the fires have pressed the administration for swift emergency disaster declarations to free up federal funds that have been approved by the White House, though aides said Congress probably will make more specific requests once the scope of the damage becomes more clear.

There is no immediate need for funding action from Congress, according to aides, because federal disaster relief fund has sufficient funding and will be automatically replenished in a stopgap government funding resolution that has to pass before the end of this month if the government is to avoid a shutdown.

"In the past, this White House has been certainly willing to use emergency funds to carry out their agenda," said Sen. Ron Wyden, D-Ore. "I hope that won't be the case now."