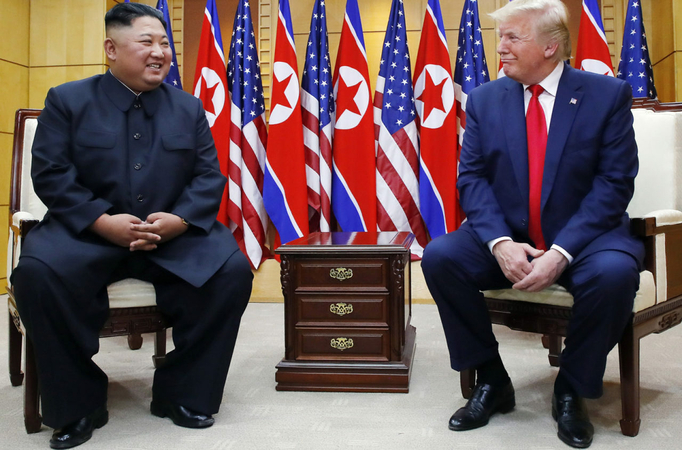 WASHINGTON -- US President Donald Trump and North Korean leader Kim Jong-un both claim to have formed a special and close friendship, but only time will tell if their friendship is genuine, famed Washington Post journalist Bob Woodward writes in his soon-to-be released book, "Rage."

"Trump has personally said they are 'love letters,' Woodward writes in his upcoming book, referring to 27 letters exchanged between Trump and Kim that he has obtained.

"They are more than that -- they reveal a decision by both to become friends. Whether genuine or not, probably only history will tell," he says, according to excerpts of his new book obtained by Yonhap News Agency.

Woodward notes the North Korean leader, more frequently than Trump, used what he calls "verbose flattery" while he says both Trump and Kim used language that might be "uttered by the Knights of the Round Table or perhaps suitors."

"Thank you again for making this long journey to Hanoi," Trump wrote in a letter to Kim, dated March 22, 2019.

"As I said to you when we parted ways, you are my friend and always will be," Trump added, according to the book.

Kim responded with yet more flattery.

"I also believe that the deep and special friendship between us will work as a magical force…," Kim wrote to Trump on June 10.

"Your Excellency Mr. President, I still respect and lay my hopes on the will and determination that you showed in our first meeting to resolve the issue of our unique style that nobody had ever tried, and to write a new history

At times, Trump appears to be using his "special friendship" with Kim to encourage the latter to give up his nuclear ambitions.

"I completely agree with you. You and I have a unique style and a special friendship. Only you and I, working together, can resolve the issues between our two countries and end nearly 70 years of hostility, bringing an era of prosperity to the Korean peninsula that will exceed all our greatest expectations -- and will be the one to lead," Trump wrote in a letter dated June 12, 2019.

When asked what if he may given Kim too much power by meeting him, Trump argued all he did was just one thing -- meet Kim.

Woodward, however, notes such a friendship and recognition from a global leader such as Trump may have been what North Korea's Kim may have wanted in the first place.

"But many from the foreign policy establishment criticized Trump for agreeing to meet without locking down some commitments from the North Korean leader. The piling on was intense. In this view Trump had instantly given the North Korean leadership the international standing and legitimacy it had long sought," he says in his book.

Their talks have stalled since their last meeting in June 2019 that followed their second bilateral summit four months earlier that ended without a deal. (Yonhap)