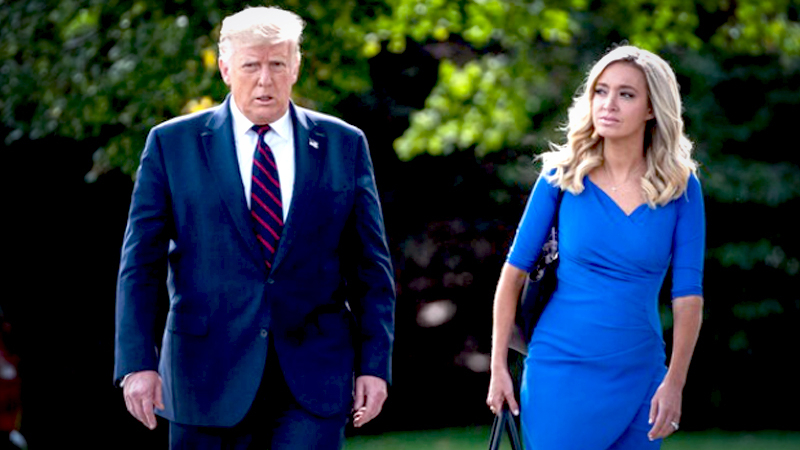 President Donald J. Trump walks with Press Secretary Kayleigh McEnany to board Marine One and depart from the South Lawn of the White House on Tuesday, Sept 15, 2020 in Washington, DC. MUST CREDIT: Washington Post photo by Jabin Botsford

WASHINGTON - President Donald Trump on Wednesday called on congressional Republicans to support a massive economic relief bill that would include stimulus payments for Americans, offering a much different plan than what the Senate GOP sought to advance in recent days.

House Democrats in May passed a $3.4 trillion bill that would include new $1,200 stimulus checks for millions of Americans. But that measure never became law because the White House rejected many other parts of the bill. Senate Republicans, meanwhile, have sought to advance a bill that would exclude the stimulus checks.

In a Twitter post on Wednesday, Trump mischaracterized Democrats' position by saying they were "heartless" for not wanting "to give STIMULUS PAYMENTS to people who desperately need the money, and whose fault it was NOT that the plague came in from China. Go for the much higher numbers, Republicans, it all comes back to the USA anyway(one way or another!.)"

Congress and the White House passed the Cares Act in March, which sent $1,200 checks to millions of Americans as a way to try and contain some of the economic fallout from the coronavirus pandemic. Those checks went to more than 100 million Americans, and Trump signaled on Wednesday that he wants to send another round of those checks, something Democrats have long supported.

But they have not been able to reach agreement because of other things Democrats want to put in the next relief bill, such as state aid, that the White House doesn't support.

Senate Republicans recently sought to advance a roughly $300 billion bill that would approve more unemployment benefits and small business aid, among other things, but the measure couldn't advance because it was blocked by Senate Democrats. House Democrats, meanwhile, are struggling to come up with a unified plan for how to negotiate with the White House after Trump keeps rejecting their proposals.

Trump senior adviser and son-in-law Jared Kushner on Tuesday said a deal might not come together until after the November elections.

House Speaker Nancy Pelosi, D-Calif., several weeks ago, said Democrats would offer concessions to their May proposal and agree to a more narrow package that was around $2.2 trillion.