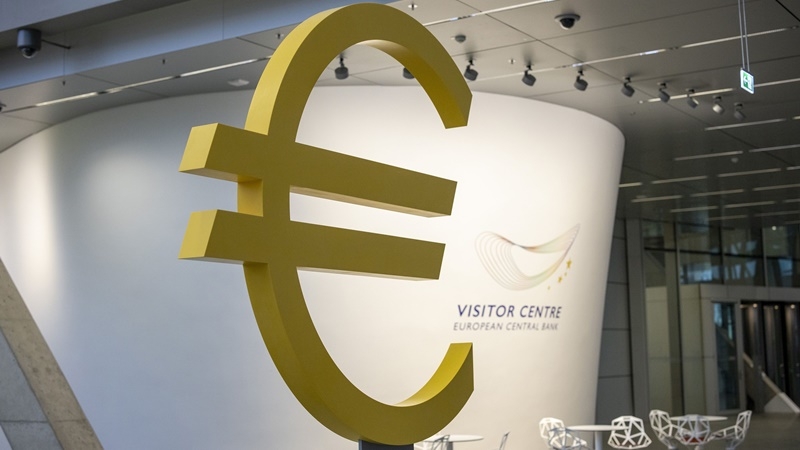 A euro currency symbol sits on display in the visitor centre at the European Central Bank (ECB) building in Frankfurt, Germany, on Nov. 4, 2019. MUST CREDIT: Bloomberg photo by Alex Kraus.

European regulators are moving closer to lifting a de-facto ban on bank dividend payments at the start of next year, according to people familiar with the matter.

Several members of the European Central Bank's supervisory board, who supported initial requests that banks forgo dividends, see further extensions of the ban doing more harm than good, the people said, asking not to be named because the deliberations are private.

European banking stocks pared declines on the news, with the 22-member Euro Stoxx Banks Index briefly erasing almost all losses for the day.

The ECB previously asked lenders not to make dividend payments to conserve capital and keep lending after the pandemic wreaked havoc on the economy. The move added to the hammering of bank stocks this year, yet the central bank indicated it was a trade-off for unprecedented regulatory relief it had granted them to weather the crisis.

The dividend debate will probably be decided by economic indicators, data on the volume of loans that are subject to payment holidays and an assessment of whether banks have set aside enough funds to cover losses from credit that could go bad next year, said the people.

The mood is shifting in favor of a return to dividends, though members are preparing for a debate in coming months with others who still want to keep the maximum amount of capital in the banking system in case the economy worsens further, said the people.

That position loses sight of the fact that well-capitalized banks need to to reward shareholders in order to retain their confidence and be viable in the longer term, say the proponents of a return to dividends.

The dividend ban has been particularly tough on French banks such as BNP Paribas SA, which had promised some of the fattest investor payouts this year before the pandemic hit. BNP has been leading a lobbying push to resume dividends, Bloomberg reported in June.

The ECB has said that it will review its stance in the fourth quarter. A spokeswoman declined to comment.

Regulators in other jurisdictions, including the Federal Reserve in the U.S., have allowed banks to continue to return at least some funds to shareholders, while encouraging caution. The Fed is considering extending caps on dividend payments and share buybacks it imposed on the biggest U.S. banks.

The ECB's initial ban had the supervisory board's unanimous approval. The consensus began to fray when it prolonged the request through the end of this year, with Germany allowing smaller banks to pay dividends in the fourth quarter, if they have the necessary financial strength, people familiar with the matter have said.

The ECB's measures to help lenders this year include allowing them to temporarily dip into their capital buffers and take a flexible approach to soured loans in order to give them the financial resources to swallow losses and keep lending.

"There's discussion on whether it's right that well capitalized banks aren't allowed to pay dividends if they can afford to do so," Anneli Tuominen, head of Finland's financial regulator and a member of the supervisory board, said in Helsinki earlier this month. "It's been argued that if better performing banks were able to pay dividends, then that would be a stigma for more poorly performing banks, weakening their situation further. These decisions need to be taken for the entire sector."

While other banking supervisors acknowledge the issue of stigma, they argue that investors will draw their own conclusions about the strength of banks based on their disclosed financial metrics, said the people familiar with the matter.