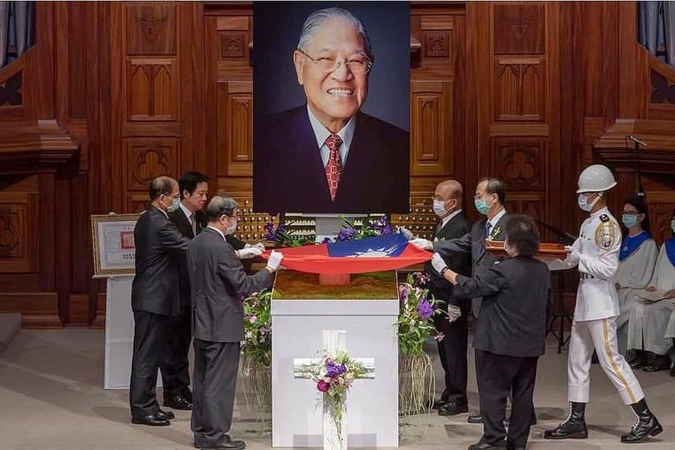 For a second day, Taiwan's air force scrambled jets after several Chinese fighters and bombers crossed the sensitive midline of the Taiwan Strait, as a top US diplomat wrapped up a whirlwind visit to the island that included a dinner with President Tsai Ing-wen.

The funeral service was held at a chapel in a Christian university in New Taipei City, and those in attendance included President Tsai and former vice-president Lien Chan. Mr Krach kept a low profile at the memorial, in line with the nature of his visit to Taiwan, which had been under wraps until the last minute.

Despite the trip being relatively low key compared to last month's visit by US Secretary of Health and Human Services Alex Azar, Mr Krach's presence still prompted Beijing to first send 18 military jets into the Taiwan Strait on Friday, and 19 jets yesterday.

Beijing also announced a military exercise near the Taiwan Strait.

On Thursday, the Chinese foreign ministry lambasted Mr Krach's visit, accusing the US of severely violating the one-China principle and undermining US-China ties. It also vowed to retaliate.

Its spokesman Wang Wenbin on Friday called the military exercise a "justifiable and necessary action taken in response to the current situation across the Taiwan Strait and to safeguard China's sovereignty and territorial integrity". A National Defence Ministry spokesman made similar remarks.

In a strident editorial yesterday, the Chinese state-backed tabloid Global Times said the latest exercise and previous drills have given the People's Liberation Army enough experience to attack Taiwan, calling them "rehearsals on taking over Taiwan".

What is missing now is a political reason for China to begin a real war to "smash Taiwan independence forces", the editorial also said, and called for both the US and Taiwan to not look upon the military exercise as a mere bluff.

The Taiwanese government has remained fairly quiet on Mr Krach's visit, saying little other than welcoming words and encouragement on fostering a stronger relationship with the US.

"Although it is a symbolic victory for Taiwan to have such a high-level politician visit, Tsai does not want to aggravate the PRC more than she has to - keeping his time in Taiwan short and without as much fanfare lets Taiwan enjoy the victory without flaunting it too much in the PRC's face," said Mr Lev Nachman, a Fulbright research fellow and PhD candidate who focuses on Taiwanese politics at the University of California, Irvine. He was using the acronym for People's Republic of China, the official name of China

Prior to Mr Krach's arrival, local media had reported that the visit would most likely be tied to an "economic and commercial dialogue" that the American Institute in Taiwan, the de facto US embassy, said would take place before the end of the year.

However, it seems that Mr Krach's main agenda was only to attend Mr Lee's funeral.

Mr Nachman said this seems to indicate trade talks may progress slower than initially thought, but sending Mr Krach to Taiwan, "shows a high level of commitment from the United States that they are serious about furthering relations with Taiwan, even if it does not necessarily happen overnight".

A former researcher at a government-affiliated think-tank said having both host and visitor keeping mum about the visit is an indicator of how the two sides may not have agreed on how to work together.

"Both sides want to strengthen collaboration, but the US wants to rebuild the supply chains and beef up the semiconductor industry. This goes against Taiwan's wishes to keep advanced technology in the island," said the former researcher who wished to remain anonymous.

He also noted the significance of the presence of Mr Morris Chang, former chief executive of Taiwan Semiconductor Manufacturing Company (TSMC), at a banquet Ms Tsai hosted for Mr Krach on Friday.

TSMC is the world's largest semiconductor foundry and Mr Chang was the only leading figure in tech present at the event.

"TSMC is extremely important to the US in its hopes to grow its own semiconductor industry and boost tech-based national security," said the former researcher.

"On this level, TSMC is a major chip for Taiwan to draw the US in, but how the chip should be used would be a challenge for the current administration."