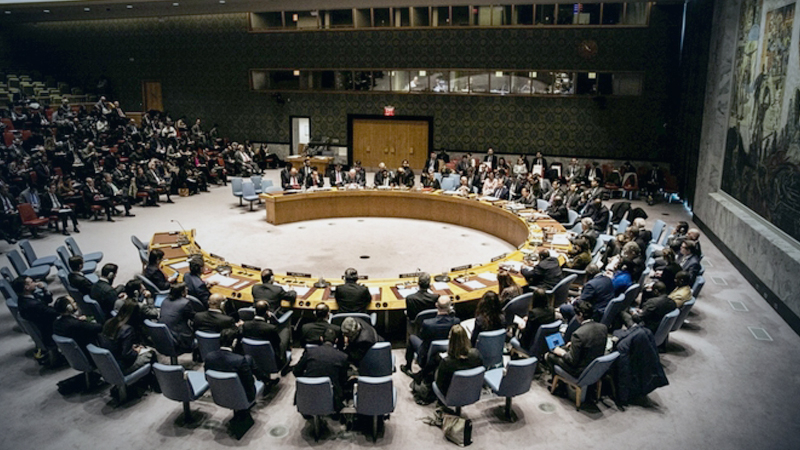 The United Nations Security Council meets to discuss Venezuela at the United Nations in New York on Jan. 26, 2019. The annual UN General Assembly, which usually brings about 10,000 diplomats to Manhattan, is being held virtually this week. MUST CREDIT: Bloomberg photo by Jeenah Moon Photo by: Jeenah Moon — Bloomberg Location: New York, United States

As the United Nations turns 75 this year, the world body keeps churning out increasingly grim reports on the global threats it was created to ameliorate.

Biodiversity is being destroyed, climate change is accelerating, war and famine are creating more refugees than ever in human history, the world body warns. And now the covid-19 pandemic is pushing hundreds of millions back into poverty as renewed lockdowns loom.

Deepening the gloom enveloping the world body, its annual UN General Assembly that usually brings about 10,000 diplomats to Manhattan is being held virtually this week, precluding the personal encounters among world leaders that sometimes offer glimmers of progress to seemingly intractable crises.

"It's one of the most challenging periods the UN has ever seen, whether you look at climate change, a socioeconomic meltdown due to the pandemic or global conflicts," said Jan Egeland, a former head of humanitarian affairs at the UN who now runs the Norwegian Refugee Council. "But we are seeing a gigantic clash between the ideals the UN stands for and the nationalism that is spreading like wildfire across many of its member states."

Each fall, the General Assembly becomes center stage for leaders to make their views heard across the world. Speeches run the gamut from fulminations against colonialism -- Cuba's Fidel Castro holds the UN record with a four-hour tirade in 1960 -- to the use of attention-grabbing props, such as the cartoon drawing of a bomb with a lit fuse that Israeli's Benjamin Netanyahu held up in 2012 to warn against Iran's nuclear ambitions.

This week, leaders will be sending videos to an empty hall instead. For Secretary General Antonio Guterres, who is organizing a virtual roundtable with climate leaders from government, business, and civil society on Thursday, it will be a missed opportunity.

"Diplomacy, to be effective, requires personal contact," he said at a news conference. "I'm very sorry that we are not going to have the opportunity to bring together leaders of countries involved in conflicts like the Libya conflict or like the Yemeni conflict or any other one, or leaders that have an important initiative in key areas, be it in relation to climate change, fighting against racism, in relation to gender equality, that we are not able to bring them together."

One bonus of the virtual format: UN officials expect leaders who usually send underlings to the General Assembly, including China's Xi Jinping and Russia's Vladimir Putin, to join in with remarks by video.

The speeches are likely to underscore a deepening contrast in visions. Leaders like French President Emmanuel Macron and German Chancellor Angela Merkel are expected to urge joint action to tackle urgent global problems.

"The UNGA high-level week will be an opportunity to reflect on the current covid-19 crisis, and to reaffirm the crucial role of the United Nations and of multilateral cooperation, which are badly needed in these times," French Ambassador Nicolas de Riviere told reporters.

But the first two speakers scheduled on Tuesday, Brazil's President Jair Bolsonaro and U.S. President Donald Trump, are likely to use the platform to highlight their nationalist approaches. For Trump, the opportunity comes exactly six weeks before the election in the U.S. as he trails he Democratic opponent, Joe Biden, in polls.

"Wise leaders always put the good of their own people and their own country first," Trump told the General Assembly last year. "The future does not belong to globalists. The future belongs to patriots."

The meeting comes as the U.S., the UN's largest donor, is increasingly clashing with the organization, most recently announcing a departure from the World Health Organization and angering Security Council members with its move to kill what remains of the multinational Iran nuclear accord. While Guterres has managed to maintain a cordial relationship with Trump, the president's advisers have urged him to reduce U.S. backing for the global body as a frequent impediment to U.S. interests.

"There's always been a U.S. ambivalence at the UN, but this is the first administration that really treats the UN with a degree of antipathy that we've never seen before," said Stewart Patrick, senior fellow on Global Governance and Multilateralism at the Council on Foreign Relations. "Other presidents have bemoaned the fact that the UN wasn't living up to its promise, but they've generally seen the UN as a beneficial organization. That's not clear anymore with this administration."

In addition to the online speeches, the General Assembly will feature a climate summit, a conference on Libya, a celebration of the 25th anniversary of the World Conference of Women, and a biodiversity forum -- all of them virtual.