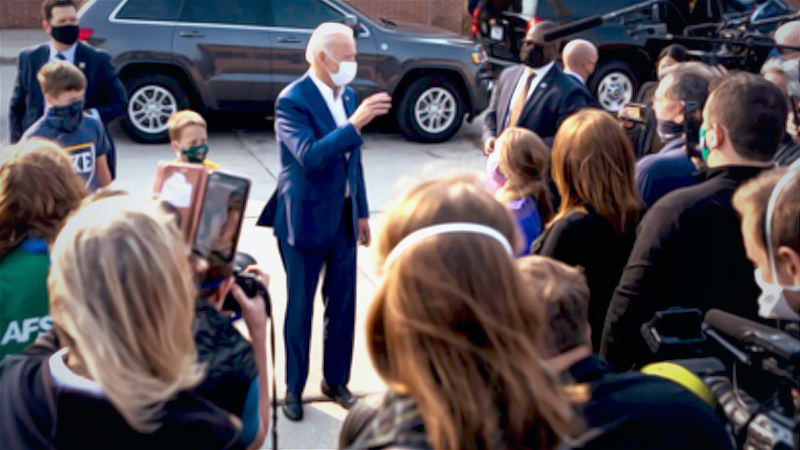 Joe Biden on Monday lamented the 200,000 U.S. deaths in the coronavirus pandemic, discussed the importance of unions, warned of the health risks posed by President Donald Trump's rallies, and touted his roots in Scranton, Pa.

But over nearly 30 minutes, speaking in a small industrial city in Wisconsin, he never mentioned the Supreme Court vacancy or the political earthquake that has followed the death of Justice Ruth Bader Ginsburg.

It was the clearest sign yet of Biden's belief that most voters are not animated by the divisive fight that is consuming many in Washington. His approach contrasts sharply with the bubbling anger among many Democrats over Republican tactics regarding the Supreme Court, a fury that began on the left but is seeping into the party's mainstream.

As Trump has made it clear that he intends to fill the court vacancy as swiftly as possible, Biden's restraint is the result of several days of intense debate inside his campaign. He showed on Monday that he sees little advantage in becoming embroiled in what's shaping up as a bare-knuckle fight bound to send Americans into their partisan corners.

Instead, Biden delivered a broad populist message including a direct appeal to Trump voters."I know many of you are frustrated. You're angry," he said. "You believe you weren't being seen, represented or heard. I get it. It has to change. And I promise you this: It will change with me."

In a call with Democratic congressional aides on Monday, Biden's team urged them to connect the Supreme Court vacancy to broader issues such as health care and immigration, according to a person familiar with the conversation. Several Democratic leaders have argued that a new conservative justice could mean the end of the Affordable Care Act, which faces a challenge before the court.

In an interview with Milwaukee television station WTMJ after his campaign stop, Biden explained his opposition to moving forward with a court nomination. "We're in the middle of an election," he said. "By the time that vote comes up - if it comes up - there will have been close to 40% of people that have already voted. It's a violation of the spirit of the Constitution to suggest that it should not wait until the outcome of the election."

Biden's approach raises the question of how he would react if Senate Republicans reject his pleas to step back from the brink and push ahead with confirmation hearings. If that happens, as seems likely, Biden will face great pressure from his liberal flank to adopt the more belligerent stance he has been studiously avoiding.

With few legislative options to block a confirmation, Democratic leaders are edging closer to threatening moves that have long been considered off limits. They are signaling that if they capture the White House and Senate, they might expand the Supreme Court by adding new justices and filling those slots with liberals.

That reflects a broader anger at what many in the party feel is a breakdown in the rules of American democracy - from gerrymandering to the electoral college, from the filibuster to attacks on voting. That has prompted more support for moves including ending the filibuster and creating statehood for Puerto Rico and the District of Columbia, which are heavily Democratic.

Biden - who has staked his candidacy largely on returning to normalcy, protecting institutions and forging bipartisanship - has been reluctant to consider such ideas.

But others in the party are increasingly expressing openness to them. Senate Minority Leader Chuck Schumer, D-N.Y., appearing with Rep. Alexandria Ocasio-Cortez, D-N.Y., at the steps of Ginsburg's former high school in New York on Sunday, was asked about expanding the Supreme Court and responded by saying that "once we win the majority, God willing, everything is on the table."

Sen. Elizabeth Warren, D-Mass., spoke Monday at an online kickoff of a new coalition of civil rights groups focused on goals such as expanding the Supreme Court, ending the filibuster, terminating the electoral college and granting statehood to D.C.

Asked why Democrats should push to change the court, Warren cited the 2018 confirmation battle over Justice Brett Kavanaugh, who had been accused of sexual misconduct when he was a student, something he forcefully denied, and then echoed Schumer's words from the night before.

"Leader Schumer is right. Everything should be on the table," Warren said.

One Biden adviser said over the weekend that the campaign was considering adding some nuance to Biden's response that would not completely close the door to adding justices. "He's going to make a really powerful case that it shouldn't have to come to that," said the adviser, who spoke on the condition of anonymity to discuss internal talks. "He's going to make the case for de-escalation."

Biden's campaign has been coordinating with Democratic leaders in the House and Senate over the past several days, according to a campaign aide. Biden has made public appeals to Republican senators, asking them to help him avoid a crisis. He apparently has not called them directly.

Aides to a number of key Senate Republicans - including Mitt Romney of Utah, Charles Grassley of Iowa and Lindsey Graham of South Carolina - said they have not heard from Biden. A spokeswoman for Lisa Murkowski of Alaska would not say whether Biden and the senator had spoken.

Brian Fallon, executive director of the group Demand Justice, which is working to make the courts more liberal, said he wishes that Biden would release a list of potential Supreme Court nominees, something the presidential nominee has steadfastly refused to do.

Still, Fallon said he is not distressed by what he is hearing from Biden.

"I don't expect Joe Biden to talk about it," he said of expanding the court. "If you're the Biden campaign, this is not the main message. I think they are smart to focus on the impact" of court fights over issues such as the Affordable Care Act.

Biden's job is to win in November, he said, and it is the job of activists to press these issues.

Stasha Rhodes, the campaign director for 51 for 51, which supports D.C. statehood, said her group is pushing to make expanding the court part of the national discussion about replacing Ginsburg. "People are talking more openly about it now," said Rhodes. "We have to make up for the seats that have already been stolen by McConnell and Republicans."

In the past, Biden has been adamantly opposed to the idea of expanding the Supreme Court, and the question is whether circumstances will now force him to soften his opposition. Some critics have warned of a scenario where each party expands the court every time it regains control of the Senate.

"I'm not prepared to go on and try to pack the court, because we'll live to rue that day," he told Iowa Starting Line in July 2019.

"We begin to lose any credibility the court has at all," he said in an October debate. "I would not pack the court."

Some Democrats say that even if most voters care little about the court itself, Ginsburg was unique: A justice who was crafted into an action figure, became the subject of movies, and evolved into a pop culture sensation known as the Notorious RBG. Her death, they argued, could galvanize voters in a unique way, especially women younger than 40.

But that activity is occurring without Biden.

"This is our stand. Everything the last four years has led to this moment," said Rachel Carmona, chief operating officer of Women's March, which co-hosted a vigil at the Supreme Court Saturday night. "No Democratic response should be off the table, including expanding the Supreme Court. We are in a life-and-death struggle for the soul of our country, and we should use any means necessary."

Alexis McGill Johnson, the president of the Planned Parenthood Action Fund, said Democrats should focus on what unites them - stopping a Trump nominee from getting confirmed - than on the things that could divide them, like expanding the court.

"What's important is to stay focused on the fight ahead," she said. "Our focus is that this seat under no circumstances should be filled until after Inauguration Day."

In a CNN poll in August, 39% of registered voters said nominations to the Supreme Court were extremely important to their vote, on par with race relations (40%), gun policy (40%) and health care (41%). The economy and health care were the top issues in the poll at 47% apiece, while climate change was lowest at 24%.

In a national survey conducted earlier this month by the Marquette Law School, a narrow majority of respondents opposed expanding the Supreme Court, with 46% favoring it and 53% against.

Biden made his comments Monday in Manitowoc, Wis., on a trip meant to appeal to Obama voters who fled to Trump in 2016. It was his second trip to Wisconsin, a state that Trump won by about 27,000 votes four years ago to become the first Republican presidential candidate to carry the state since 1984.

Striking a populist tone, Biden argued that Trump poses as a man of the people but is in fact an elitist who cares only about the wealthy and Wall Street. He reiterated that if he wins, he would be the first president in decades who had not attended an Ivy League school.

Biden, who was wearing a mask in accordance with Wisconsin health protocols, also remarked on Trump's rallies, saying the president endangers his supporters and has contempt for them.

"He loves his rallies. The next time he holds one, look closely," Biden said. "Trump keeps his distance from anyone at the rally. The folks who come are packed in tight as they can be - risking disease, mostly without masks. But not Trump. He safely keeps his distance."