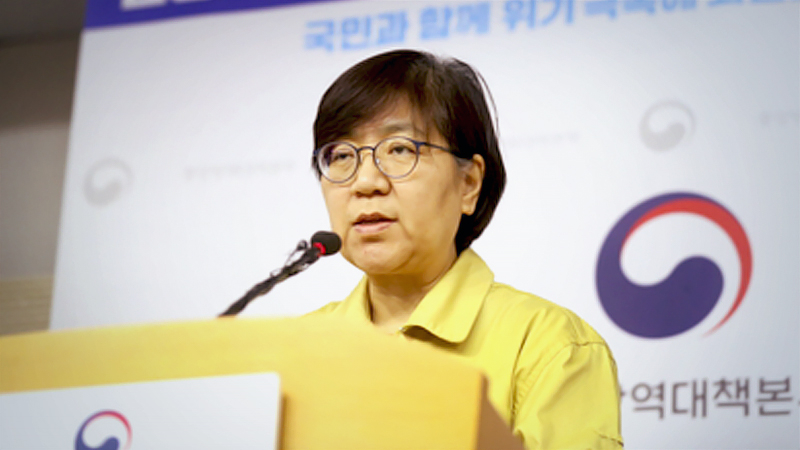 A Seoul woman in her 20s tested positive for the novel coronavirus for a second time in April after she was declared recovered approximately a week earlier, Korean health authorities said Monday.

Jung Eun-kyeong, chief of the Korea Disease Control and Prevention Agency, said in a news briefing that the young patient had a second episode of COVID-19 about six days after two consecutive RT-PCR assays showed she was negative.

“The investigation on this case is not yet complete to conclude that this counts as a ‘reinfection,’” she said.

The national disease control agency’s deputy chief Kwon Jun-wook said in a Monday briefing that the Seoul woman’s case is suspected to be “successive infections with two variants of the virus -- namely, the clades V and GH.”

Another potential explanation is that she may have contracted the virus before she was able to develop an immune response, Kwon said. In both episodes of infection, she experienced mild symptoms, such as cough and sputum.

At least 705 people have tested positive a second time after recovering since February, none of whom officially qualify as a reinfection according to health authorities.

The clinical committee for emerging infectious diseases within the National Medical Center said in an April press conference that the “second positive” cases here were the result of the assays responding to “inactive viral particles.”

Kim said the possibility of repeated infections means that COVID-19 may have "become endemic much like the flu." But good news is that so far, the new coronavirus seems to mutate at a slower rate than the influenza.

“A close follow-up on former patients who are experiencing a relapse in symptoms is needed to help us gain better insight,” he said.

“Coinfections, second infections are witnessed in other viral respiratory illnesses like the cold,” she said. “Except with COVID-19, it’s much more contagious.”

For 28.8 percent of Seoul patients diagnosed Sept. 13-19, the point of transmission was unknown -- marking the highest since the disease appeared in the country. Since mid-August, the rate has consistently remained above 20 percent.

Preventive medicine specialist Dr. Ki Mo-ran of the National Cancer Center said the contact tracing failures may be attributable to the higher number of older patients being discovered in the lingering resurgence from last month.

“Contact tracing relies heavily on technologies such as smartphone data and credit card records. This may not work well for older patients who tend to be less digitally connected,” she said.

Ki said as contact tracing efforts fall short, there could be several dozens of people who are going undiagnosed. “We are walking on thin ice here,” she said. “The numbers have to be brought down to manageable levels with strict physical distancing.”

Health authorities said there will be “special physical distancing restrictions” put in place for the upcoming Chuseok holiday, falling Sept. 30-Oct. 4, the details of which will be disclosed later in the week.

Korea confirmed 70 more cases of the coronavirus in the last 24 hours ending Sunday midnight, pushing the cumulative total to 23,045.

Two more patients died. So far, there have been 385 known deaths related to COVID-19, which brings the overall fatality rate to 1.67 percent. For those over 80, the rate is 20.6 percent.

As of Sunday, 91 percent of the country’s 517 intensive care beds were full, leaving only 46 available. At designated coronavirus hospitals, whose combined bed capacity is 4,120, the occupancy rate was 32.5 percent.

In late June, the bar for discharging patients was adjusted to allow patients who remain free of symptoms for 10 days in a row after diagnosis to be released from isolation. Previously, two negative results on RT-PCR tests with at least a 24-hour interval were required to be deemed recovered.

Korea has carried out 2,206,365 tests since Jan. 3. This translates to around 43,518 tests performed per million people. Of all tests taken, around 1 percent yielded positive results.