A man was killed and his parents seriously injured when their car was crushed by an 18-wheel trailer truck on Wednesday (September 23) morning on Suwintawong Road in Bangkok’s Minburi district.

Minburi Police Station was alerted of the accident at 6.20am and showed up at the site, intersection in front of the Minburi Metropolitan Electricity Authority, to find that the trailer had damaged five other cars in addition to the Toyota Corona.

The driver of the Toyota Corona was found dead and stuck in the wreckage. He was later identified as Arnus Jiloh, 27.

The passengers in the car – his parents, Prasert and Amporn, both 52 – were found to be injured and rushed to Nopparat 9 Hospital. 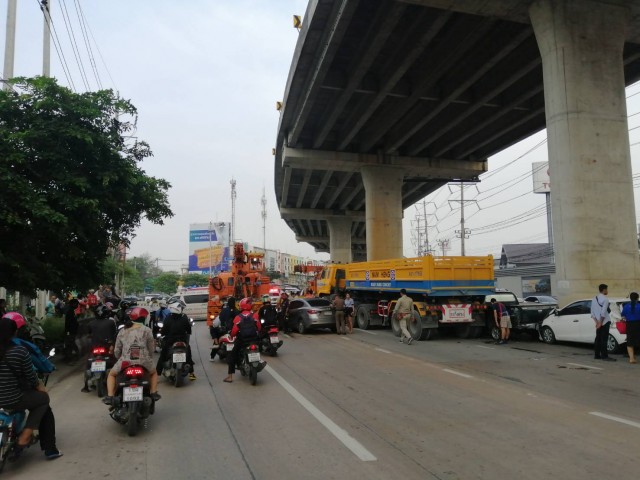 The 41-year-old truck driver Phian Srijaroen was arrested over charges of negligent manslaughter.

Phian reportedly said he was driving from Saraburi to deliver construction materials to a customer in Soi Suwintawong 18.

“Before the accident I noticed that the air brake only had 6 per cent of pressure left, while the primary brake which uses oil has been out of order,” he said. “As I approached the intersection, I applied the brake but lost control of the truck and hit other cars before climbing onto the Toyota Corona.”

Police are interviewing witnesses and reviewing CCTV footage to determine the cause of accident.