Mike Fratantuono, manager of Sunset Restaurant in Glen Burnie, Md., weighs in on the death of a family business. MUST CREDIT: Photo by Matt Roth for The Washington Post

By The Washington Post · As told to Eli Saslow · NATIONAL, BUSINESS, HEALTH

I grew up inside this restaurant, and now my wife's helping out in the dining room and my daughter's working at the hostess stand. This is a family place - four generations and counting. I know every inch of pipe and wire we have running through here. I've been the plumber, the busboy, the handyman, the butcher, the bartender, the prep cook, the manager. I've done every job there is in this restaurant, and now I'm the one who has to shut us down.

It kills me. We were supposed to be getting ready to celebrate our 60th anniversary this year, and instead we're packing up and closing at the end of this month. I'll find another job, but it's more than that. It's home. These walls are like a family photo album. I try not to get too sentimental about it, because it won't change a damn thing, but sometimes the stress hits me and my heart starts going like crazy. I get frustrated. It makes me angry. How does this whole situation make any sense? I don't know a single person that's gotten covid, and I know that's probably lucky, but right now I can tell you about at least a dozen businesses going under and a few hundred people going broke. 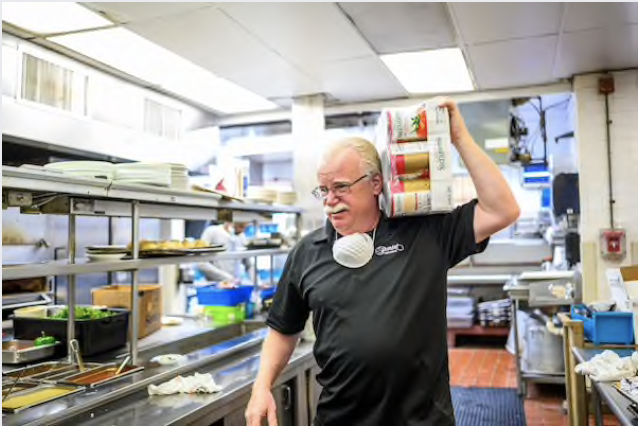 I know this virus is real, OK? It's real and it's awful. I'm not disputing any of that. But our national hysteria is worse. We allowed the virus to take over our economy, our small businesses, our schools, our social lives, our whole quality of life. We surrendered, and now everything's infected.

I like to believe this restaurant is resilient. We tried to outlast it. My father worked here five days a week until he died at age 82, so that's in our DNA. When the governor first shut us down in March, I got together with my brother and my cousin, and we agreed to think of this as an opportunity. The restaurant was doing pretty good at that point. We had a little money to spend. We said: "Let's reinvest back in the business like it's supposed to be done." We remodeled the entire bar. We put in new bathrooms and new draft lines. We gave a tour to a few of our loyal customers, and they said: "Wow. When this place opens up, you're going to fill it every day. You'll be back bigger than ever."

At first the state was only allowing us do carryout. So, OK. We've got five dining rooms, 85 employees, and 13,000 square feet of space, and now you want us to operate like your regular old burger shack? How many people do you know who are willing to spend $40 on a lukewarm steak that's traveled halfway across town? That's not our typical business. We're old school. We don't have frozen hot wings that we heat up and toss in a cardboard box in five minutes. We buy the chicken fresh, cut off the fat, pound it out and bread it. Your wings take 25 minutes while you're enjoying a conversation and a cocktail or two. But that's the old world, right? What choice did we have? We redid our carryout menu to cut the prices down and teamed up with DoorDash and Grubhub. We created themed menus for Mother's Day and Easter. We delivered charity meals out to the hospitals and opened up a crab trailer out front so we could sell by the bushel. We were spending $800 a week on carryout containers, and there's no real profit in any of it. You lose out on booze. You don't get the same tips. We kept hanging on through March, April and May, but our revenue was down more than 80 %. We had to lay off 75 people. That's 75 families dealing with unemployment and financial hardships, and not because a virus made any of them sick.

When the state opened up for outdoor dining, I ran out to every Costco in the area and bought any picnic table I could find. We got 20 for $150 a piece. We roped off the parking lot and put out buckets of cold beer. We tried to make it look nice, but it's summer in Baltimore, and it's 90-some degrees outside and you're selling cream of crab soup to people who are sweating on the asphalt. Nobody really came. Why would they come? We stood out there for nine hours each day and we waited.

We got more creative. We kept on trying. We opened up at 50% capacity and had live music, themed dinners, mystery nights and a meal with a psychic. We reinvented this restaurant a dozen times, but none of it worked.

And what kind of support did we get? More rules. More restrictions. More regulations, mandates and curfews. We have to close at 10 p.m., because I guess maybe covid comes out at 10:01 - except apparently not at the casino down the road, because they have political leverage, and they get to stay open as long as they want. You can sit at our bar and have a drink, but you can't get up and mingle, because that's considered a health violation, so now I'm trying to serve you and police you at the same time. "Thanks for coming! We really need your business. Now put on your mask or sit the hell back down!" I have to buy disinfectants, individual ketchups, paper menus, and personal salt-and-pepper shakers or else I might get fined. My employees have to wear their masks all the time, even when they're alone in an office, but meanwhile we have a group of 40 people in the dining room with no masks on, and that's deemed safe because they're drinking water? None of it makes any sense.

We had a customer come in the other day, and she couldn't get seated because we had a few other tables, and we'd hit our 50% capacity in the one dining room she likes. I had to ask her to wait. I'd rather sit her down and take her money. I hate this rule, but now I have to enforce it. But she could see all the empty tables, and she didn't understand it. She got mad and decided to call 911 and tell them we were over capacity. Two armed police officers came through here. The whole foyer was empty. There was nobody at the bar. I've got a max fire rating on the wall for 323 people, and they couldn't count up to 100. I told them: "I dream about being over capacity, but I doubt it will happen again."

It's like Trump said: The cure has been worse than the disease. People spent too much time at home watching the news all day, drinking in this hysteria until they were spraying down their groceries and afraid to leave home. It became another anti-Trump thing in the press. The impeachment didn't work, the killer bees didn't work, so let's blow covid out of proportion and see if it hurts him. But it's the rest of us that got hurt. It was day after day of failure. It was a slow and painful death.

We went to see our accountant at the end of the summer. He looked over the numbers but he didn't say much, and that's not like him. I said: "What would you do?" He said the way things were going, we'd have nothing left to lose within a few months.

We made the decision right then. There wasn't much to discuss.

Our last day is September 30th, and then we're done.