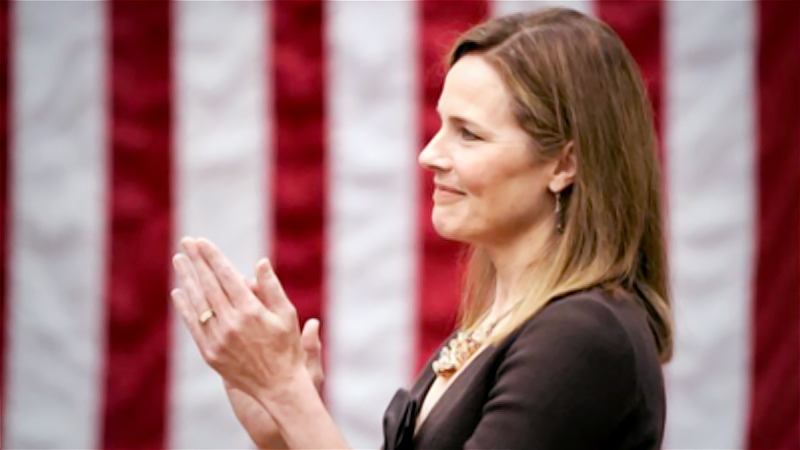 Judge Amy Coney Barrett applauds as President Trump announces her nomination to the Supreme Court on Saturday night at the White House. MUST CREDIT: Washington Post photo by Jabin Botsford

WASHINGTON - President Donald Trump announced Saturday that he will nominate federal appeals court Judge Amy Coney Barrett to the Supreme Court, a choice that would lock a conservative majority on the high court and that could help turn out Republican voters in the election less than six weeks away.

Barrett, 48, would fill the vacancy left by the death of Justice Ruth Bader Ginsburg, preserving the court's gender balance of three women and six men while potentially tipping its ideological balance for decades. 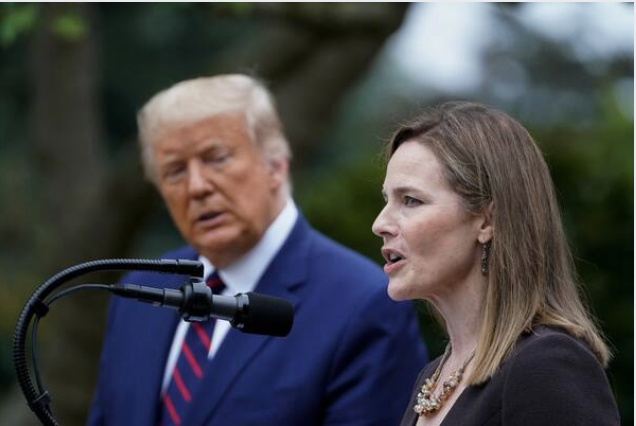 Trump introduced Barrett in a Rose Garden ceremony attended by a who's who of Republicans and conservative activists, a reminder that shifting the Supreme Court to the ideological right has been a decades-long focus for the GOP.

"Amy Coney Barrett will decide cases based on the text of the Constitution as written," Trump said, as the nominee stood beside him. "As Amy has said, being a judge takes courage. You are not there to decide cases as you may prefer. You are there to do your duty and to follow the law, wherever it may take you." 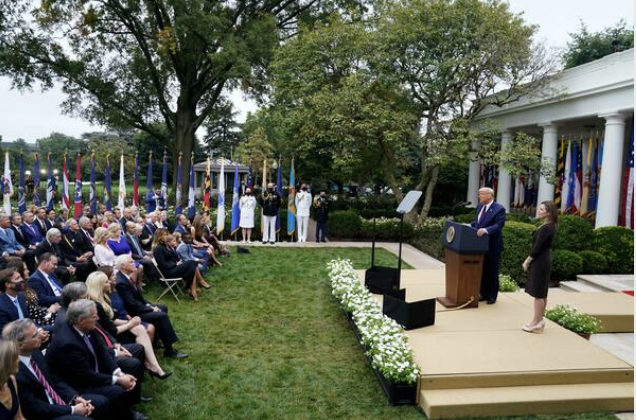 Neither Trump nor Barrett wore face masks as recommended by public health officials to reduce the spread of the coronavirus, and few in the crowd did either. Guests were seated close together, rather than the recommended six feet apart, and hugged and kissed one another.

Trump and Barrett praised Ginsburg as a trailblazer, and Barrett said she would do the job of a justice "mindful of who came before me."

Their views and backgrounds could not be more different, however, as the deeply conservative Barrett made clear with a tribute to the late Antonin Scalia, the conservative jurist for whom she was a law clerk and who she said was her legal role model.

"I have no illusions that the road ahead of me will be easy, either for the short term or the long haul. I never imagined that I would find myself in this position, but now that I am, I assure you that I will meet the challenge with both humility and courage," Barrett said, adding that she looked forward to meeting with senators.

The judge for the U.S. Court of Appeals for the 7th Circuit is expected to be confirmed swiftly by the Republican-majority Senate and could be seated before the Nov. 3 election, the resolution of which Trump has predicted could end up before the Supreme Court.

Democrats, with little chance of derailing the nomination, say they are being steamrolled. Some in the party are refusing to meet with Coney Barrett, while liberal activists are pushing Democratic lawmakers for more drastic moves such as boycotting the confirmation hearings.

Senate Republicans were preparing to accelerate the confirmation process as soon as the announcement was made, with Senate Majority Leader Mitch McConnell, R-Ky., planning to meet with Barrett on Tuesday, according to an aide.

Senate Judiciary Committee Chairman Lindsey Graham, R-S.C., confirmed in an interview with Fox News on Saturday night that the hearings for Barrett will begin Oct. 12 with opening statements, with questions to take place Oct. 13 and 14. There will be testimony from outside witnesses at some point, he said, and the committee process will begin Oct. 15 - meaning a panel vote on the nomination could come as early as Oct. 22 under Judiciary rules.

"I expect they're going to throw the kitchen sink at us," Sen. John Barrasso of Wyoming, the No. 3 in Senate GOP leadership, said in an interview Saturday. But he said he was confident Barrett would be confirmed before the election "if everything moves along smoothly."

The prospect of conservative judges and a shift on the high court helped Trump, with few ideological lodestars, win over skeptical Republicans in 2016, and he has been unapologetic about using this surprise vacancy to further his chances for reelection.

"Fill that seat" has been a featured chant at Trump's political rallies over the past week, and his campaign is raising money with messages to supporters that tout the president's Supreme Court pick. Republicans also started selling a T-shirt Saturday that appropriated Ginsburg's pop-culture-inspired nickname, "Notorious RBG." The shirts say "Notorious ACB."

Ginsburg lay in state at the U.S. Capitol this past week - the first woman to be so honored - and is expected be buried alongside her husband, Marty, at Arlington National Cemetery in the coming week.

The election was not mentioned during the White House announcement, nor was abortion, the issue on which many senators of both parties are likely to base their vote on Barrett.

Democratic presidential nominee Joe Biden issued a statement on the nomination that focused on the coronavirus and the future of the Affordable Care Act, which is back before the high court in the term that begins Oct. 5.

"She has a written track record of disagreeing with the U.S. Supreme Court's decision upholding the Affordable Care Act" in 2012, Biden said, noting that Barrett had also criticized Chief Justice John Roberts Jr. for his deciding vote in that case.

The 16 days from Barrett's nomination to the start of her confirmation hearings would be the shortest in recent memory. Since 1990, it has taken an average of 50 days from a Supreme Court pick's nomination to the start of his or her confirmation hearings - significantly shortcutting the time available for senators to examine Barrett's record, read through her writings and to prepare questions for the hearings.

GOP leaders are aiming for a final confirmation vote just days before Election Day, a goal they say is feasible in part because Barrett's record and background were already scrutinized during her bitter 2017 confirmation to the federal bench.

Democrats cited McConnell's 2016 refusal to hold hearings for President Barack Obama's last Supreme Court nominee, Judge Merrick Garland, on the theory that voters in that year's presidential election should have their say first.

McConnell and Graham have reversed themselves to say that Trump's confirmation pick should go forward before the election.

In a statement Saturday, Graham pledged to seek "a challenging, fair, and respectful hearing" but did not spell out a timeline.

"That would be a discussion for the senators. I would believe that they're going to try to move through the process and review her credentials in an expeditious manner," Meadows told reporters at the White House.

"The authority of the chairman to rush this process in a way that he's determined to do is such a mockery and travesty," Sen. Richard Blumenthal, D-Conn., a member of the Judiciary Committee, said in an interview.

Blumenthal has said he does not plan to meet with Barrett, a departure from past confirmations.

Barrett is already well known to Republican senators, many of whom had hoped Trump would pick her for the next vacancy. When Trump said he would consider only women to fill Ginsburg's seat, Barrett became the automatic favorite.

Trump said he considered five women, but Barrett is the only one he is known to have interviewed in person.

McConnell made known to Trump his preference for Barrett, since his ranks were the most familiar with her. Although her writings on precedent and personal antiabortion views could be a significant obstacle for Sens. Susan Collins, R-Maine, and Lisa Murkowski, R-Alaska - who support access to abortion - both have said they do not support holding a confirmation vote before the election anyway. That cleared the way for Trump and McConnell to push through the most conservative candidate possible.

As he departed the White House for a Saturday night rally in Pennsylvania, Trump told reporters he did not discuss abortion with Barrett during their interview. "I never discussed that with Amy" and the court itself is "going to have to make that decision," he said.

At the rally, he said that "most important of all she will defend your God-given rights and freedoms." People behind Trump wore MAGA hats and MAGA masks and held signs saying "Fill That Seat" and "Peaceful Protester."

Senators such as Todd Young, R-Ind., have spoken personally with the president to lobby for Barrett, and Sen. Ben Sasse, R-Neb., has had eight conversations with Trump to push for her as an eventual Supreme Court nominee.

Sasse noted that a wide cross-section of Notre Dame faculty - from traditional conservatives to liberal Catholics - have admired Barrett, even if they don't agree with her jurisprudence.

Sen. Mike Braun, R-Ind., said it would be a "major disappointment" if Senate Republicans do not confirm Barrett before Election Day. He anticipated that it would only be delayed until after Nov. 3 if there are "some of the antics that were pulled during the Kavanaugh hearing."

Trump has told allies that Barrett would be a justice in the mold of Scalia, and Scalia's son, Labor Secretary Eugene Scalia, attended Saturday's ceremony and a fundraising reception Friday at the Trump International Hotel, where Trump polled supporters on what they thought of his choice.

Although the group expressed strong support for her, it was not unanimous, according to people familiar with the closed-door event, who spoke on the condition of anonymity to describe the confidential discussion.

When Brian Ballard, a top donor and Florida lobbyist, suggested that he liked federal appellate Judge Barbara Lagoa, Trump said that Ballard should tell Lagoa that she would eventually have her time, two people familiar with the comments said.

Lagoa was considered the other front-runner. Although Trump had said he would probably meet with Lagoa when he visited Florida on Thursday and Friday, he told reporters Friday that he had not done so.

Trump has asked political operatives Corey Lewandowski and David Bossie to help work on the confirmation on the outside of the White House apparatus, officials said, and both men have begun meetings with allies.

Less influential in this year's discussions was Leonard A. Leo, the powerful Republican activist who originally helped get Barrett on a list of conservative candidates that Trump said he would use to make his court picks, although Leo said he supports the choice.

"In nominating Amy Barrett to the Supreme Court, President Trump has again fulfilled his promise to appoint justices who are not only exceptionally qualified, but willing to bravely stand up for the Constitution as it's written and not bend to political pressures or personal preferences," Leo said. "Judge Barrett will be a great role model for future generations seeking to ensure that the rule of law advances the dignity of all people."

Barrett would join Justices Neil Gorsuch and Brett Kavanaugh, both in their 50s, as Trump's choices for the Supreme Court. All could serve for decades, ensuring that Trump's stamp on the court would last far beyond his presidency, whether he is reelected this year or not.

Youth activists representing the advocacy groups March for Our Lives and Demand Justice drew a massive chalk mural on the street in front of McConnell's D.C. home.

Demand Justice, a liberal group that advocates against conservatives' stacking of federal courts, also unveiled a new domain name Friday night: www.amyconeybarrett.com. The URL opens to a page on the group's website dedicated to blocking her confirmation.

"Amy Coney Barrett would threaten your health care and your reproductive freedom. We have to stop her," it says.