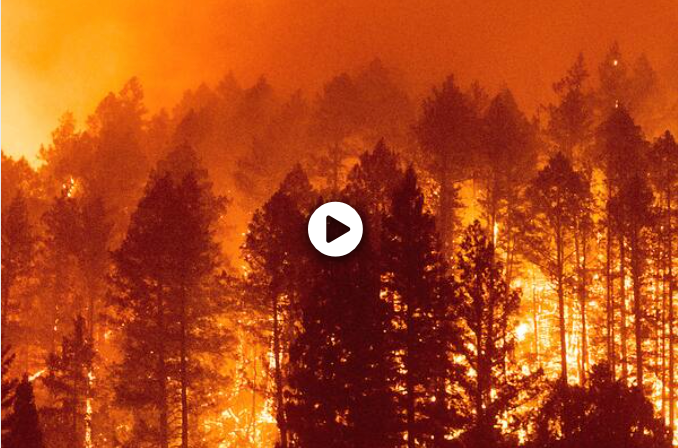 Swiftly moving wildfires roared into parts of Santa Rosa, Calif., Sunday night and Monday morning, causing damage in the eastern parts of the community and sending tens of thousands fleeing during hasty nighttime evacuations. Additional evacuations had been ordered throughout Monday.

The fires have erupted during yet another in a series of heat waves that have shattered records across the state since August, and dry offshore winds are pushing the flames to spread rapidly downwind.

Homes were engulfed in flames in the Skyhawk neighborhood in eastern Santa Rosa as the Shady and Glass fires advanced into the community. The Shady Fire began Sunday night in Napa County, near the Glass Fire that had begun early Sunday. The cause of both blazes are under investigation.

The Shady Fire jumped Highway 12 in Oakmont and forced a 5,000-person senior community to be evacuated by bus. Local news reports indicate that the fire has engulfed some homes in that community. Evacuation orders extended into the eastern periphery of Santa Rosa while an evacuation warning was in effect for the city itself. An evacuation warning is not the same as an order; it puts residents on notice that an order could come at any time and advises that they be ready to flee.

Fires were burning Monday morning in Sonoma and Napa counties, raising fears of the devastation wrought by the Wine Country fires of 2017, when Santa Rosa was heavily damaged. In Napa County, the Glass Fire ignited Sunday and spread quickly as dry winds picked up. CalFire tweeted that it had burned 11,000 acres as of Monday morning.

The Sacramento Bee reported the Chateau Boswell Winery was engulfed in flames in video recorded by Bee visual journalist Daniel Kim, on the Silverado Trail outside St. Helena. The Glass Mountain Inn also burned, the paper reported. Wineries had already been heavily impacted by the smoke from nearby blazes that is affecting their grapes, and other facilities had burned in previous fires this season.

Farther north, the Zogg Fire in Shasta County, southwest of Redding, continues to expand and may combine with the state's largest blaze on record, known as the August Complex, burning nearby. Local law enforcement announced Monday afternoon that three people had died in the Zogg Fire.

It's not just new blazes that Californians were dealing with Monday. The North Complex Fire in Butte County spread amid the more dangerous fire conditions, prompting various forms of evacuation warnings along its western side, including places heavily impacted by the Camp Fire in 2018, which was California's deadliest blaze. Paradise, Calif., which was nearly wiped out by that fire, was placed under an evacuation warning Sunday night.

The North Complex is already responsible for killing 15 during the last heat wave, which occurred in mid-September.

California is locked into a weather pattern featuring repeated areas of strong high pressure, or heat domes, that deflect any storminess and lead to hot and dry conditions. The area of high pressure parked over the West right now is unusually strong for this time of year.

The wildfires that began during a heat wave in mid-August have burned a record expanse of more than 3.7 million acres and killed 26, according to Cal Fire. Five of the state's top 20 largest fires have occurred in 2020, including the largest, known as the August Complex.

The ongoing heat and dry wind event is slated to last through the week, though the most dangerous period in wine country as well as other parts of Northern California looks to be through tonight, as dry winds combine with the high temperatures to create tinder dry conditions.

The periods of "critical" wildfire risks - the highest fire-threat category, are occurring through Monday.

Red flag warnings for high fire danger are posted across much of Northern California through 9 p.m. Monday, with the Sacramento Valley and North Bay mountains expected to see the strongest winds. Gusts between 25 and 40 mph will be common but may exceed that, at up to 65 mph, in some locations.

"Incredible ongoing fire weather conditions," tweeted Nick Nauslar, a meteorologist with the National Interagency Fire Center, noting that winds were gusting to 56 mph in the ridge near Santa Rosa, with relative humidity levels of 11 to 14%.

Roger Gass, a meteorologist with the Bay Area forecast office of the National Weather Service, said that while the strong winds are expected to diminish into Monday evening in the vicinity of Santa Rosa, the very dry air will persist.

"Other than the wind, what's important is that humidity really bottomed out into the teens during the overnight hours," he said. Higher humidity could help to ease fire activity. "We are going to continue to see critically dry humidities throughout the day - so that won't help with firefighting efforts," he said in an interview.

In the Los Angeles, red flag warnings are in effect through 5 p.m. local time Monday, with the worst conditions occurring in Ventura and Los Angeles counties as well as the Santa Clarita Valley. Winds up to 40 mph are expected, along with humidity levels dropping into the teens and single digits. These conditions could lead to "extreme fire behavior," the Weather Service warned. In L.A. County, firefighters have been working to shore up containment zones around the Bobcat Fire.

The worst fire-fanning winds are predicted to subside by Tuesday, but hot, dry conditions conducive to fires are forecast to linger for much of this week over the West.

"Elevated fire weather conditions will continue across all areas," the Weather Service office in Los Angeles wrote, regarding the forecast for Southern California.

California is only now getting into its traditional land-to-sea wind season, when it typically sees some of its worst wildfires.

Scientists say California's 2020 fire season, and the severe blazes that have extended north to Oregon and Washington, have clear links to human-caused climate change. There has been an increase in acres burned in large fires across the West due to global warming, and projections show the region becoming hotter and drier, making the region more susceptible to fires. A study published in August shows that California's frequency of fall days with extreme fire-weather conditions has already more than doubled since the 1980s.

Because of repeated heat waves and a lack of summer monsoon rain, Forest Service data shows Southern California mountains are at or near record-dry levels for this time of year.