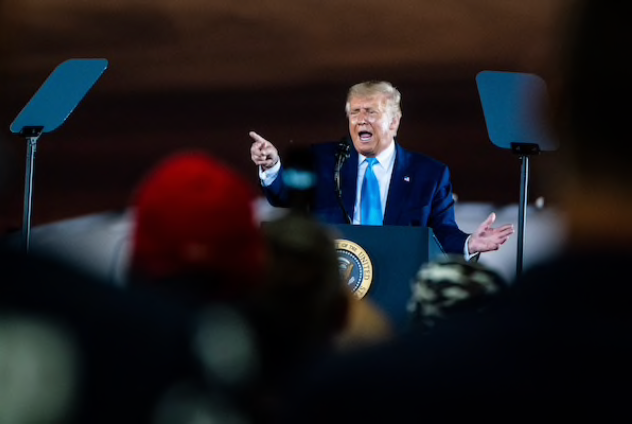 On Sunday, the New York Times reported it had obtained nearly two decades' worth of President Donald Trump's tax information. Since then, most public attention has focused on what the Times reported about Trump's federal income tax payments: He paid just $750 for the year in 2016, and then another $750 for 2017.

But the Times story also revealed three arrangements in which Trump's company had used the U.S. tax code to its benefit - to lower Trump's taxes, or to make the IRS refund tens of millions in taxes he already paid.

In these three cases, tax law experts say, Trump's company ventured into complex legal territory - areas in which other companies have faced penalties for stretching the rules too far. Both the Trump Organization and the IRS did not respond to requests for comment.

Here's what we know, courtesy of the Times's reporting:

1.) Trump obtained a massive tax refund based on a claim of $700 million in losses from an "abandoned" business.

The Times story says that Trump obtained a $72.9 million tax refund from the IRS in 2010 and that he has spent the last nine years battling the agency over whether that refund was proper. The Times said Trump got the refund, in part, because he claimed more than $700 million in losses from a partnership he had "abandoned" in 2009.

The Times said it could not identify the partnership that formed the basis for this refund but, based on timing, said it may have been Trump's troubled Atlantic City casino business.

Tax law experts said the "abandonment" provision in the law allows taxpayers to walk away from a partnership and then claim credit for years' worth of losses from the partnership. But there's a catch: If the taxpayer got anything valuable out of the partnership's end - even the forgiveness of a debt - then the provision doesn't apply. The taxpayer can claim far less tax benefits from his or her losses.

"Not a dollar. Nothing. Not one penny," said Mark Cook, a partner at the accounting and consulting firm SingerLewak in Irvine, Calif. "The moment you get anything, even the slightest amount of value," then the tax benefits decline sharply, he said.

In this case, the Times reported Trump did get something out of the end of his casino business: a 5% interest in a new casino company. That, experts said, could make it harder to claim he "abandoned" his business and got nothing in return - and, in turn, make it harder to hold on to that massive refund.

2.) Trump claimed an estate in suburban New York was an "investment property."

Trump owns an estate called Seven Springs in Westchester County, N.Y., which is already at the center of an investigation by New York Democratic Attorney General Letitia James. In that investigation, the attorney general has said she wants to know if Trump put an inflated value on that property before he put a conservation easement on it. That easement - in effect, a promise not to develop the land - brought tax benefits to Trump, and the benefits would have increased if the land's value was inflated.

The attorney general has said she has not yet concluded if Trump's company did anything improper. Manhattan District Attorney Cyrus Vance Jr., a Democrat, has also sought Trump's tax returns but has given few details about what he is investigating.

The Times story raised a question about the Seven Springs estate's role in Trump's taxes. It said in 2014, Trump classified Seven Springs as an investment property rather than a personal residence. That allowed him to write-off of $2.2 million in property taxes as a business expense, the newspaper said.

The Times said there is no public indication the IRS has challenged Trump's write-off in this case.

If the Trump Organization does regard that property as an investment, it does not appear to have brought much financial return recently. On Trump's official financial disclosures, he said Seven Springs has only produced between $5,000 and $10,000 in total income since 2015. The disclosures describe this income as "interest" but do not give further details.

Trump's family members have described Seven Springs in the past as a family retreat. The president's son, Eric Trump, told Forbes in 2014 that he had "spent so much of my life" at Seven Springs.

Brian Galle, a law professor and tax expert at Georgetown University, said that if Trump's "kids are using it as a weekend getaway, that would be personal use and not investment use." That would mean the property taxes could not be deducted on that scale, Galle said.

3.) Trump claimed credit for "consulting fees," at least some of which appear to have been paid to his family members.

The Times wrote Trump had written off $26 million in consulting fees between 2010 and 2018. It said some of those fees appeared to have been paid to Ivanka Trump, the president's daughter, who was also an employee of the Trump Organization at the time.

A spokesperson for Ivanka Trump did not respond to a request for comment.

Previously, tax courts have held that - in order for payments like this one to be deductible - the recipient must actually have provided a service in exchange for the fee.

In a 2011 tax court case, a judge ruled that an Illinois accounting firm could not deduct $3 million in "consulting fees" it had paid to shell companies run by the firm's own founders. The shell companies themselves had provided no services, the court ruled. The firm had to pay back taxes, plus penalties.

"We find that the firm intended for the payments to the related entities to distribute profits, not to compensate for services," the U.S. Tax Court ruled in the case, called Mulcahy v. Commissioner.