A Washington Post reporter and two colleagues were obviously followed by about a dozen cars during their trip to Kashgar. CREDIT: Photo by Lorenz Huber for The Washington Post.

KASHGAR, China -The first pair of enforcers were waiting at the temperature check before baggage claim at the airport in China's western Xinjiang region. "Passports," they said as the three foreign journalists came off a domestic flight from Beijing this month.

Asked why we were being pulled aside, they said we needed to know to wear masks because there had been a coronavirus outbreak in Xinjiang in July. We were wearing masks. They photographed our information pages and journalist visas. 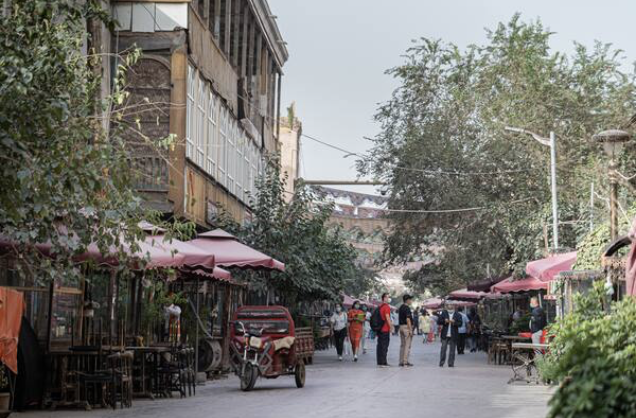 It was the start of four days of intense surveillance and nuisance checkpoints designed to obstruct our reporting and ensure that local people were too afraid to talk to us. There were the cars that tailed us everywhere - "Honda 25," "VW 35," we would chime as we spotted their license plates - and the Keystone Kops, men who would jump behind bushes or pretend to talk on their phones while obviously following us. 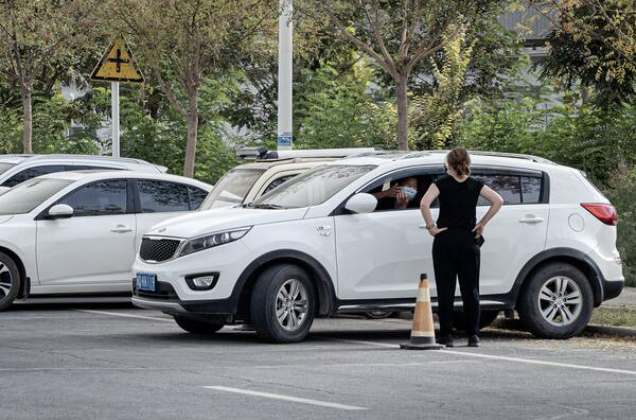 Then there were "Michael" and "Smith," the Public Security Bureau officers who repeatedly called us to the hotel lobby to insist that we follow local reporting regulations that, among other things, required that we get anyone's permission to interview them. Before long, we endured a farcical argument about whether we needed a public building to assent before we could photograph it.

This trip to Kashgar was the final reporting expedition I would make after 10 years in Asia. But it had me recalling not China, but a previous assignment: North Korea.

This evocative city, the home of Uighur culture that was once a stop on the Silk Road, has been turned into a Potemkin village, like Pyongyang, where it's impossible to discern where the real ends and the staged begins.

I first came to Kashgar in 2006 as a tourist, crossing the border from Kyrgyzstan. I remembered it as a magical place of Uighur people who looked Central Asian and spoke a Turkic language written in Arabic script, as a city of fresh figs and kebab smoke and a rowdy Sunday animal market, as a surprising and enchanting destination that just happened to be within China's borders.

Before returning to Kashgar this month, I dug out my photos from that trip. I found pictures of the renowned Id Kah Mosque, abuzz with activity. Photos of men with beards and women with headscarves, and young children smiling and posing for my camera. I wondered what had happened to these children, many of whom would now be in their early 20s.

Over the past four years, the Chinese government has detained more than 1 million Uighurs in reeducation camps designed to strip them of their culture, language and religion. They've had to shave their beards and uncover their hair. They've been made to pledge allegiance to the Chinese Communist Party. Children have been taken from their parents and put into orphanages.

Returning to Kashgar, I was struck by how, at first glance, it seemed relatively normal. In the Old City, families were out at the night market, eating piles of meat and bread. Kids could be heard laughing through open upstairs windows. There were even young men - prime targets for the detention campaign, which was ostensibly about deradicalization - on the streets again.

Walking around, I was overcome by the same sense of sadness mixed with rage that I felt when reporting in Pyongyang. I knew it was a kind of "Truman Show," but I couldn't see the edges of the set. I could see a blankness in people's eyes and feel a palpable heaviness in the air.

Had any of the people I saw in Kashgar this month been affected by the "reeducation" campaign? Almost certainly. But I couldn't ask them. Just as in Pyongyang, I didn't try to interview people on the street or in stores, as I would do anywhere else in the world.

Doing so could place those people in grave danger if it was discovered they had talked to a foreigner, and a foreign journalist no less. I would have loved to talk to someone who had been through the camps - but I was conscious of the risks I posed to people if I tried to discuss sensitive subjects. Or talk to them at all.

So I did something anathema to a journalist: I didn't strike up conversations on the street. I didn't ask questions in stores or parks or taxis. Except for arguments with security officials, I didn't dig. All I could do was watch and be watched.

When I arrived in China just over two years ago, I was finishing a book about Kim Jong Un and had been immersed in North Korea. I tried to stop myself from looking at China through the lens of its paranoid neighbor.

China is not North Korea, I told myself.

But Xi Jinping, who took full power in 2013, didn't make it easy for me to keep my North Korea thoughts at bay. There is still a level of latitude and commerce and vibrancy here that is unimaginable across the northeastern border, but some days China really feels like North Korea.

Like the day the People's Daily featured Xi's name in more than a dozen headlines on its front page. Or any of the days I've walked into a bookstore and seen nothing but the three volumes of Xi's "The Governance of China" on display. Or on Oct. 1 last year, when I watched as a huge portrait of Xi rolled through Beijing on top of a black car for National Day celebrations.

The Kims of North Korea may have learned from Soviet leader Joseph Stalin and Communist China founder Mao Zedong when they built their own personality cult, but Xi has stoked a level of personal adoration unseen in China for decades.

This propaganda works, at least in some instances. This year I've talked to young people in Changsha, Mao's hometown, who appear to genuinely admire the Communist Party. I've chatted with old people in the hutongs, or alleys, of Beijing who expressed relief that they had Xi, not President Donald Trump, in charge of their coronavirus response.

Their feelings appear to be authentic. But, increasingly, it is difficult to tell.

Not just in Xinjiang but across China, it has become extremely difficult to have conversations with ordinary folk. People are afraid to speak at all, critically or otherwise. Students and professors, supermarket workers and taxi drivers, parents and motorists have all waved me away this year.

Every now and then I will encounter a brave person who wants to talk, and I am always grateful to them for their honesty. But with that honesty comes a new layer of fear: Will my story result in this person being detained? Those who speak out face severe consequences, including many years in prison.

The invisible line between permissible and potentially treacherous has been shifting rapidly.

Chinese citizens are at most risk because there is no real judicial process and no recourse for them. But China, like North Korea, is increasingly taking foreign hostages and using journalists as pawns in its political and diplomatic disputes with the United States and its allies.

The extent of this trend hit home this month when I was planning a farewell in Beijing. Scrolling through my contacts list on the WeChat messaging app, I realized how many of them had been expelled - like my colleague Gerry Shih and many other American reporters. (The United States has forced dozens of Chinese journalists to leave in retribution.)

I felt a pang of sadness when I got to the "M" section. Canadians Michael Kovrig and Michael Spavor, both of whom I know through my work, have been held by China for more than 650 days, retribution for Canada's arrest of a Huawei executive. That's longer than North Korea held Otto Warmbier, the American college student.

More recently, it has emerged that Cheng Lei, an Australian journalist who worked for the Chinese state broadcaster's English channel, disseminating China's version of events to the world, was detained last month. She is the single mother of two young children.

As if there was any doubt over what Beijing, locked in a diplomatic clash with Australia, was up to, I woke up to news scarcely a week later that two Australian journalists had made a dramatic exit from China after being summoned for interrogation by state security officials, threatened with exit bans and potential detention.

It's clear that China now thinks the cost of having foreign correspondents - people who do pesky reporting on human rights abuses - outweighs the benefit of having people to write about what a great destination China is for investment.

So I left China this month with a heavy heart. I had already decided to pursue a new opportunity at home in New Zealand before the latest incidents with the Australian journalists. I don't see the situation getting freer or easier for the Chinese people any time soon, nor for the foreign journalists who try to show their audiences back home what it's like to be on the ground in China, for better or for worse.

Before I left, an old acquaintance told me about a joke going around China these days: "We used to think North Korea was our past - now we realize it's our future."