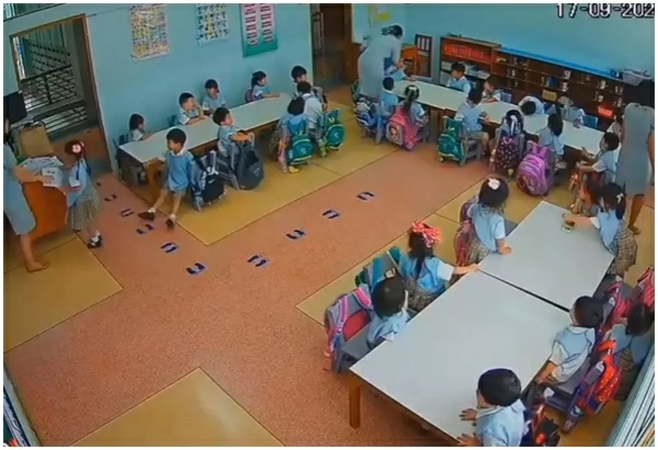 The private school held a press conference on Monday afternoon to clarify the incident where a female teacher was seen on CCTV assaulting kindergarteners.

The recordings showed teacher Onuma Ploadprong physically assaulting the children, banging their heads on their desks, pushing them to the ground and twisting their ears until they screamed in pain.

School principle Nittha Yukhong read an announcement at the conference, saying the school is deeply sorry for the incident and will take responsibility for the action of its staff.

“The school has immediately terminated the employment of Onuma as well as three other teachers who were involved in the incident,” she said. “We are willing to cooperate with officials pursuing legal action against Onuma and others. Furthermore, we will help provide psychiatric help to the traumatised students.”

Warunee Pheukthes, one of the school's teachers, said it would employ stricter measures in monitoring the teaching and activities of staff in the classroom, as well as using “stronger punishment” against staff that fail to adhere to the school’s standards.

“We will also invite parents to monitor the classrooms and take part in learning activities to strengthen parent-teacher cooperation, as well as select our staff based on qualification in kindergarten psychology and properly train them to use suitable disciplinary action and language toward children,” she promised.

Dr Warisnan Detprangprasong, representative of the school administrative panel, has vowed to appoint a new executive panel from its central office in two days to handle the problem as well as address the needs and concerns of parents.

“Please give us another chance to fix our mistakes,” he pleaded. “However, if parents want to take their children out of the school, we are happy to refund their tuition fees,” he said.

After the conference, some of the parents who attended the event still voiced dissatisfaction as the school failed to explain why some of its teachers did not possess professional licences but were instead granted a 2-year “extension” to improve their ability before applying for the licence.

“We found that Onuma had been granted an extension four times and still couldn’t obtain the license,” one of the parents said. “I’ll surely take my kid out of this school as the safety of my child is my top priority.”