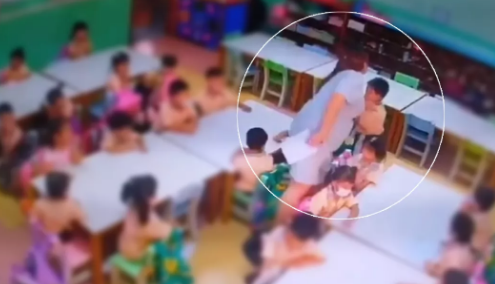 CCTV footage from a classroom in Sarasas Witaed Ratchaphruek School showing a teacher dragging a child down the floor by the collar went viral on Tuesday, sparking widespread anger.

Parents also marched to the school on Tuesday morning to demand an explanation.

Separately, on Monday a Filipino teacher working at the school reported himself to Nonthaburi immigration police claiming he did not assault any children even though a CCTV recording showed him pulling up a child’s arm.

The man said the child had snot on his face and he was trying to take him to the toilet to clean him up.

However, the teacher was unable to produce a teaching licence and was sent to Ratchaphruek Police Station to face charges.

Last week, Sarasas Witaed Ratchaphruek School came under the spotlight after CCTV recordings showed kindergarten teacher Onuma Ploadprong physically assaulting children by either banging their heads on their desks, pushing them to the ground or twisting their ears until they screamed in pain.

This subject is still a hot issue on social media, with some netizens sharing their personal experience of abuse in school, which proves that this problem needs to be addressed as soon as possible.