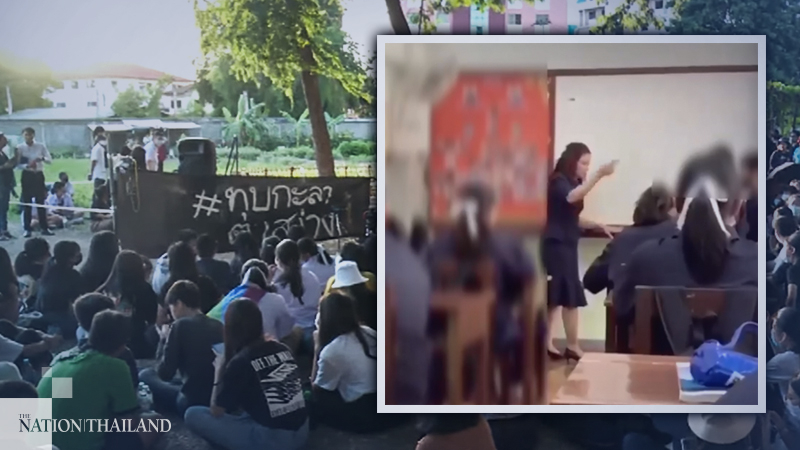 Activist Nuttaa Mahattana has vowed to sue a teacher who allegedly punished students by hitting their hands, which was not in line with the punishment allowed by the Education Ministry.

Nuttaa posted a video clip of the incident on her Facebook page on Wednesday (September 30).

She said the teacher in the video was said by students to be the same one who called them “very wicked” and “ungrateful”.

On Tuesday (September 29), Nuttaa shared a voice clip from Facebook page “Bodin Mai in Padetkarn” (Bodindecha Does Not Like the Dictator). In the clip, the teacher called students “very wicked” and “ungrateful” for joining an anti-government demonstration at the school on Friday.

The incident is alleged to have taken place at Bodindecha School in Bangkok. However, the hand punishment was not related to the anti-government demonstration on Friday (September 25).

The teacher allegedly said the students would achieve no success in life and were “too primitive” to be corrected by their parents.

Nuttha said that if no one recorded violence in schools, the alleged incidents of physical assault at Sarasas Witaed Ratchaphruek School would never have come to light. She was referring to video clips published last week of a teacher assaulting kindergarten pupils.

She concluded her post by saying society should learn from cases of abuse last week, that children have the right to live and study in safe spaces, protected from physical and mental violence.

School violence has become a hot issue on social media since last week. Several netizens have criticised the assaults and some have shared experiences of the abuse they themselves had endured.

The pro-democracy “Bad Student” group now aims to hold a protest at the Education Ministry on Friday (October 2).