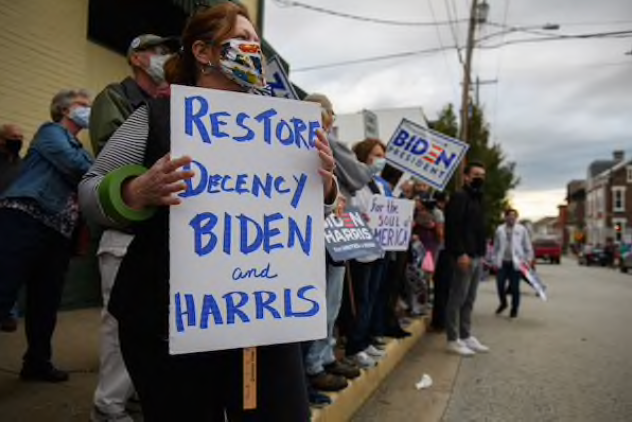 A crowd of supporters gathers outside the Amtrak station in Latrobe, Penn., for a glimpse of former vice president Joe Biden as he stops during a train tour while campaigning through parts of Ohio and Pennsylvania September 3, 2020 in Latrobe, Pennsylvania, on Wednesday. MUST CREDIT: Photo by Jeff Swensen for The Washington Post

Joe Biden stiff-armed the Green New Deal liberal climate plan at Tuesday's debate and offered a pointed reminder of his opposition to Medicare-for-all. He boasted of defeating Sen. Bernie Sanders "by a whole hell of a lot" and sidestepped calls from the left to expand the Supreme Court.

And on Wednesday, Biden said he hadn't recently spoken to Rep. Alexandria Ocasio-Cortez, D-N.Y., the leader of his party's young generation of ascendant liberals.

During his first debate against President Donald Trump, and again the next day, the Democratic nominee distanced himself from his party's left wing in some of his starkest terms yet, pushing back against Trump's efforts to brand him a puppet of "radical socialists."

"What the president keeps trying to do, he's trying to run against somebody other than me," Biden said Wednesday on a whistle-stop tour through Ohio and Pennsylvania. "I've said to the left, the right and the center exactly where I am on each of these issues."

Biden's debate comments, which reflected his commitment to winning over moderates in battleground states, prompted some concern among left-leaning activists, including at least one whose group reached out to his campaign to express his worries. But they were also followed by an embrace from some of the very liberal leaders Biden is keeping at arm's length - including Ocasio-Cortez, one of the chief sponsors of the Green New Deal.

"Our differences are exactly why I joined Biden's climate unity task force - so we could set aside our differences & figure out an aggressive climate plan to address the planetary crisis at our feet," she tweeted late Tuesday, referring to one of the working groups Biden set up with liberals after capturing the nomination. Biden said Wednesday that he while they had not spoken recently, "I appreciated her endorsement."

Her Green New Deal co-sponsor, Sen. Edward Markey, D-Mass., sounded similar notes. "I support the Green New Deal and I'm voting for Vice President Joe Biden," Markey said in a statement. "Donald Trump is wrong. The progressive left is with Joe Biden, and we will pass a Green New Deal."

The collective reaction on the left underlined the difficult balancing act facing the liberal movement since Biden won the nomination. Liberal activists are determined to push him on health care, climate change and economic policy, but they fear that too much resistance could hurt what they see as the overriding priority: defeating Trump. Many do not want to be blamed for derailing his campaign, as they were in 2016 for spurring significant defections from Hillary Clinton.

"Unfortunately, that's the position we're in right now," said Heather Stockwell, who served as a Sanders delegate to the Democratic National Convention and plans to vote for Biden. "We're going at this from a medical perspective: We have to stop the bleeding and hemorrhaging right now."

Trump renewed his efforts to stir divisions Wednesday, tweeting that in the debate, Biden "disrespected Bernie, effectively calling him a loser!" But liberals said that when Trump tries to stoke disagreement in their ranks, it hardens their desire to unite toward the goal of voting him out of office.

"I think no one takes Donald Trump seriously," said Rep. Mark Pocan, D-Wis., who supported Sanders and now backs Biden. "He's somewhere between showman and clown, depending on the day."

Biden's posture at the debate reflected his belief that the path to the White House runs largely though moderate suburbs where voters are sick of Trump but are not ready to embrace ideas such as government-run health care or defunding the police.

But that strategy is not without risk, and some on the left fear that turnout could be depressed among liberal voters. Sanders himself has expressed concerns about Biden's strategy.

At the same time, the senator from Vermont is campaigning virtually for Biden and said Wednesday that he soon plans to hit the road for Biden. "I'm doing everything I can," Sanders said on ABC's "The View." Sanders also defended Biden against Trump's attacks, reiterating that Biden does not agree with him on health care. "I wish he did, but he does not," he said.

Trump and his allies have relentlessly sought to cast Biden as beholden to Sanders's brand of democratic socialism, despite Biden actively rejecting that philosophy in the primary and doing so again in the debate.

"Joe, you agreed with Bernie Sanders's far left on the manifesto, we call it," Trump said in one heated exchange.

"And that gives you socialized medicine," interjected Trump.

"Look, hey, I'm not going to listen to him. The fact of the matter is I beat Bernie Sanders," Biden shot back.

"Not by much," Trump retorted.

"I beat him by a whole hell of a lot. I'm here standing facing you, old buddy," snapped Biden.

Biden underscored his commitment to expand the Affordable Care Act with an optional public insurance program, rather than replacing it with Medicare-for-all as Sanders and others want.

Biden repeatedly made the point that he won the nomination by defeating more leftist candidates. "My party is me," Biden said.

Health care is hardly the only major issue that has divided Democrats. While Democrats generally agree about the dire threats presented by climate change, for example, they hold different views of how aggressively to tackle it.

Evan Weber, political director of the Sunrise Movement, a group of youthful climate activists, called it a victory that the Green New Deal got any debate time at all. Still, he said his group reached out to Biden's campaign about the nominee's pointed distancing of himself from the plan, arguing that it could cost him votes. The Biden campaign listened to the concerns, he said, and Biden eased their worries when he told reporters that while he has his own plan, the Green New Deal was not bad.

"The vice president has an enthusiasm and mobilization gap with young people, particularly young people of color," Weber said. "This was an opportunity to reach out to them and get them excited about his campaign. And I'm not sure that his performance on this question did that. So we're hopeful that the campaign sees that as a mistake and misstep."

Earlier this year, there was hope for more cooperation. After Sanders dropped out, he quickly backed Biden and their teams formed unity task forces that issued recommendations on climate change, immigration and health care. Biden also moved closer to Sanders on combating student debt.

But since then there has been less harmony. "I beat the socialist. That's how I got elected," Biden said in an interview with Fox 11 News in Wisconsin last week.

But liberal fears about a second Trump term have prevented the fractures of 2016. Actress Susan Sarandon, a Sanders surrogate who supported the Green Party ticket in 2016, has endorsed Biden as "a vote against fascism." Most left-wing groups that backed Sanders or Sen. Elizabeth Warren, D-Mass., in the primary have either endorsed Biden or shifted their focus to down-ballot races, not to protests of the nominee.

The dampened enthusiasm for a "Dem Exit," as the Green Party supporters called for in 2016, was on display at a leftist-oriented demonstration near the debate site Tuesday.

Attacks on Trump - including a chant that combined his name with a four-letter word - got far more applause than attacks on the two-party system. Even as Green Party presidential nominee Howie Hawkins roamed near the back of the crowd, some in the crowd wore Biden-Harris masks.

"We may not have the best candidate right now, but God knows, we have the lesser evil," said Asia Jones, the rally's emcee. "I need us to vote. I need Trump and [Vice President] Pence to be out of the White House."