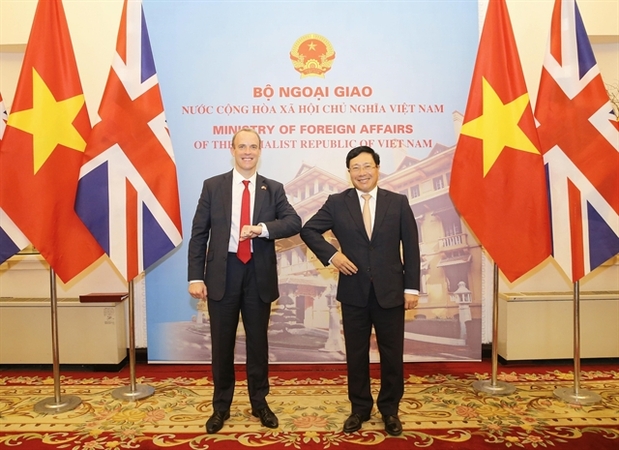 HÀ NỘI — Việt Nam and the UK are looking forward to strengthening the bilateral strategic partnership and build a new vision for the relationship in the next 10 years, according to their top diplomats.

Deputy PM Minh welcomed and spoke highly of the UK diplomat’s visit to Việt Nam, saying it made contributions to strengthening the 47-year relations between the two countries.

The host thanked the British government for its support of the signing of the free trade agreement (FTA) between Việt Nam and the European Union, the EU - Việt Nam Free Trade Agreement (EVFTA).

Foreign Minister Raab thanked Việt Nam for agreeing to apply the EVFTA with the UK during the Brexit transition period, reaffirming the commitment to conclude negotiations to sign and implement a Việt Nam-UK FTA.

The two sides agreed to resume delegation exchanges at all levels, especially at a high level, if the conditions are favourable.

They said that economic relations between the two countries have grown impressively in recent times.

Two-way trade turnover in 2019 reached US$6.6 billion, while foreign direct investment (FDI) of the UK sent to Việt Nam was $3.7 billion last year.

The two sides agreed to encourage and facilitate businesses and investors from both countries to connect, especially in areas in which the UK has strengths and Việt Nam is in need like high technology and information, oil and gas, finance, banking, insurance, renewable energy development and smart cities.

Deputy PM Minh spoke highly of Việt Nam-UK co-operation at multilateral forums, especially co-ordination and exchange between the two countries when Việt Nam has a dual responsibility of being ASEAN 2020 Chair and a non-permanent member of the United Nations Security Council in the 2020-21 tenure.

The two sides agreed to work closely to prepare for the 26th United Nations Conference on Climate Change Conference (COP26), which the UK will host next year.

They also highlighted the importance of maintaining peace, stability, security, ensuring safety and freedom of navigation and overflight, resolving disputes by peaceful means, not using force or threats, respect for international law and the 1982 United Nations Convention on the Law of the Sea (UNCLOS 1982).

Foreign Secretary Dominic Raab expressed his pleasure at being the first European politician to visit Việt Nam since the COVID-19 pandemic began.

He affirmed that the British government wanted to promote an effective strategic partnership with Việt Nam, and highly appreciates Việt Nam's increasingly important role and position in the Asia-Pacific and Southeast Asia regions.

After the meeting, Raab tweeted: “Việt Nam’s economy is one of Asia’s most dynamic, and has shown remarkable resilience throughout the COVID19 crisis. From renewable energy to financial services, there is huge potential for trade and investment between Vietnamese and UK businesses.”

“We have secured Việt Nam’s public support for the UK joining the Comprehensive and Progressive Trans-Pacific Partnership. This is a significant step in taking the UK-Việt Nam economic relationship to the next level, and demonstrating the UK’s commitment and value to the region,” he wrote.

During the meeting with the Vietnamese deputy PM, the UK official emphasised the UK’s commitment to work with Việt Nam, including on maritime security, Myanmar and multilateralism through ASEAN and the UN Security Council.