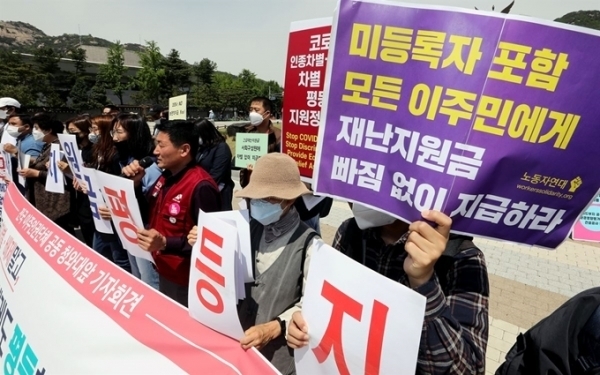 Activists demand that the government pay emergency relief funds to foreigners living here as well, at a press conference in Seoul in May. (Yonhap)

It is the time of the year when migrant workers in South Korea feel the most homesick, as locals celebrate the Chuseok fall harvest holiday with their families.

As the coronavirus pandemic has brought the world to a standstill, many of them are stuck in this foreign country with neither an income nor a way out, missing their homes more than ever.

“I want to go back to my country. All my Nepalese friends say so too,” said Megh Thapa, 44, a Nepalese national. “But there are no flights. How can we stay here longer (without a job)? What can we do?”

After working at a manufacturing factory in Paju, Gyeonggi Province, for nearly five years, he was planning a return home before the expiration of his visa in April this year. He sent most of his savings to his family in Nepal. He was supposed to fly home March 27, and then the global pandemic changed everything.

“I was ready to go back. I waited and waited, but there were no flights,” he said.

He is among an estimated 8,800 migrant workers who have found themselves unable to return home after the end of their sojourns because of flight suspensions.

As the pandemic curtailed international flights, the government granted a 50-day extention in April to Thapa and other migrant workers. During the extended stay, however, he was not allowed to work.

Thapa registered with the Nepalese Embassy for a government-organized repatriation, but there is little hope that he can go home soon. There are at least 1,000 Nepalese people waiting in line before him, he said.

While foreign embassies in Seoul are scrambling to arrange charter flights to repatriate their citizens, priority is being given to urgent cases due to the limited number of seats. From April to August, only some 3,360 foreign nationals have been airlifted from Korea on 62 occasions, according to the Justice Ministry.

With no jobs, no income and no permits to work here legally, migrant workers are stranded with little support from Korean society, an activist said.

“Without a job, many of them had to move out of their dormitories and stayed at friends’ homes while waiting to return to their countries for longer than they expected,” Ko Seong-hyun, director at the Gyeongnam Migrants Labor Welfare Center, said.

At the beginning of the COVID-19 outbreak, only those who had subscribed to the national health insurance plan were eligible to buy masks, leaving out about half of the foreign population here. Foreigners were also excluded from the government’s cash relief programs unless they were married to Koreans.

Struggling to stay afloat, some of the stranded foreigners are turning to illicit work.

Deportation is no alternative for those hoping to go back home, as they would face prolonged detention in overcrowded centers before being sent back.

“We have seen a rise in the number of foreigners being held in detention facilities since April, when each country began to close their borders and restrict air travel with the coronavirus outbreak declared a pandemic,” the Justice Ministry said in an email response to The Korea Herald.

In January, when the global coronavirus outbreak reached Korea, some 447 foreign nationals were being held at three detention facilities across the country. The figure rose to 722 in April and had nearly tripled to 1,219 as of August, the ministry data showed.

“Many countries reduced inbound flight operations and are demanding (of their own citizens being held here) additional measures such as being tested for COVID-19 or agreeing to be quarantined at separate facilities (upon arrival in their home countries), which is extending their stay at the detention centers and making it difficult for us to send them back to their countries,” the ministry added.

The Justice Ministry said it had refrained from conducting crackdowns on unregistered migrants amid concerns that such crackdowns could overwhelm the already overcrowded detention centers.

However, the number of foreign detainees is likely to grow as those caught by the police or getting out of prison continue to be transferred to the detention centers, raising fears that cramped detention centers could turn into hotbeds of COVID-19.

Activists say that extending work permits for migrant workers unable to return home might be a solution. This could free up space at detention centers, tackle labor shortages in the country and ensure public safety amid the prolonged pandemic, they say.

While migrant workers are desperately demanding the right to work until they are able to return to their countries, Korean employers suffering from labor shortages are calling on the government to bring in more foreign workers.

According to a survey of 1,958 small and medium-sized businesses conducted by the Korea Federation of SMEs from Aug. 28-31, 64.1 percent of the respondents said they had trouble on their production lines because of the shortage of migrant workers.

This year Korea was set to accept 56,000 foreigners under the Employment Permit System, under which the country accepts workers from 16 Asian countries to fill low-skilled jobs. But only 3,137 of them had made it to Korea as of Aug. 31 due to the pandemic. Currently, there are about 248,000 migrant workers here under the EPS.

To meet labor shortages in the agricultural and fishing sectors, the government hired seasonal workers among those whose work permits had expired between April 14 and Aug. 31. But only some 380 migrants won the chance to work for up to three months in those sectors.

“There are many areas urgently requiring a lot of labor -- such as farms or manufacturing factories producing masks. If the government cannot take in new foreign workers under the EPS like in the past, they should consider utilizing those who are already here,” Kim Dae-kwon, director of Friends of Asia, said.