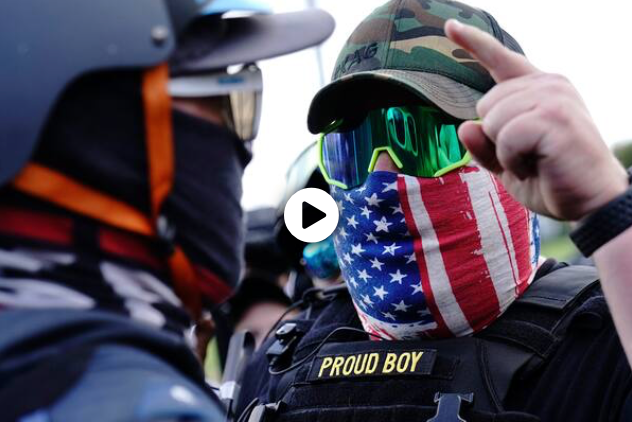 PORTLAND, Ore. - When Proud Boys chairman Enrique Tarrio woke up Wednesday, four news vans were parked in front of his home. The chairman of the far-right fraternity with a violent reputation was sleepy but not surprised; his phone had been ringing nonstop since President Donald Trump told his members to "stand back and stand by" during the first presidential debate the night before.

PORTLAND, Ore. - When Proud Boys chairman Enrique Tarrio woke up Wednesday, four news vans were parked in front of his home. The chairman of the far-right fraternity with a violent reputation was sleepy but not surprised; his phone had been ringing nonstop since President Donald Trump told his members to "stand back and stand by" during the first presidential debate the night before.

Trump's words were a galvanizing moment for the far right and specifically for the Proud Boys, a male-only group with a reputation for bashing leftist protesters during street brawls. The sitting Republican president had given an organization that had operated on the political fringes for years a shove toward the mainstream on national television.

When Trump was asked whether he would be willing to denounce white supremacists and the Proud Boys were offered as a specific example, he didn't, saying: "Proud Boys - stand back and stand by. But I'll tell you what, I'll tell you what, somebody's got to do something about antifa and the left."

By Wednesday morning, the hashtag #WhiteSupremacy was trending on Twitter in the United States, among accounts on both the left and the right. Trump's comments were enshrined in memes, including one depicting Trump in one of the Proud Boys' signature Fred Perry polo shirts. Another meme showed Trump's "stand by" quote alongside an image of bearded men carrying American flags and appearing to prepare for a fight. A third incorporated "stand back and stand by" into the group's logo.

Many social media platforms have kicked the Proud Boys off their sites, but laudatory images pinballed around the conservative social media site Parler as well as channels on the encrypted chat app Telegram, according to researchers.

One prominent Proud Boys supporter on Parler said Trump appeared to give permission for attacks on protesters, adding that "this makes me so happy." Other supporters saw a retail opportunity, pushing $30 T-shirts and $40 hoodies bearing the group's logo and the words "Proud Boys Standing By."

For many members, the president's remark was the validation they craved, quickly turning into a fundraising and recruitment drive while, experts worried, legitimizing the group's violent tactics.

"Obviously, it was the topic of the debate for Portland," Tarrio told The Washington Post. "There's no name more synonymous with standing against domestic terrorism than the Proud Boys. It also gives me joy that America sees that we are the ones that are willing to stand back and do something about domestic terrorism in Portland."

Tarrio, who also heads an unofficial Latinos for Trump group, said the Proud Boys plan to canvass for Trump in the remaining days before the election. Some voters will find members of an organization deemed a hate group standing on their doorsteps, urging them to vote.

Created in 2016 by a former Vice magazine co-founder, the group has become a fixture at political demonstrations around the country, often showing up wielding batons, bear mace and guns, ready to do battle with their perceived enemies in the far-left antifa movement. Leaders say they disavow racism, though the Proud Boys have ties to white supremacists and sometimes use nationalist rhetoric common among hate groups.

But members' skill at wielding irreverence, mocking political correctness and hewing close to views espoused by mainstream conservatives has allowed the Proud Boys to camouflage their most dangerous ideologies and flourish where other groups have withered.

Experts in extremism agreed that Trump's comments amounted to an unprecedented shout-out to a group that, while small, has a demonstrated history of fomenting violence in America.

"You're essentially telling a paramilitary force to 'stand by,' " said Heidi Beirich, an expert on far-right politics who co-founded the Global Project Against Hate and Extremism. "I think at this point, the biggest thing to worry about is Election Day. . . . It'd be pretty scary to try and go vote and have hundreds of people screaming at you about these ideas."

After the Proud Boys moment had morphed into a movement Wednesday, Trump tried to distance himself from the group. The president said he didn't know who the Proud Boys were but noted that he wanted to speak about such groups generally.

He emphasized that the "radical liberal Democrat movement" was weak, forcing private citizens to take up the slack for law enforcement.

Trump's campaign also sought to clarify his position: "They have no role in our campaign and we do not sanction this," spokesman Tim Murtaugh said in an email to The Post.

While Tarrio said he expects the president's mention will strengthen the group and swell its numbers, he lamented that the national conversation linked his group with white supremacy, which he said is an inaccurate umbrella term he feels hurts their cause.

The Proud Boys describe themselves as a "Western chauvinist" men's club that believes in ending welfare, closing borders and adhering to traditional gender roles. According to the Southern Poverty Law Center, the group maintains affiliations with extremists and is known for misogynistic and anti-Muslim rhetoric. The group's founder, Gavin McInnes, told NBC News in 2017, "I think it's fair to call me Islamophobic."

McInnes, who co-founded Vice in 1994, launched the Proud Boys in fall 2016 in an essay for Taki's Magazine, a far-right outlet where white nationalist Richard Spencer previously served as an editor. The group was named after the song "Proud of Your Boy," an outtake from the soundtrack to the Disney musical "Aladdin." McInnes reportedly hated the song because he believed it disparaged men.

The basic tenet of the group, McInnes wrote at the time, is "Western chauvinists who refuse to apologize for creating the modern world." He continued: "Like Archie Bunker, they long for the days when 'girls were girls and men were men.' This wasn't controversial even twenty years ago, but being proud of Western culture today is like being a crippled, black, lesbian communist in 1953."

McInnes has pushed back against organizations that have deemed them a hate group, suing the SPLC over the classification. But he also has distanced himself from the Proud Boys because of their violent reputation.

The Proud Boys' numbers have grown, though it is difficult to know precisely how many active Proud Boys there are. Beirich, of the Global Project Against Hate and Extremism, estimated membership is in the hundreds and said the group has an oversized presence in politically fractious situations, particularly in recent protests in Portland and Seattle. They also have worked security for Trump political adviser Roger Stone, who was convicted of lying to federal investigators and other felonies.

Beirich said they have welcomed known white supremacists into their ranks.

Some members attended the 2017 Unite the Right rally in Charlottesville, Va., where white supremacists and counterprotesters fought in the streets and a self-professed neo-Nazi plowed his car into a crowd of demonstrators, killing one.

Last year, two members of the group were sentenced to four years in prison for their roles in a 2018 brawl outside a New York Republican club event. They were found guilty of gang assault for attacking antifa protesters. Because of this and other skirmishes, some law enforcement officials view the Proud Boys as akin to a street gang looking to fight with left-wing protesters.

Tarrio and other leaders push back against claims that the Proud Boys are street hooligans targeting antifa. Even though government leaders in Oregon declared a state of emergency, a Proud Boys rally here in Portland on Saturday was not violent. Proud Boys still showed up wearing bulletproof vests and carrying an assortment of weapons, including military-style rifles, paintball guns and bear mace.

Other recent events paint a more aggressive picture. Several people who have attended protests in Portland say they have been assaulted by members of the Proud Boys, including a man who was struck near the eye by a paintball.

On Aug. 22, during a Proud Boys march in Portland, members of the organization and other right-leaning supporters clashed with antifa supporters and other counterprotesters in front of police headquarters. Video showed combatants throwing punches and rocks and shooting bear mace at one another.

And a review of Proud Boys networks on the conservative social networking site Parler shows that it at times glorifies violence against protesters. Members swap videos of fights with antifa, the clips often set to rock music.

Although the Proud Boys don't have a Twitter presence, references to the group have surged spectacularly on the site. Normally, they receive a few thousand mentions a day. Since the debate, they have received more than a million, according to Clemson University social media researcher Darren Linvill.

"They've been given a gift," he said.