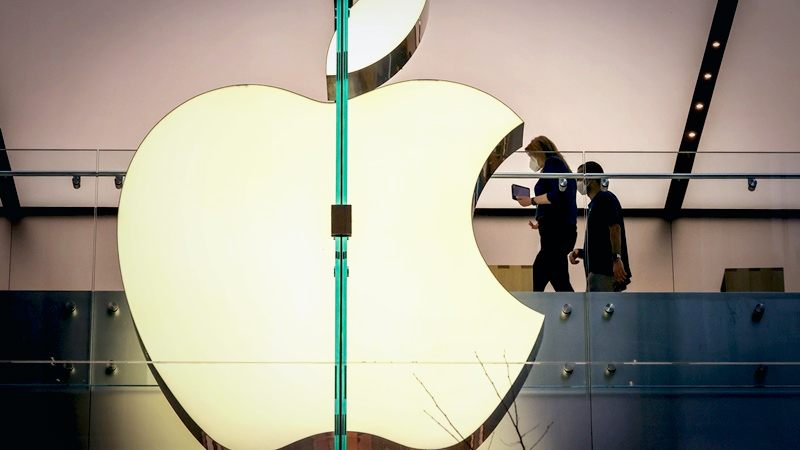 Employees wear protective masks as they walk past signage displayed in the window of the Apple Inc. flagship store in Sydney on Sept. 18, 2020. MUST CREDIT: Bloomberg photo by David Gray.

Apple is set to embrace 5G as one of its most significant additions to this year's iPhones, but the technology is still not ready for the masses in the U.S.

That's because the country's three largest wireless carriers, Verizon Communications Inc., AT&T Inc. and T-Mobile US Inc., have yet to roll out 5G in a way that provides consistently higher data speeds or widespread coverage. If these companies do not dramatically upgrade their networks soon, many consumers buying the latest iPhones could find this year's premier feature underwhelming.

The addition of 5G will be a key talking point at Tuesday's iPhone event, underscored by Apple's tagline: "Hi, Speed." The new wireless technology lets phones download data from a cellular connection many times faster than 4G LTE, the current standard -- but 5G coverage remains scarce in many advanced markets.

Apple has asked suppliers to build as many as 80 million of the new iPhones this year, Bloomberg News has reported. Investors and analysts are bullish about the devices, partly because 5G networks are more built out in China. This year's crop of new iPhones also marks the first major redesign in three years, which could spur more upgrades.

"The increased speed capability of the new 5G iPhones should create a catalyst for a major upgrade cycle," said Dan Morgan, a senior portfolio manager at Synovus Trust Company. "I would expect sales in China to be robust." An Apple spokeswoman declined to comment.

In the first quarter this year, phone makers led by Samsung shipped 3.4 million 5G phones in the U.S., a fraction of the overall market, Strategy Analytics data show. In a few other countries, 5G has performed far better. A third of phone sales in China during the second quarter were 5G handsets, according to Counterpoint Research.

Tests by IHS Markit's RootMetrics across 125 U.S. areas in the first half of 2020 showed that 5G speeds on AT&T, T-Mobile and Sprint are only slightly faster than 4G LTE. AT&T and T-Mobile, which is buying Sprint, have both claimed their 5G networks are available "nationwide," a metric that means they can reach 200 million people, but coverage is still often sporadic and data speeds are not consistently faster.

Verizon has a much quicker 5G network that uses ultra wideband, or millimeter wave technology, but that is only live in select parts of 36 cities. The technology also sometimes suffers from rapid drops in signal.

The launch of 5G iPhones is likely to be used as the staging post for a fresh wave of expansions and announcements from network operators. After Apple rolled out its first 4G LTE iPhone in 2012, major U.S. carriers built out their networks. Verizon is expected to announce a form of nationwide 5G availability as early as next week, according to people familiar with the matter. T-Mobile has also boasted of speed increases recently.

Many iPhone users hold on to their devices for three years or more, so the new the devices should be ready for a future where 5G works consistently.

Tuesday's event will usher in the widest array of new iPhones that Apple has announced at one time. There will be four new models with faster A14 processors, new designs with squared off versus rounded sides and upgraded cameras, according to people familiar with the plans.

The new models are being announced about a month later than usual due to supply constraints and testing complications created by the covid-19 pandemic. While all four models will be announced Tuesday, at least the largest 6.7-inch Pro model is expected to not be released until later, according to one person.

Over the last several weeks, Apple has chartered flights to get dozens of employees from the U.S. to China to oversee the final assembly process. The company has also used video conferencing to have engineers in California review and approve specific parts.

All of the new phones will have flat sides to make the design more consistent with the latest iPads. The lower-end models will continue to use aluminum edges, while the higher-end phones will still use stainless steel. The pricier Pro models will also have a Lidar scanner on the back for augmented reality applications and will have three cameras instead of two. There will also be a new dark blue color option.

Also for the first time, all four phones will use OLED screens. That's a shift from last year when the entry-level iPhone 11 used a cheaper LCD screen. In a move that will help offset the higher costs of new screens and 5G chipsets, while also benefiting the environment, Apple will stop including a wall charger and earphones in the box with the new iPhones. A charging cable will still be included.

The new iPhone line will be Apple's most important product launch of the year and follows the release of new Apple Watches earlier this month. The company is also preparing to announce its first Apple-branded over-ear headphones and a smaller version of the HomePod speaker as early as this month. The first Mac laptop with Apple's own processor, among other products, will emerge at another launch in November.

The Apple headphones have been in development for nearly three years, but have faced development challenges along the way. An early version had large touch panels on both sides to control playback, but those sensors were reduced in size. The noise-canceling headphones have been designed to be reversible so that both ear cups can fit either ear and for the pads to be replaceable. Apple recently stopped selling rival headphones and speakers.

The smaller HomePod will be Apple's second smart speaker. The original model, released in 2018, failed to grab major market share. Apple is banking on a lower price point, a smaller form factor and new software that supports third-party music services to make up ground on leaders Amazon.com Inc. and Google. Apple is also working on tags to help users locate physical items with an iPhone app.