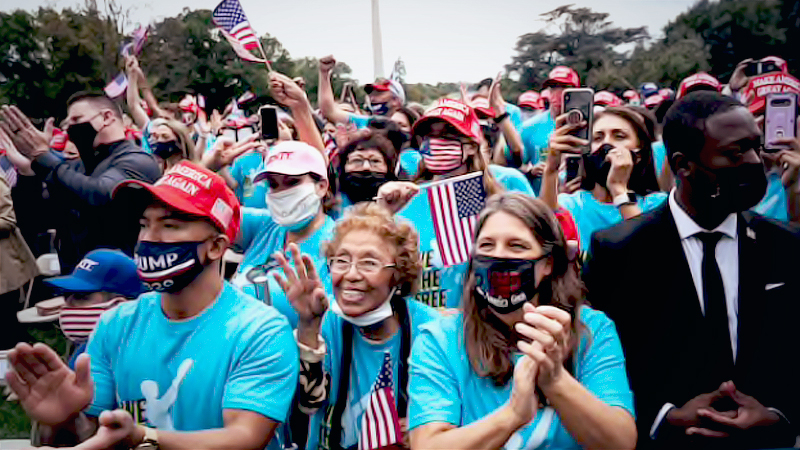 Supporters cheer as President Trump speaks during an event at the White House on Saturday. MUST CREDIT: Washington Post photo by Jabin Botsford

Back in July - after U.S. Postal Service delays drew attention and as President Donald Trump ratcheted up his rhetoric against absentee ballots - the U.S. Vote Foundation, a nonprofit voter assistance organization, fielded an influx of questions from Americans abroad.

Many ballots for the November election had not yet been sent out, but Susan Dzieduszycka-Suinat, the foundation's chief executive, said they had received more requests than average at that point over voters' concerns that they would not receive or be able to send in their mail-in ballots on time.

Each election sees a flurry of interest in the voting process, but "this year is markedly different," she said.

Some questions and concerns are the same of stateside voters as the coronavirus pandemic forces what is expected to be the largest voting-by-mail event in U.S. history. But those hoping to cast ballots overseas face unique complications and challenges.

More than 130,000 Americans abroad voted by mail or online in the 2018 midterm elections, about 4.7% of eligible U.S. citizens with non-U.S. addresses, according to the Federal Voting Assistance Program. While that figure is only a small portion of the 110 million Americans who voted in 2018, absentee ballots from overseas voters in some elections have helped tip the scale in previous elections, such as in the Florida recount during the 2000 presidential election, when whether to accept or disqualify some ballots became the subject of intense scrutiny.

Before 1975, no law specifically guaranteed U.S. citizens abroad without a U.S. residence the right to vote. The current framework is governed by the 1986 Uniformed and Overseas Citizens Absentee Voting Act, which was expanded in 2009 with the passage of Move, the Military and Overseas Voter Empowerment Act.

Under federal law, any U.S. citizen residing abroad has the right to vote by absentee ballot for the president, vice president and congressional representative. To do so, they must first be registered to vote in their last state of residence, even if they may no longer have ties to an address there.

The law grants oversees voters the right to request a ballot and register to vote online. To streamline the process, the same form can be used for both registering and requesting an absentee ballot. Voters abroad are expected to receive their absentee ballot at least 45 days before the election if they register on time.

If the ballot does not arrive as expected, or if the voter is worried it will not, they can submit a federal write-in absentee ballot. If a ballot arrives after the voter submitted a write-in, they can still submit the official ballot, but must inform an election official of the change.

Americans in the Armed Forces can return their ballot free via expedited mail.

U.S. citizens abroad cannot simply go to a U.S. embassy or consulate to cast their vote. Elections in the United States are run by the state governments, so specific voting requirements vary widely.

Each state has its own cutoff date for voter registration, though no deadline is more than 30 days before the election, according to Scott Wiedmann of FVAP. All voters can receive an absentee ballot online - but some 20 states require it to be returned by mail, and the remainder allow for return via mail, email or, in some cases, fax.

About half of all states require that election officials receive absentee ballots by the end of Election Day, which this year is Nov. 3. The other half will accept ballots from abroad postmarked by Election Day and received within a set period after polls closed, according to Wiedmann. Some states with voter identification laws require a form of identification be sent along with absentee ballots. For U.S. citizens who were born abroad and have never lived in the United States, not all states permit them to register without first traveling to the United States to establish residence.

Some language in the overseas forms can be confusing for voters. Instructions, for example, do not specify that voters can use any kind of paper while printing their ballot and any kind of envelope to send it in. "Every overseas voter can print on the paper they have," Dzieduszycka-Suinat said. One form asks when the voter intends to return to the United States, which is more of a legal formality.

Once signed and sealed, ballots can also be returned via FedEx, DHL or any such currier service. "For overseas voters nowhere does it prescribe that ballots must be returned by U.S. Postal Service only," Dzieduszycka-Suinat said.

The coronavirus pandemic, coupled with the Postal Service challenges from the pandemic and other factors, has made receiving and sending ballots more complicated for some overseas voters. The rhetoric around the election, such as Trump's railing against mail-in ballots and refusal to commit to a peaceful transfer of power, has also heightened attention on absentee voters and what role they could play in a contested election.

Coronavirus-related curfews and restrictions on movement, for example, could make it harder for some potential voters to access a printer or post office. Due to the novel coronavirus, the Postal Service has suspended mail service to around 30 countries. Mail delays on the U.S. side could further impede a ballot's timely arrival.

Amid the anxiety, FedEx announced last month a special discount on next-day delivery for U.S. voters in 10 European countries, allowing ballots to ship for around $30.

Before the pandemic, voters abroad had designated periods during which to drop off ballots at U.S. consulates and embassies, which would send them on to the right states. Many diplomatic buildings around the world, however, remain temporarily closed due to the coronavirus, while some that are open have told voters they cannot accept ballots or ensure their timely arrival, BuzzFeed News reported.

"In this situation this year, with the Postal Service being so questionable, it's upended a lot of the things that we've done in the past," said Dzieduszycka-Suinat.

Despite the challenges, she urged overseas voters not to panic and to contact their local election boards, the U.S. Vote Foundation or the Federal Voting Assistance Program with questions or to access resources. Federal write-in absentee ballots always remain an option if regular absentee ballots do not arrive in time, Dzieduszycka-Suinat said. She urged voters to pay attention to details when filling out the form, such as not forgetting to sign the absentee ballot.