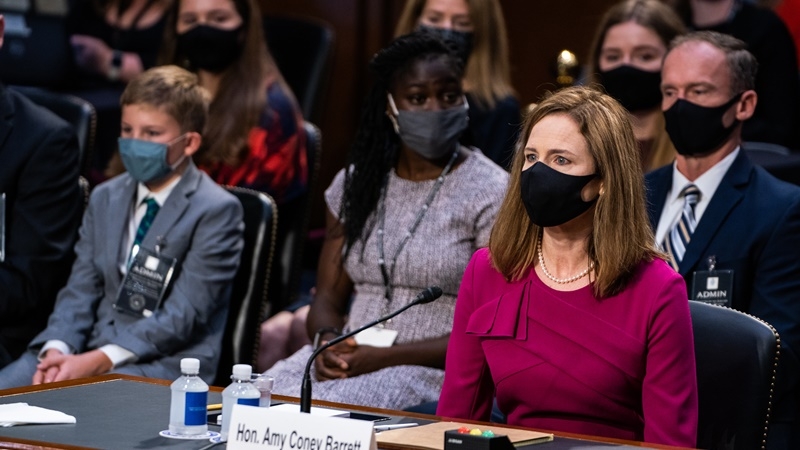 WASHINGTON - Supreme Court nominee Amy Coney Barrett made her formal introduction before the Senate Judiciary Committee on Monday, pledging to be a justice who will apply the law "as written" and paying tribute to justices across the ideological spectrum who came before her: Justices Antonin Scalia, Sandra Day O'Connor and Ginsburg.

Barrett hewed close to her prepared remarks, which were made public on Sunday, in which she stressed her philosophy that courts were not a place where every right or wrong in society should be corrected.

"The policy decisions and value judgments of government must be made by the political branches elected by and accountable to the people," Barrett told the Senate Judiciary Committee. "The public should not expect courts to do so, and courts should not try."

She noted that Scalia - for whom she clerked - believed that a judge must apply the law as written and not as he or she wished it were.

"It was the content of Justice Scalia's reasoning that shaped me," Barrett said.

As for her female predecessors, Barrett praised O'Connor - the first woman to sit on the Supreme Court - as a "model of grace and dignity" and paid tribute to Ginsburg's storied career.

"I have been nominated to fill Justice Ginsburg's seat, but no one will ever take her place," Barrett said. "I will be forever grateful for the path she marked and the life she led."

She told the committee that a Supreme Court seat was "not a position I had sought out" and that she "thought carefully" before accepting the nomination. Senate documents show she accepted it Sept. 21, three days after Ginsburg's death.

Barrett also nodded to her family, sitting behind her except for her youngest child, Benjamin, who is staying with friends. Earlier Monday, Benjamin was calling out the names of his siblings as he saw them on television, Barrett said.

"The confirmation process - and the work of serving on the court if I am confirmed - requires sacrifices, particularly from my family," Barrett said. "I chose to accept the nomination because I believe deeply in the rule of law and the place of the Supreme Court in our nation."

Sen. Lindsey Graham, R-S.C., opened Barrett's confirmation hearing Monday by acknowledging that the proceedings will surely be contentious but urging senators to hold a respectful process, saying: "Let's remember, the world is watching."

Graham, the committee's chairman, also paid tribute to the woman whose seat Barrett would fill, the late Justice Ruth Bader Ginsburg, and noted that she was confirmed nearly unanimously in 1993 despite a legal resume of fighting for liberal causes.

"There was a time in this country where someone like Ruth Bader Ginsburg was seen by almost everybody as qualified for the position … understanding that she would have a different philosophy than many of the Republicans who voted for her," Graham said.

He also defended working on a Supreme Court confirmation so close to an election, acknowledging that it has never been done beyond July of an election year but that a president is elected for four years.

"This is a vacancy that has occurred through the tragic loss of a great woman, and we're going to fill that vacancy with another great woman," Graham said.

Sen. Dianne Feinstein, the ranking Democrat on the Senate Judiciary Committee, wasted no time painting the GOP's move to quickly confirm Barrett as an attempt to upend the Affordable Care Act and its protections for people with preexisting medical conditions.

Democrats over the past several days have agreed to hammer the health-care issue over and over during the Barrett hearings, convinced they could turn voters away from the GOP and Trump simultaneously.

"Health-care coverage for millions of Americans is at stake in this nomination," the Democrat from California said, noting that the Supreme Court is set to hear arguments on the constitutionality of the Affordable Care Act in mid-November.

Democrats have insisted that Barrett recuse herself from the case, arguing that she cannot rule impartially on a law that the president who nominated her has said he wants axed.

Trump, Feinstein pointed out, said eliminating the Affordable Care Act would be "a big win for the USA." And she noted that Barrett previously criticized Chief Justice John Roberts Jr. for how he ruled to uphold the health-care law, saying he "pushed the [ACA] beyond its plausible meaning to save the statute."

"I hope you will clarify that in this hearing," Feinstein said.

Sen. Kamala Harris of California, the Democratic vice-presidential nominee, echoed the health-care message of other Senate Democrats and warned that confirming Barrett to the Supreme Court would precipitate the demise of the Affordable Care Act.

Like the other Democrats who spoke before her, Harris in her opening remarks told the story of a constituent who has benefited from the protections of the 2010 health-care law: an 11-year-old girl named Myka from Southern California, who has a congenital heart defect and has to see multiple specialists during the year.

Harris argued that because Republicans have failed legislatively to repeal the increasingly popular Affordable Care Act, "now they are trying to bypass the will of the voters and have the Supreme Court do their dirty work."

"They are trying to get a justice onto the court in time to ensure they can strip away the protections in the Affordable Care Act," Harris said in her opening remarks. "And if they succeed, it will result in millions of people losing access to health care at the worst possible time in the middle of a pandemic."

In her prepared remarks, Harris also cited the late Justice Ruth Bader Ginsburg, praising her as someone who "devoted her life to fight for equal justice." As she hailed Ginsburg and her legacy, the children's book "I Dissent" about the late justice was displayed behind her.

"By replacing Justice Ruth Bader Ginsburg with someone who will undo her legacy, President Trump is attempting to roll back Americans' rights for decades to come," Harris said.

Harris was appearing remotely from her office in the Hart Senate Office Building, claiming that Republicans did not take sufficient public-health safeguards to hold such in-person proceedings during a pandemic.

Three years before she sat in a Senate hearing room as a Supreme Court nominee, Barrett disparaged the legal reasoning of the nation's chief justice when he wrote the majority opinion in a major case that upheld the Affordable Care Act.

In an essay published in a journal of Notre Dame Law School, where Barrett was a professor, Barrett contended that judges should respect the text of statutes and that Chief Justice John Roberts pushed the health-care law "beyond its plausible meaning to save the statute."

In the 2012 case, the first time the high court considered the constitutionality of the 2010 law that reshaped much of the U.S. health-care system, ACA opponents argued that Congress had overstepped its bounds of the Commerce Clause when it included a tax penalty for people who disregarded the law's requirement that most Americans carry health insurance. Roberts wrote that this part of the law fell within Congress's legitimate taxing authority.

The Supreme Court upheld the ACA on different grounds in 2015. It is scheduled to hear oral arguments in a third case challenging the law on Nov. 10, a week after the November elections.

Democrats believe their most effective political play is to frame the battle over Barrett as a fight over health care, knowing they have little power to halt her confirmation before Nov. 3.

"We do not have some secret, clever procedural way to stop this sham. Let's be honest," Sen. Amy Klobuchar, D-Minn., said at a post-hearing news conference with other Democratic senators. "And as good as we are, it's probably not going to be some brilliant cross-examination that is going to change the trajectory of this nomination. But there is one thing that will, and that is the people of this country. That is them voting."

Democrats also dismissed efforts from Republicans to preemptively defend Barrett from attacks on her religious beliefs. No Democratic senator referred to the nominee's Catholic faith in opening statements on Monday, and none plans to do so in questioning later this week.

"Did you hear one of us raise that issue?" Sen. Richard Durbin, D-Ill., asked. "We have taken an oath to the Constitution, which says no religious test. Enough said."

"Her job will be to talk about the law and how you would apply the law to any litigation - whether it be guns, health care, abortion, campaign finance," Graham told reporters. "I think she'll do a … good job of understanding the role of a judge is different from that of us."

- White House Chief of Staff Mark Meadows refused to answer questions Monday from reporters outside the Senate room where Barrett's confirmation hearing was taking place after he was asked to keep his mask on.

- Senate Judiciary Chairman Lindsey Graham, R-S.C., took a few minutes during the hearing to submit into the record a letter from the Architect of the Capitol saying the room for the hearing was CDC compliant after Democrats chided the GOP for pushing ahead during the pandemic without proper precautions.

- A slight majority of American voters oppose holding confirmation hearings now, although opposition has eased since Trump announced his choice to replace Ginsburg, according to a Washington Post-ABC News poll.

- The American Bar Association late Sunday rated Barrett as "well qualified" to sit on the Supreme Court amid criticism about her relatively short experience on the bench, compared with that of some of her predecessors.