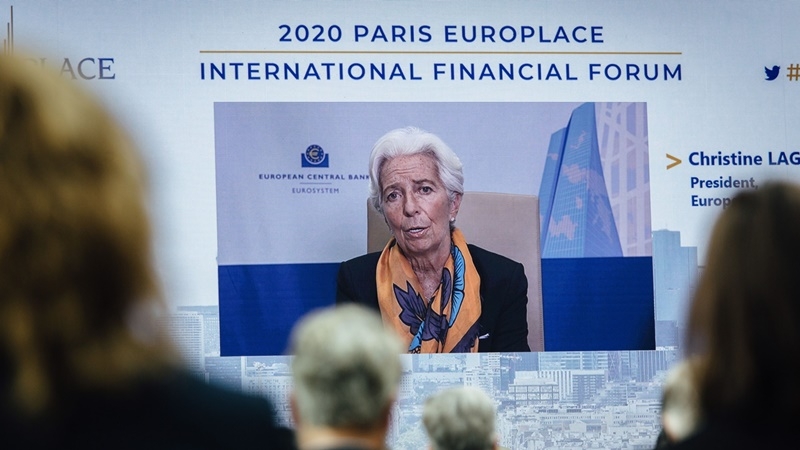 Christine Lagarde, president of the European Central Bank, is displayed on a screen during a remote address to the Europlace financial forum in Paris on Oct. 7, 2020. MUST CREDIT: Bloomberg photo by Cyril Marcilhacy.

Their appeal comes as countries impose new restrictions to curb a surge in infections that risks scuppering the region's nascent recovery and may raise the need for more stimulus.

"Clearly what we hope, policy makers will understand and will determine, is that those supports have to be continued for a period of time, even as the recovery takes hold," Lagarde said in an online discussion on the sidelines of the annual meetings of the International Monetary Fund.

Those measures should stay in place "even as the pandemic gradually phases out so that there is a smooth transition into a full-fledged recovery," she said.

The ECB has bought large amounts of debt issued by governments to finance their aid packages through its 1.35 trillion-euro ($1.6 trillion) emergency bond-buying program. Schnabel said policy makers will continue providing the backstop, and economists widely expect the scheme to be expanded by the end of the year.

Monetary policy "will remain a stable and reliable source of support throughout the crisis," Schnabel said on Monday. Guindos added that the ECB still has time to decide on whether or not to increase support, as it has spent less than 50% of the total envelope earmarked for the pandemic program.

"We're continuously analyzing how the economy is evolving, how inflation expectations are evolving," he said at an event organized by the Institute of International Finance, adding that updated projections are due in December.

ECB chief economist Philip Lane said in an interview published Sunday that the institution will decide "meeting by meeting" whether more monetary stimulus is needed. The Governing Council holds its next policy session on Oct. 29.