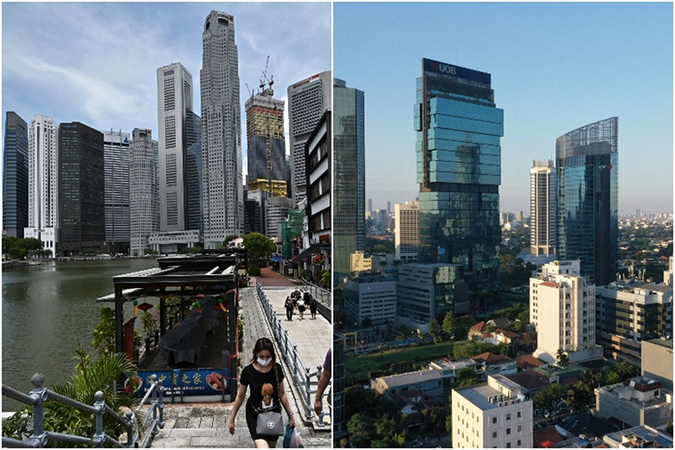 The reciprocal green lane will enable cross-border travel for essential business and official purposes to resume between both countries.PHOTOS: LIM YAOHUI, AFP

SINGAPORE - A reciprocal green lane between Singapore and Indonesia has been announced by the governments of both countries.

In a statement on Monday morning (Oct 12), both countries said negotiations over the green lane had concluded, and that applications would begin on Oct 26.

The reciprocal green lane will enable cross-border travel for essential business and official purposes to resume between both countries.

The eligible applicants for the green lane are Indonesian citizens, and Singapore citizens and residents.

Indonesian Foreign Minister Retno Marsudi told reporters in Indonesia on Monday that applicants from Singapore should be Singapore citizens or permanent residents, and must have sponsorship from an "Indonesian government/business entity".

They should also have applied for a visa online through Indonesia's directorate-general of immigration.

She added that applicants travelling to Singapore from Indonesia should be Indonesian nationals and must have sponsorship from a Singapore government agency or an enterprise in Singapore.

Indonesian nationals do not have to apply for a visa, but must instead apply for a Safe Travel Pass - similar to requirements for visitors from other countries with green lane or fast lane arrangements with Singapore.

These travellers will have to abide by the Covid-19 prevention and public health measures mutually agreed upon by both countries, including pre-departure and post-arrival Covid-19 swab tests from mutually recognised health institutions, said the two countries.

Ms Retno added that the pre-departure tests will have to be taken within 72 hours before departure from either country.

She also said that the points of entry and exit would be Tanah Merah Ferry Terminal and Batam Centre Ferry Terminal for sea travel; and Changi Airport and Jakarta’s Soekarno-Hatta International Airport for air travel.

The foreign affairs ministries of both countries said more details on the reciprocal green lane will be announced in due course.

Professor Teo Yik Ying, dean of the National University of Singapore’s Saw Swee Hock School of Public Health, said that despite Indonesia's high Covid-19 case counts, economic ties between the two countries are likely why the Singapore Government has decided to establish the green lane with Indonesia.

He added that Singapore is clearly aware of the risk of cross-border infections, but pre-departure and post-arrival tests will help to significantly reduce the possibility of infectious patients slipping into the community here.

In a Facebook post on Monday, Foreign Minister Vivian Balakrishnan said the arrangement with Indonesia is part of the “gradual and calibrated steps to reopen our borders and support our economic recovery”.

“It is important to re-establish connectivity with key economic partners such as Indonesia to maintain Singapore’s continued viability as a key business and transport hub,” he said.

Apart from Indonesia, Singapore currently has travel arrangements with eight other countries, with varied restrictions in place.

They must have been in either of the countries for at least 14 consecutive days before arriving in Singapore, and must test negative for the coronavirus upon arrival before leaving their place of accommodation.