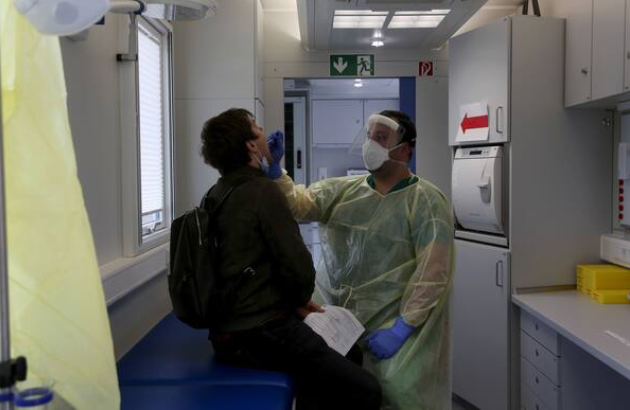 A health worker administers a covid-19 swab test on a traveler who had just arrived in Berlin on Oct. 12, 2020. MUST CREDIT: Bloomberg photo by Liesa Johannssen-Koppitz

The Czech Republic is closing schools as France, Italy, and the Netherlands prepare to widen restrictions to contain surging coronavirus cases around Europe.

British Prime Minister Boris Johnson announced bars and pubs will be closed in the worst-hit parts of England from Wednesday, but his top health adviser said it won't be enough.

The latest bout of harsher curbs comes as Germany's new coronavirus cases increased at the fastest pace since the height of the pandemic in the latest sign of how the region is struggling to keep the disease in check. Europe's largest economy will evaluate its own next steps on Wednesday.

Even with countries from Spain to Ukraine posting record increases in recent days, authorities are resisting reviving national lockdown restrictions. The focus is instead on local measures amid concerns about hammering economies again and sparking unrest.

Fueling public resistance to harsher restrictions is the impression that the virus has lost its bite amid relatively low hospitalization and death rates. But authorities expect the number of severe cases to increase as more older people get infected.

The European Union sought to provide some clarity to a confusing array of travel rules, with European affairs ministers signing off on a common threshold for imposing entry restrictions on Tuesday.

Under the nonbinding plan, unfettered travel will be allowed between regions with fewer than 25 new cases per 100,000 people for the previous 14 days, and with fewer than 4% of tests showing positive results.

None of the EU's 27 member states is currently below the agreed threshold, according to the latest data from the European Centre for Disease Prevention and Control.

The Czech Republic -- the European country with the fastest surge in recent weeks -- banned alcohol consumption in public, limited outdoor gatherings to six people and closed schools, restaurants and bars through early November.

Italian Prime Minister Giuseppe Conte signed a decree imposing new restrictions overnight, newswire Ansa reported Tuesday. The measures include ordering bars and restaurants to close by midnight, banning people from gathering outside them from 9 p.m. and limiting receptions for events such as weddings and baptisms to 30 people.

Dutch Prime Minister Mark Rutte is expected to announce stricter measures Tuesday evening, with local media reports saying that could include new restrictions on bars and restaurants. Rutte's cabinet will also stress that people should work from home if possible and limit the numbers of visitors.

French President Emmanuel Macron may announce additional restrictions during a planned television appearance on Wednesday. All measures are on the table, French Citizenship Minister Marlene Schiappa said in an interview on LCI TV, when asked if a curfew in the Paris region was possible.

The country has declared maximum alert status for six cities including Paris and Marseille, forcing the closure of bars and trade fairs. That's in addition to limits on gatherings and widespread requirements to wear masks that are already in place.

Irish health authorities are considering recommending additional curbs for Dublin and districts close to the border with Northern Ireland, local media reported, as more cases were admitted to hospitals. Some 224 patients are currently fighting the virus in hospital, almost double the Oct. 1 level.

In Northern Ireland, where cases have surged, health officials are considering recommending a six-week lockdown to try curb the virus, broadcaster RTE said.

Chris Whitty, the U.K.'s chief medical officer, said the British government will have to do more and "probably in some areas significantly more" to contain the virus. The warning follows on the heels of the prime minister's plan for a three-tier system of covid-19 alerts to simplify the imposition of lockdown measures.

In Germany, new cases climbed by 6,541 in the 24 hours through Tuesday morning, according to data from Johns Hopkins University. That's the highest daily increase since April 3 and only slightly below peak levels of nearly 7,000.

Chancellor Angela Merkel is preparing to meet with the premiers of Germany's 16 states on Wednesday to decide on new measures such as testing in nursing homes and isolating travelers from high-risk areas. After meeting with big-city mayors on Friday, she warned that Germany faces a crucial moment that can determine whether it regains or loses control of the pandemic.