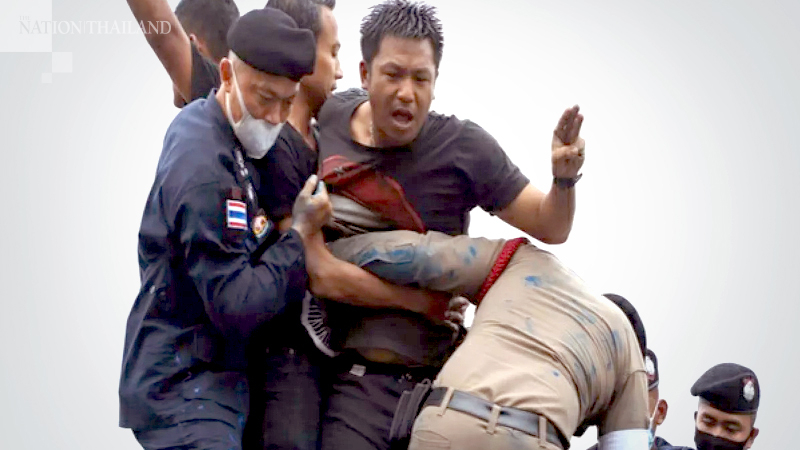 The arrest of 21 pro-democracy protesters from the Khana Ratsadon E-san Group (People’s Party from the Northeastern Region) on Tuesday evening is unlawful, the Thai Lawyers for Human Rights Centre said on Wednesday.

Prominent activist Jatupat “Pai Dao Din” Boonpattararaksa was arrested along with 20 other protesters, who participated in small rally at Democracy Monument ahead of the main rally scheduled for Wednesday, October 14.

Jatupat had led protesters from his home province of Khon Kaen to Ratchadamoen Road, where a Royal motorcade was scheduled to pass later in the day. Rallyists said police used the upcoming motorcade to justify the arrests.

“There are three main reasons why the arrest is unlawful,” said the association. “The first is it did not follow Public Assembly Act procedures. If the police decide to end public assembly they should first notify the protesters to stop their activities. Only when the protesters do not comply should officials proceed by requesting a court order to force them out of the area within a time limit. Police can only arrest the remaining protesters who fail to leave the area within the time frame announced by the court,” it said.

“The second reason is that the arrested protesters were not taken to a police station in the district where the protest took place to be notified of their charges,” the association said. “Instead, they were taken to Border Patrol Police Region 1 headquarters in Khlong Luang district, Pathum Thani, which is not a police station and not a workplace of investigation officers.

“The last reason is that those arrested were refused permission to consult with their lawyers from 5.45pm until 9pm,” the association pointed out.