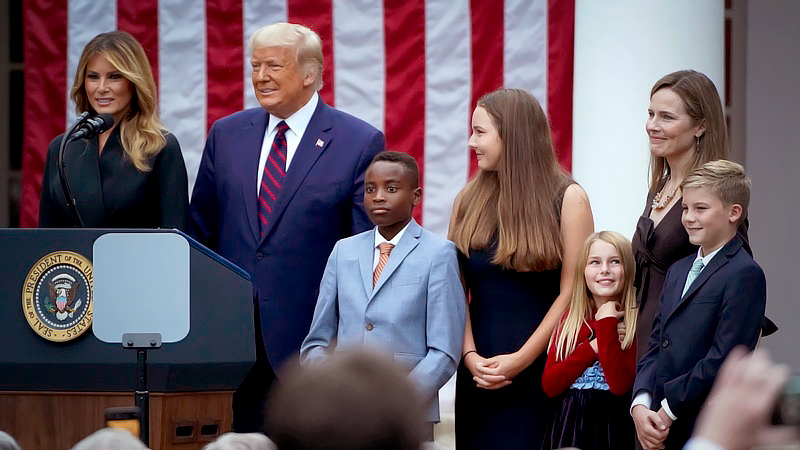 President Donald Trump and First Lady Melania Trump stand alongside Judge Amy Coney Barrett and her family in the Rose Garden of the White House on Sept. 26. MUST CREDIT: Washington Post photo by Jabin Botsford

The day after President Donald Trump made his dramatic return from the hospital, taking off his mask in an "Evita"-style moment outside the White House residence before walking inside, the office of first lady Melania Trump, who was also sick with covid-19, released an incredibly detailed statement on the precautions it had taken since March to protect the members of the staff - the butlers, housekeepers, florists, chefs - working in the executive residence.

The timing of the statement, about the care she is taking to prevent the spread of the virus while her infectious husband returned to the White House, was its own kind of statement. This first lady with what can at times seem like an antagonistic relationship with the press, who rarely gives interviews or deviates from her prepared remarks at public appearances, was following her own playbook.

"It's extraordinary in history, and it's a direct contradiction to the way in which he is behaving," says Myra Gutin, a professor at Rider University and author of "The President's Partner: The First Lady in the Twentieth Century." Gutin says she cannot think of any other first lady who's released a separate statement from her own office so diametrically opposed to the president's messaging - and with an election less than 30 days away.

"She very well may be responding to criticism of running a lax ship there at the White House based on her husband's activities, and she wants to say, 'No, no, no,' " says Katherine Jellison, a professor of history at Ohio University who has studied first ladies. "The criticism isn't just from the press, but the general public. I mean, my social media feed is all about the Trumps and their inner circle acting like modern-day Typhoid Marys."

A covid-19 quarantine was an excuse for the first lady to lay low, as seems to be her preference, and shrug off appearances for a campaign that is faltering among women and could benefit from her relatively higher popularity than the president's. And yet, here she was, calling attention to her contrast with her husband, even as they were literally stuck together under the same roof. (He has since left quarantine to work in the Oval Office and resume campaigning).

"My guess is that she's looking out for her own reputation and trying to distance herself from her husband's apparently cavalier attitude toward safety precautions," says Jellison.

Before the pandemic, "distancing" in Washington simply meant rhetorically backing away from some politically toxic figure or behavior. During the covid-19 pandemic, the first lady has made efforts to signal that she takes public-health guidelines seriously even if her husband doesn't.

This could be seen as distancing, in the traditional sense: The first lady creating some daylight between herself and the president for the sake of her own reputation. Just as easily, it could be an example of Melania Trump using her public persona to project that there is someone sensible in the Trump White House as her husband seeks a second term.

"The health of Residence staff members and their families are a paramount concern to the First Family," the statement from her office read. It talked about the mask mandate the first lady implemented for residence staff in April and how her office had hired a "well-being" consultant to help maintain the mental health of the folks who vacuum the halls and do the president's laundry. The president is only mentioned in the statement once, in the final paragraph about how staff were now wearing full personal protective equipment around him (yellow gowns, surgical masks, face shields, as the New York Times reported).

Notably, the statement from the first lady's office says nothing about people interacting with the residence staff having to wear masks to protect them in return.

It wasn't the first time since the president and first lady tested positive for the coronavirus that she has come across as the responsible one. The president took an unnecessary ride in an SUV to wave to supporters outside Walter Reed National Military Medical Center, to aghast reactions from doctors about the risk to the Secret Service agents trapped in the car with an active covid-19 patient. Meanwhile, it came out that the first lady had chosen not to visit the president in the hospital, "because that would expose the agents who would drive her there," an unnamed White House official told NBC News.

Throughout the pandemic, Melania Trump has repeatedly been better at messaging about covid-19 than the president. She was the first member of the Trump family to wear a mask in public, and she filmed a PSA about mask-wearing on the same day Trump said at a press briefing, "I just don't want to wear one." Her social media feeds have been a constant parade of CDC guidance, and she's put it into practice, encouraging teleworking and mandating staffers wear masks in her offices in the East Wing, according to Stephanie Grisham, the first lady's press secretary.

On her last solo appearance, a Sept. 17 trip to visit a New Hampshire hospital that has a cuddling program to soothe babies born with opioid addition, she wore a mask and required that her press pool and everyone in proximity to her wear masks and have been tested for the coronavirus.

The first lady's efforts to tout her responsibility to White House staff also has allowed her to distance herself from a news story that could threaten her reputation by making her seem more like her husband.

The night before the president made her test results public along with his own, CNN's Anderson Copper played tapes of her private conversations with former close friend and senior adviser Stephanie Winston Wolkoff, filled with vulgar language and what many have seen as callous, dismissive remarks about migrant families being separated at the border. ("Give me a f---ing break," she said in a mocking tone, regarding the media constantly asking her about her husband's immigration policies.) She even savaged Christmas, a holiday her husband regularly highlighted on the campaign trail, saying that liberals were trying to kill it.

"Who gives a f--- about Christmas?" Melania Trump asked on the tapes, expressing disdain for the traditional first lady duty of overseeing the White House Christmas decorations. (Although, to be fair, she mostly seemed to be upset about "working ... my a-- off" to decorate the White House only to be criticized for her choices as if they were a major affront to the nation.)

More shocking were her comments that children detained away from their parents were happy because they had a bed and "a cabinet for my clothes" and that was better than what they'd had in the Central American countries they were fleeing. She also said that "moms and kids" who claim they are fleeing from gang violence were "teached how to do it."

Winston Wolkoff was on CNN to promote her tell-all, "Melania & Me," released in September, about her friendship with the first lady and its demise after she says she was "thrown under the bus" in a scandal relating to Trump's $107 million inauguration.

"People need to know who she really is and that she is just like him," Winston Wolkoff told The Washington Post about her motivations for releasing the recordings. "There is no yin and yang. They are one and the same."

Grisham, the first lady's press secretary, issued a fiery rebuke, telling The Post that she had no way of knowing if the tapes were edited: The former White House volunteer's "only intent," said Grisham, "was to secretly tape the first lady in order to peddle herself and her salacious book."

The tapes are a rare window into how this press-shy, meticulously scripted first lady really thinks and speaks. "She's very fond of the f-word, which might be a first for first ladies," says Jellison.

They also run against her image as the responsible Trump who is not like the others. To judge by Winston Wolkoff's tapes, there might not be much distance at all between the first lady and the president.

For all of her tweets about CDC regulations, she has also been inexplicably inconsistent, sometimes showing up to public appearances at the president's side without a mask and sometimes being the only person boarding Air Force One with one. At the first debate, she joined the rest of the Trump family in taking off her mask, even as staff of the Cleveland Clinic tried to hand them some.

After the debate a maskless Melania Trump congratulated the president onstage; a little over 12 feet away, Jill Biden conspicuously wore hers. It's one of the last images most people have of the first lady before her diagnosis. Another is her, maskless again, clapping for Amy Coney Barrett at a Rose Garden event celebrating Barrett's nomination to the Supreme Court - an event that would soon be linked to a covid-19 outbreak among Republicans in attendance.

"If she genuinely believed that wearing a mask would save lives, she would have always had one," says Winston Wolkoff. "The reality is she does believe what he thinks on 95 percent of things. They do believe they're untouchable."

The White House has assiduously dodged questions about when President Trump last tested negative for the coronavirus, making it difficult for the public to deduce how and when he and first lady might have contracted the virus and whom they might have transmitted it to prior to their diagnoses. A White House spokesman last week told reporters that how the virus got into the White House was "sort of an unknowable question" (though at least one former official for the Centers for Disease Control begged to differ) and that the focus now was on preventing further transmission.

But reporters have since revealed that members of the residence staff had taken ill long before the first lady's diagnosis prompted questions about their safety. Four residence staffers tested positive for the coronavirus about three weeks ago: three housekeepers and an assistant to the chief usher, Timothy Harleth. Not only did Harleth ask the staff to "use discretion" about the positive cases, he told the first family about the cases, the New York Times reported. The White House kept it under wraps and also did not disclose that the head of security, Crede Bailey, is "gravely ill" with covid-19 and was taken to the hospital in late September, as reported by Bloomberg News last week.

Melania Trump's office did not release a statement about that.