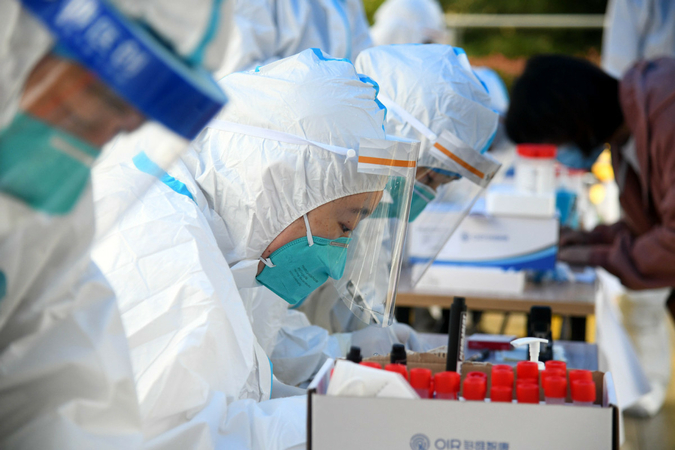 The COVID-19 outbreak in Qingdao, Shandong province, has been traced to two dock workers, officials said on Friday. It was spread through poor disinfection of a CT scanning room shared by patients with the novel coronavirus and other conditions at Qingdao Pulmonary Hospital, they said.

The outbreak prompted a campaign aiming to test the city's 11 million residents in five days.

Between Sunday and Tuesday, the city reported a cluster of 12 confirmed coronavirus cases.

Two dock workers at Qingdao Port had tested positive on Sept 24 but were initially asymptomatic. One, surnamed Dong, began showing symptoms on Wednesday, bringing the total of confirmed cases to 13.

At a news conference on Friday, Ma Lixin, Party secretary of the Shandong Center for Disease Control and Prevention, said the cases that were traced to the dock workers had only one thing in common, the link to the hospital.

Ma said among the patients, one of the 12 surnamed Li, and her caregiver, Niu, had been infected in the CT scanning room where the dock workers had been examined the previous day. Disinfection had not been conducted properly, she said.

There was no contact between the dock workers and the 12 others outside the hospital, so the community was not been exposed, Ma said. The finding was based on timely mass contact tracing done by over 30 epidemiologists and 800 police officers. They spent 72 hours analyzing over 10,000 hours of video and used big data techniques, she added.

Xue Qingguo, Qingdao's vicemayor, said the 13 patients with confirmed cases are being isolated and treated at designated hospitals.

Ma urged all hospitals to scrutinize loopholes in epidemic prevention and control and improve management of medical facilities.

Sui Zhenhua, director of the Qingdao health commission, was suspended and is being investigated, and Deng Kai, dean of the pulmonary hospital, was removed, according to statements from the city government on Thursday.

"As of 10 am on Friday, more than 10.82 million people had been sampled, while over 10.43 million collected samples had been tested. Except for the cases already reported, no new positive samples have been detected," said Xue, adding that the city had almost finished mass testing six hours ahead of the designated time.

Because of the nature of the outbreak, the city was able to use a mixed testing approach in which 10 samples would be tested together to improve efficiency.

"If a 10-in-1 sample is positive, we will inform the 10 people to undergo separate isolation and individual tests to further identify the carrier of the positive sample," said Zhang Huaqiang of the municipal center for disease prevention and control.

Xinhua contributed to this story.