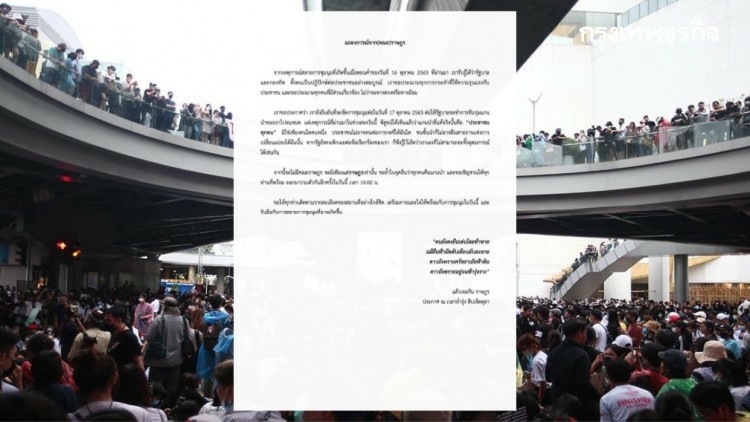 The newly formed Khana Ratsadon 2563 (People’s Party 2020) has changed its name to Ratsadon (The People), and vowed to hold another rally on Saturday at 4pm.

The United Front of Thammasat and Demonstration group on Saturday announced the change of name on their Facebook page, while condemning the government and the Army for using violence against peaceful protesters at their rally site at the Pathumwan intersection on Friday evening.

Crowd control police used water cannons and shields to force protesters out of the intersection area and back off to in front of Chulalongkorn University, from where they dispersed at around 8pm.

“We will hold a rally on Saturday even though most of our leaders have already been arrested by the government,” said the announcement. “However, the true leader is the people, not just an individual. From now on there will be no Khana Ratsadon [People’s Party], there will only be Ratsadon [The People], where everyone is a leader.

“The gathering will begin at 4pm, while the location will be announced later,” added the announcement.

“Please stay tuned for updates, and prepare your body and mind for the rally on Saturday, as well as prepare for the authority’s attempt to break up the rally.”