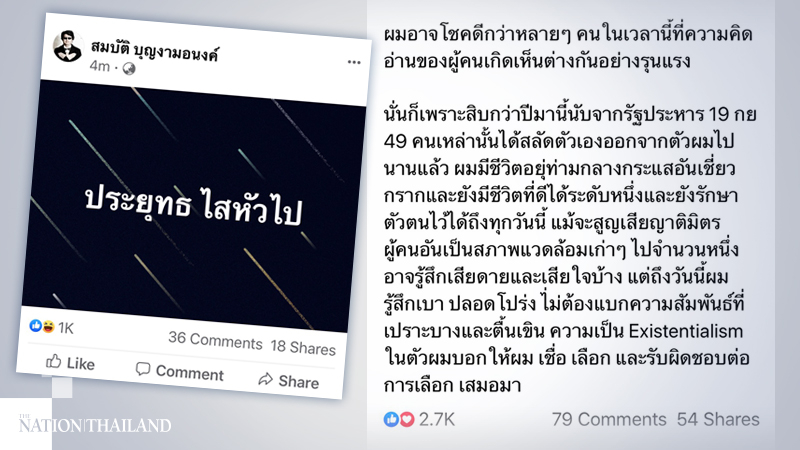 The government has come under fire from all sections of society over the violent crackdown on student-led protesters on Friday. Am

Among celebrities demanding the resignation of Prime Minister Prayut Chan-o-cha was National Artist Suchart Sawatsri and activist Nuttaa Mahattana, on Saturday via their Facebook page.

Nuttaa updated this morning that the #ประยุทธ์ออกไป (Prayut, Resign) was trending on top on Twitter, following by other political-related trends, such as #ม็อบ17ตุลา (The mob of October 17) and #แบนดาราสลิ่ม (To ban those actors and actresses who support the government).

Meanwhile, Chulalongkorn economist Narong Petchprasert stated that there were two groups that disagreed with each other on the role of the monarchy – one wants to maintain the status quo and the other wants reform – while the third party aims to exploit the conflict between them to gain power and wealth.

Narong said that “This last group is dangerous to the Nation, People and the Palace”.

Meanwhile normal people posted, shared, and commented about Friday's crackdown. Most of them felt sorry for the people at the site and expressed their anger at officials. Some people vowed on their social media to unfriend online those who agreed with the violent crackdown and showed sympathy to the police.

Sombat Boonngamanong, a pro-democracy activist, stated via his Facebook page that he has faced the "unfriending" situation since the coup in 2006. However, it was okay after having faced the situation.