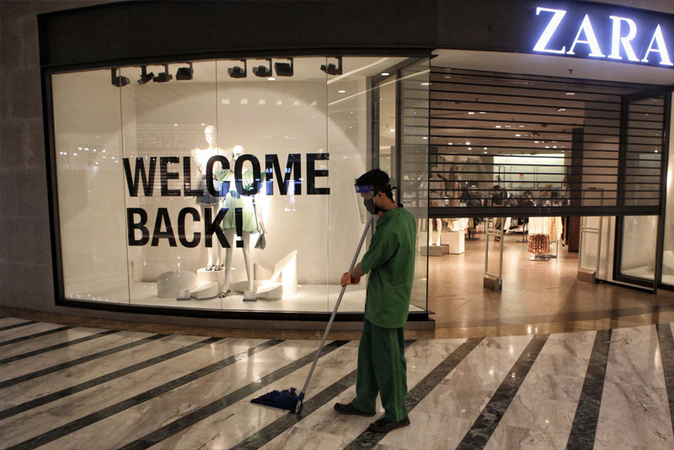 A janitor sweeps the floor at Central Park Mall, West Jakarta, on June 3. (JP/Seto Wardhana) This article was published in thejakartapost.com with the title "Indonesians most optimistic in SE Asia about economic recovery". Click to read: https://www.thejakartapost.com/news/2020/10/16/indonesians-most-optimistic-in-se-asia-about-economic-recovery.html. Download The Jakarta Post app for easier and faster news access: Android: http://bit.ly/tjp-android iOS: http://bit.ly/tjp-ios

A recent survey has found that Indonesians are the most optimistic of their regional peers about the speed of economic recovery from the COVID-19 pandemic.

A recent survey has found that Indonesians are the most optimistic of their regional peers about the speed of economic recovery from the COVID-19 pandemic.

The survey, which was conducted by market research firm Ipsos between Sept. 18 to 22 and involved 500 people from six countries in the region, found that 75 percent of Indonesian respondents believed the economy would improve in the next six months.

The optimism rate in Indonesia was the highest in the study. In Vietnam, 54 percent answered the same way, followed by 50 percent from the Philippines and 28 percent from Singapore.

“We hope that the optimism can be a reference and give momentum to the central and regional governments to maintain economic recovery in the fourth quarter of 2020 with the various economic stimuli that are being implemented or planned as an effort by the government,” Soepreapto Tan, managing director of Ipsos in Indonesia, said in the survey report published on Friday.

The survey showed, Soeprapto noted, that the reinstatement of large-scale social restrictions (PSBB) in Jakarta on Sept. 14 had little effect on optimism.

Some 74 percent of respondents from Indonesia said they were suffering a decline in income during the pandemic. The figure fell from 84 percent in the previous survey in May, when Indonesia was enforcing strict restrictions.

The second survey also found that 60 percent of Indonesian respondents wanted the government to concentrate on handling and preventing the spread of COVID-19 for the next six months. Another 16 percent believed the government should focus on providing economic stimulus and social aid, while 13 percent demanded focus on the protection of jobs and the remaining 11 percent asked for authorities to maintain the price stability of goods.

Indonesia’s economy was in “bad shape”, according to 57 percent of local respondents. Another 17 percent said the country was in a “really bad” economic situation.

Despite some sectors seeing improvements, such as rising exports of agricultural and manufactured goods in September, many economists warn that Indonesia will enter its first recession since the 1998 Asian financial crisis as a result of the COVID-19 pandemic.