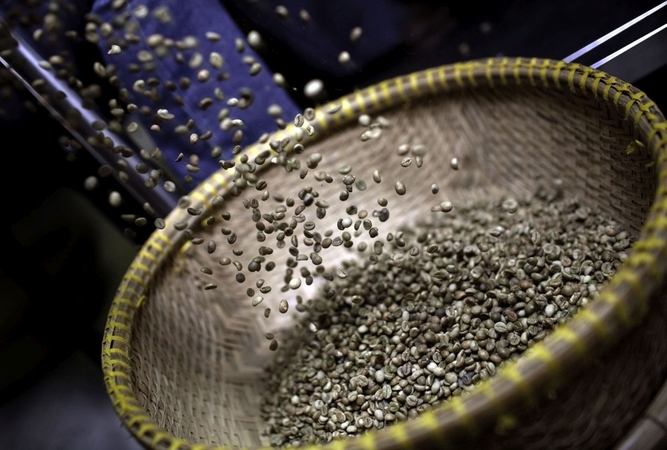 Farmers in Vietnam's largest coffee-growing province usually start picking new beans around the middle of October. But this year in Dak Lak, unceasing rains from La Nina plus tropical storms have put harvesting on hold, according to the Buon Ma Thuot Coffee Association.

"Planters are unable to selectively pick ripe fruit as it's been raining every day for a week." Trinh Duc Minh, the head of the association, said by phone Thursday. "We're unsure when the harvest can start as another depression is heading toward the central part of Vietnam." Only 10% of the coffee trees in the province have ripe fruit, much lower than previous years, he said.

Vietnam is the world's biggest producer of robusta used in espresso and instant coffee, and delays could cut shipments in coming months. London robusta futures climbed and headed for the strongest close in more than two weeks.

Selective harvesting in the Central Highlands, the coffee belt, may start in late October or early November if weather permits, said 11 traders and analysts surveyed by Bloomberg. Strip picking won't peak till end-November at the earliest, said seven, while the others see the peak in early December. "The fruit can't ripen because of high humidity," said Nguyen Ngoc Minh, a farmer in neighboring Dak Nong province. "Harvesting may be delayed by a month."

The rainy season, which usually ends in the first week of November, may continue until late next month under the influence of the cool air caused by La Nina, said Dang Van Chien, director of Dak Lak's weather office. La Nina, which occurs when the surface of the Pacific Ocean cools, prolongs the rainy season in the Central Highlands, Chien said by phone on Friday.

Showers are likely to persist in areas close to the coast in the provinces of Dak Lak, Gia Lai and Lam Dong after the rainy season ends, he said. "Harvesting and drying of beans may not be easy." Central Highlands rainfall next month and in December is expected to be 20% to 40% higher than the long-term average, the national forecasting center said. The central part of the country, including the coffee belt, may receive four more storms by the year-end.

"If rains persist as forecast, apart from the quality concerns, a possible shortage in supply for shipments in coming months is also worrying me," said Le Tien Hung, chief executive officer of the second-largest exporter Simexco Dak Lak. His firm plans to ship 100,000 tons in the season ending September.

Total output in the world's largest robusta grower is forecast at 1.7 million tons, a 6% decline from the 2019-20 season, according to 13 traders and analysts surveyed by Bloomberg. The crop is expected to be smaller "due to dry weather during the development of coffee cherries," said Judith Ganes, president of New York-based J. Ganes Consulting.

Farmers and middlemen have probably carried a stock of 200,000 tons over to the new season, 50,000 tons less than a year earlier, while warehouses in the Ho Chi Minh City area had probably 190,000 tons in inventories as of Sept. 30, according to the survey. Vietnam shipped close to 390,000 tons of beans in the last quarter of last year, customs data show.

The 2021-22 season doesn't look good either as La Nina is seen bringing off-season rains. Precipitation from January to March is seen at 20-50mm, above the historical average, while April rainfall will be 30% higher, the weather center said. "Off-season rains may harm trees in those months when they require controlled watering, especially during flowering," said Chien.