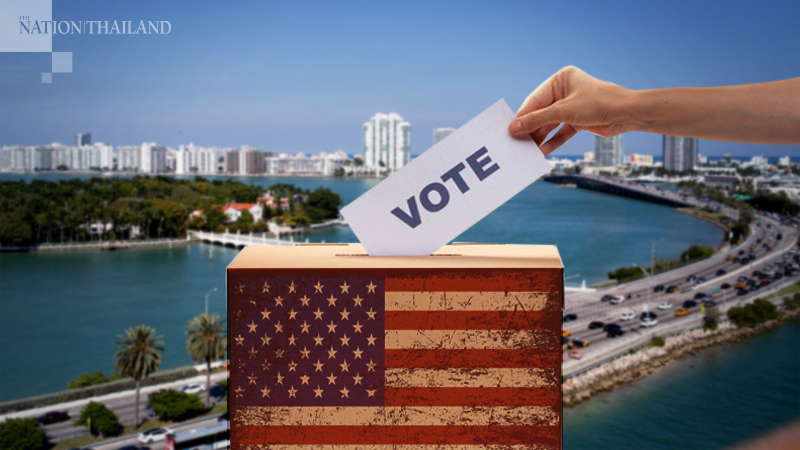 Thousands of voters flocked to the polls throughout Florida on the state's first day of in-person voting Monday despite heavy rains across the state, adding to evidence that Americans are unusually eager to cast ballots in this year's presidential election.

In Miami, Fort Lauderdale, Fort Myers, Sarasota, St. Petersburg and many other Florida communities, voters lined up before polls opened to cast their ballots in person at the first available moment.

Kyle Woodard, a 44-year-old schoolteacher from Pompano Beach, said "it's just a really important year to vote," after casting his ballot at the African-American Research Museum in Fort Lauderdale.

"I'm really inspired based on what's going on in the country," Woodard said. "So the first chance I got, I was going to take it."

Woodard said President Donald Trump's constant attacks on mail voting, including unsubstantiated claims that it would result in widespread fraud, are a blatant attempt at voter suppression. "Being Black, I've seen a lot of suppression my whole life," he said. "This is nothing new."

With early voting underway across the United States, and Americans casting ballots by mail at historic numbers, nearly 30 million have already voted with two weeks to go before Election Day, according to a tally by political scientist Michael McDonald of the University of Florida. That represents more than a fifth of total turnout in 2016.

Even as Americans are turning out in record numbers, many of the rules governing which ballots will be counted and when are still the subject of political and legal wrangling.

In North Carolina, a weeks-long dispute over mail ballots returned without a witness signature came to an end on Monday, allowing county election administrators to resume the process to fix, or "cure," thousands of deficient ballots left in limbo as the state continues its early voting period.

An agreement announced by state attorney general Josh Stein stated that ballots without a witness signature will not be "curable" with a simple certification or affidavit, reversing previous guidance that drew multiple lawsuits from Republicans. Voters who return ballots without a witness signature will receive a new ballot in the mail, the State Board of Elections stated in guidance issued Monday afternoon. The first ballot will be spoiled, and they will be able to cast a new vote, unless they already voted in person.

A voter certification will serve to correct other ballot problems, such as a missing voter signature or witness address.

Stein said in a tweet that his office, the State Board of Elections and the Republican National Committee agreed with the new policy.

In Pennsylvania, Republicans in the state legislature announced Monday that they have no plans to pass a new law allowing county election officials to begin processing mail ballots before Nov. 3, which is prohibited under current law.

The decision makes it all but certain, barring a landslide, that a result won't be known in Pennsylvania on Election Day. It took more than two weeks for election officials to complete the count after Pennsylvania's spring primary.

In Florida, meanwhile, statewide data from Friday showed a distinct advantage for Democrats among mail voters, with more than 1 million Democrats casting ballots by mail compared to about 620,000 Republicans, according to the Florida Democratic Party.

It was too early to say whether the first day of in-person voting would favor Democrats or Republicans. In other states where such data is available, enthusiasm is far higher among registered Democrats among both mail and in-person voting.

In downtown Sarasota, a major Republican stronghold in Florida since the 1970s, people began lining up to cast their ballots 90 minutes before Supervisor of Elections Ron Turner opened his doors at 8:30 a.m. The line stretched out of the county office building, constructed as a hotel in 1925 by circus magnate John Ringling's brother, Charles, and into a tree-shaded courtyard where a steady breeze cooled the crowd. A partisan breakdown of turnout so far was not immediately available.

In Lee County, home of Fort Myers, Republicans were outvoting Democrats both by mail and in person by the end of the day. Lee voted overwhelmingly for Trump in 2016.

"Trump all the way," said Melinda McGehee, 53, as she stood next to her friend and fellow Republican voter, Alexandra Connor, 51, in Fort Lauderdale. "Because being in health care, I think it's super important everyone gets what Trump's trying to do with health care. I'm super scared if Biden wins what's going to happen to my career, my parents, my family and my friends with health care."

The coronavirus is doing more in Florida than increasing mail balloting; it also shuttered an elections office in Okaloosa County, in the state's Panhandle, after Elections Supervisor Paul Lux and several other employees tested positive for the virus, according to the Destin Log.

In-person voting also kicked off in Colorado Monday, but voting centers were largely quiet in a state where the majority of voters have cast ballots by mail or drop box for many years.

Yet mail ballot returns show historic enthusiasm in Colorado, too, with Secretary of State Jena Griswold reporting that 24 times more voters have returned their ballots than by this time in 2016. She also said a historic number of people applied to be election judges.

"I was really motivated to get here and get my ballot in," said Robbie Martinez, 46, a journeyman electrician, after dropping his ballot into a drop box in downtown Denver. "I have never liked Trump. I couldn't even believe he became president. It's been a circus."