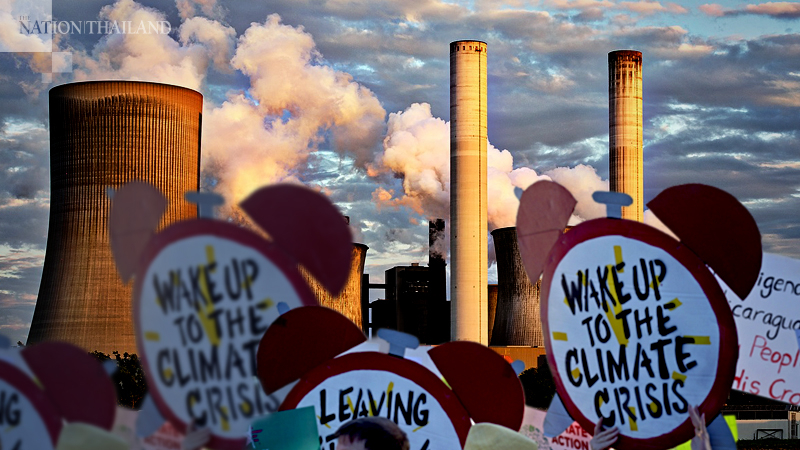 China delivered a diatribe against U.S. climate policies on Monday, saying that under President Donald Trump, the United States "is widely viewed as a consensus-breaker and a troublemaker."

Beijing's Foreign Affairs Ministry blamed Trump's "negative stance" and "retrogression on climate change" for undermining progress on an international climate accord. Trump, who plans to formally pull out of the Paris climate agreement the day after Election Day, had "seriously undermined the fairness, efficiency and effectiveness of global environmental governance," the ministry said in a fact sheet.

The barrage from Beijing resembled the tit-for-tat criticism that China and the United States have traded on subjects such as human rights, trade and the expulsion of reporters and diplomats, but climate policies have been largely the exception. Not anymore.

China, the world's biggest emitter of greenhouse gases, took aim at the United States, the second-biggest emitter, after the State Department on Sept. 25 issued a "China's Environmental Abuses Fact Sheet," which said that Beijing "threatens the global economy and global health by unsustainably exploiting natural resources and exporting its willful disregard for the environment through its One Belt One Road initiative."

In the U.S. fact sheet, Secretary of State Mike Pompeo said "too much of the Chinese Communist Party's economy is built on willful disregard for air, land, and water quality. The Chinese people - and the world - deserve better."

"This seems like a reminder that people who live in glass houses shouldn't throw stones," Jason Bordoff, director of Columbia University's global energy center, said of the Chinese report. "We put out a statement attacking their environmental record and they put out an even stronger one, and the Trump administration has given them a lot to work with."

He said the dueling attacks were "a reminder of how strained the U.S.-China relationship is, and there's going to need to be a lot of work to be done to allow for a constructive relationship on climate moving forward."

The relationship between China and the United States has been deteriorating for years. China has seized islands in the South China Sea, deploying military forces to the disputed territories. It has detained in prison camps large numbers of Uighurs seen as possible threats. And it has pursued trade policies that have made it difficult for American companies to do business there.

During his administration, President Barack Obama managed to make climate change key to the relationship and succeeded in wooing Beijing to support broad policies to slow the growth in greenhouse gases and shift the Chinese economy toward renewable sources of energy.

The planet has already warmed by 1 degree Celsius since the late 1800s, and many parts of the world have already reached the 2 degree Celsius mark scientists say should be the limit to prevent dire climate change.

On Monday, however, China's report reiterated many of the weak but well-known points in the U.S. climate policy. The United States has fallen behind China in emissions, but its emissions per capita are twice as high as China's, whose population is five times as big. China also criticized Trump for rolling back nearly 70 domestic policies - signaling the pullout from the Paris climate accord - and failing to honor the U.S. agreement to pay its share of Green Climate Fund contributions. It said the United States accounts for 95.7% of total international arrears to the fund.

The ministry also said that "due to the negative stance of the U.S.," summit meetings of the world's 20 largest economies had "failed to reach consensus on climate change for three consecutive years starting from 2017, and each time the '19+1' approach was adopted as a compromise."

"China's fact sheet on U.S. damage to the environment is a slap in the face for a country that normally prides itself on its environmental leadership," said Joanna Lewis, director of Georgetown University's science, technology and international affairs program. "It demonstrates how the U.S. has lost almost all of its moral high ground when it comes to engaging with China and other emerging economies on the environment and climate change in particular."

She said, "While China's environmental record is highly problematic, the country has made impressive gains in many areas while the current U.S. administration continues to roll back many hard-won environmental protection laws."

Beijing won praise internationally in September when it announced that its greenhouse gas emissions would peak in the year 2030 and that it would reach net-zero emissions for the entire economy by 2060.

China "has been the world's largest annual greenhouse gas (GHG) emitter since 2006," the State Department report said. "China's total emissions are twice that of the United States and nearly one third of all emissions globally."

China replied in its fact sheet that between 1751 and 2010, emissions from U.S. energy and industrial sectors accounted for 27.9% of the global total and three times as much as China.

Sarah Ladislaw, director of the energy security and climate change program at the Center for Strategic and International Studies, said that the Chinese statement "will irk the Trump administration but not provoke them too much because climate change is not a high-priority issue for this administration."

"The U.S. and China share the same challenge - some things they do are great for climate and other things are damaging," she said. She said the United States was "the engine of global innovation, but at the federal level, it fails to stay true to its commitment when political leadership changes. China has set ambitious targets for itself and is a clean energy manufacturing leader, but it is also a big source of global emissions both at home and through its investments overseas and is not always transparent about its behavior."

Pete Ogden, a vice president at the United Nations Foundation and former climate expert during the Obama administration, said, "When it comes to the critical and urgent climate and environmental threats that the world is facing, this diplomatic energy of the U.S. and China should be focused on solutions, not recriminations."