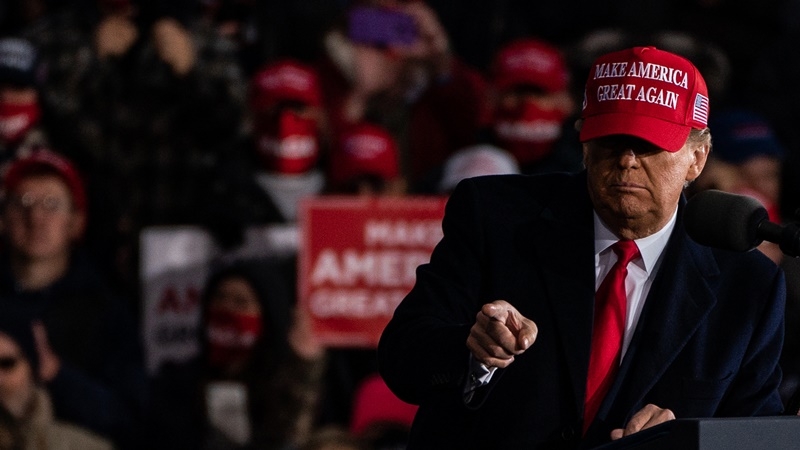 President Donald Trump is shown at a campaign event at the Muskegon County Airport in Michigan on Saturday, Oct. 17, 2020. MUST CREDIT: Washington Post photo by Salwan Georges

WASHINGTON - President Donald Trump dismissed precautions to prevent the spread of the coronavirus and attacked the nation's top infectious-disease expert as a "disaster" Monday, saying people are getting tired of the focus on a pandemic that has killed more than 219,000 Americans and continues to infect thousands of people across the country.

The president claimed that voters do not want to hear more from the country's scientific leaders about the pandemic, responding angrily to Anthony Fauci's critical interview with CBS's "60 Minutes."

"People are tired of listening to Fauci and these idiots," Trump said in a call with his campaign staff Monday that was intended to instill confidence in his reelection bid two weeks before Election Day. He baselessly suggested that Fauci's advice on how best to respond to the outbreak was so bad it would have led to the deaths of hundreds of thousands more people.

"And yet we keep him," Trump continued, calling in from his Las Vegas hotel. "Every day he goes on television there's always a bomb, but there's a bigger bomb if you fire him. But Fauci is a disaster."

Later in the day, the president again criticized Fauci, mocking the director of the National Institute of Allergy and Infectious Diseases for his opening pitch at Nationals Park earlier this year and misrepresenting some of the doctor's positions on the coronavirus in a series of tweets.

Trump's comments and his aggressive travel schedule, which continued Monday with two stops in Arizona as Democratic presidential nominee Joe Biden holed up in his Delaware home, is part of a broader and more aggressive bet that the American public will reward his projection of strength and general defiance toward the virus, which hospitalized the president and infected many of his top aides this month.

He said Monday that Americans were no longer interested in taking precautions to prevent the spread of the coronavirus.

"They're getting tired of the pandemic, aren't they? You turn on CNN. That's all they cover. Covid, covid, pandemic. Covid, covid, covid. They're trying to talk people out of voting . . . People aren't buying it, CNN, you dumb bastards," Trump said at a rally in Arizona. The crowd was packed shoulder-to-shoulder outside, with few masks in sight.

Trump is expected to do three or four rallies a day starting this weekend, according to people familiar with the plans.

The president's comments come as infection rates have risen in recent weeks amid cooling temperatures in more than half of states, with national daily infection rates returning to midsummer levels. Voters continue to give Trump poor marks on his handling of the pandemic; nearly two out of three voters in a Washington Post-ABC News poll this month said they were "very" or "somewhat" worried that they or a family member might catch the virus. Eight percent said an immediate family member has been infected.

Trump aides said they had hoped the last-minute call with staffers would not become a story about the coronavirus. Senior advisers to the president say they still want the closing message to be about the economy and the negative impacts of a Biden victory, with a campaign focus on Florida, Michigan, North Carolina and Pennsylvania. They see the coronavirus - and the president's handling of the pandemic - as their biggest political weakness, and Biden's top advisers agree. But Trump continues to call attention to the outbreak.

For months, Trump has treated Fauci delicately even as divisions have grown, occasionally praising him and assuring Americans that he is intimately involved in the White House response. Trump's campaign aides have even put excerpts from a Fauci interview into their advertising, hoping to convince voters that the infectious-disease expert has approved of Trump's response to the coronavirus. Fauci has reacted angrily to the ads, which he says quote him out of context.

"I do not and nor will I ever publicly endorse any political candidate," Fauci said in his Sunday interview on "60 minutes." "They're sticking me right in the middle of a campaign ad, which I thought was outrageous."

Trump tried to tie Biden to Fauci on Monday in a seeming attack that his Democratic rival said he welcomed.

"He wants to listen to Dr. Fauci," Trump said of Biden at the rally.

Biden said he considered the claim that he would listen to scientists "a badge of honor."

"Mr. President, you're right about one thing: the American people are tired. They're tired of your lies about this virus," a Biden statement read. "They're tired of watching more Americans die and more people lose their jobs because you refuse to take this pandemic seriously."

The president was angry at Fauci after he was critical of Trump and the White House in the "60 Minutes" interview, saying that the president's conduct made it unsurprising that he caught the coronavirus and that the administration had tried to muzzle him. Fauci has a higher approval rating than the president, which has long rankled Trump, according to advisers who, like others, spoke on the condition of anonymity to describe internal discussions. Trump has also repeatedly told top senior aides that Fauci is on TV far too often.

The president later posted a video online of him throwing a first pitch and another video of Fauci's first pitch.

Trump has been barnstorming the West Coast in recent days, while Biden has mostly stayed out of public view, preparing for Thursday's debate and avoiding the large crowds amid a global pandemic.

Trump is taking a less rigorous preparation plan for the debate, advisers said, and is unlikely to do extensive formal preparations. The president is instead maintaining an extensive in-person campaign schedule and is expected to visit Florida after the debate for a series of events, aides said.

On Monday afternoon, campaign manager Bill Stepien wrote a letter to the debate commission, seeking to move the conversation in the final debate away from domestic issues such as coronavirus to foreign policy issues. The president's aides have made clear that the president wants to debate the foreign business dealings of Biden's youngest son, Hunter. Trump and his allies have also repeatedly claimed that the debate commission, which is bipartisan, is being unfair to him even though its rules apply equally to both candidates and the terms of the face-to-face events were negotiated in advance with both campaigns.

The Monday call, which some reporters were invited to listen in on, appeared to have been motivated by recent news stories about internal concerns about the president's reelection chances and division within the president's team. He spoke about The New York Times and The Washington Post with particular derision and threatened to take legal action because of a poll's results.

The call had been scheduled as a staff-wide morale booster, with top aides and the president presenting a rosy case for his reelection and trying to boost what several aides said were flagging spirits.

Trump repeatedly told his campaign staff on the call that he had never felt more confident as a politician that he would win election - even though he said he was concerned two or three weeks ago during his hospital stay after contracting the coronavirus. He repeatedly attacked the news media but also said he hoped the media was listening to the call.

He praised his senior team, naming aides one by one - Stepien, White House Chief of Staff Mark Meadows, campaign strategist Jason Miller - and criticized news stories that mentioned them in specific detail.

"I love my team. I am happy with my team," Trump said after denying friction among his top lieutenants.

Trump ticked through individual states and bragged about the crowds he gets and the unspecified poll results he has seen, which he claimed were different from the voter "suppression polls" reported publicly.

"I go to a rally I have 25,000 people," Trump said, greatly exaggerating the size of his crowds while making a comparison with Biden. "He goes to a rally, he has four people." Most of Trump's rallies are held outside at airports because of the pandemic.

Trump also made a range of startling accusations and comments, including that Biden should be "in jail."

"He's a criminal," Trump said, without offering evidence to what crime he allegedly had committed.

Trump also made repeated references to alleged communications between Biden's son Hunter and foreign officials that have been reported in the New York Post in recent days. The newspaper said the information it reported was provided by Rudy Giuliani, the president's personal attorney, who has not shared with other news organizations a hard drive from a computer allegedly owned by Hunter Biden that the former New York mayor claims to possess. The Washington Post has not been able to independently verify the information in the New York Post reports.

"I think Joe Biden has a scandal coming up that will make him almost an impotent candidate," he said. "This scandal is so big. And the only thing he has going is he has a corrupt press who will not write about it."

Trump made a number of dubious or false statements, including saying he was back at campaign rallies one day after he was released from the hospital. It was one week later. He again said he could lose the election only if it were "rigged" and made false claims about voter fraud. He exaggerated his record in terms he usually uses on the campaign trail.

The president said The New York Times has not reached out to him in two years, but the outlet interviewed him in August and like almost all news organizations regularly requests comment from the White House.

In closing, he offered some advice for his campaign's employees, saying they need to "work their asses off."

"You have two weeks," he said. "Don't listen to anybody. Don't even read the papers."