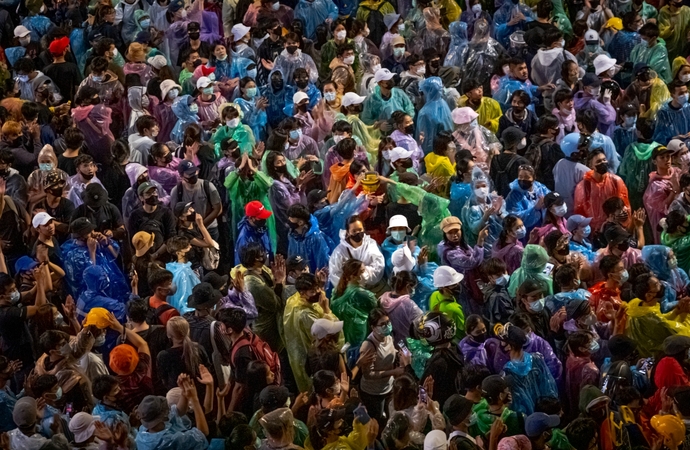 Despite rising tensions and intensifying protests, pro-democracy activists have found humour in the situation and come up with funny slang terms to describe people or the state of affairs.

For instance, monks and novice monks in their orange robes are referred to as “carrot” and “baby carrot”, “broccoli” describes soldiers thanks to their green uniforms, police in khaki uniform are “mocha” and riot police in darker khaki are “oliang” or black Thai iced coffee.

Meanwhile celebrities who change their stance have earned the moniker “look chup”, referring to the brightly coloured Thai sweet, while food vendors are called “CIA” because they usually get to the protest sites ahead of protesters.

People spying on the protesters have been named “Natasha Romanoff” after the Marvel comic character, Thanathorn Juangroogruangkit’s blue raincoat has earned him the nickname “Doraemon”, while the yellow-shirt royalists are merely referred to as “minions”.

The most often used word at this protest and previous rallies is “kaeng” or “curry” in Thai, which when uttered in a different tone can also mean “tease”. This word is often used to describe police when they are “annoyed” by protesters.

Meanwhile, the word “kaeng mor yai” or big pot of curry is used to describe big incidents in which the police are tricked by protesters, and “kaeng thae pho” is a play on words describing the youths’ tactics to avoid police.

The Free Youth group and its ally United Front of Thammasat and Demonstration have also renamed the government intelligence agency (known in Thai as “Nuay Khao Klong”) as “Nuay Khao Kaeng” or the agency of mischievous news, and use the new name to preface the announcement of protest sites.