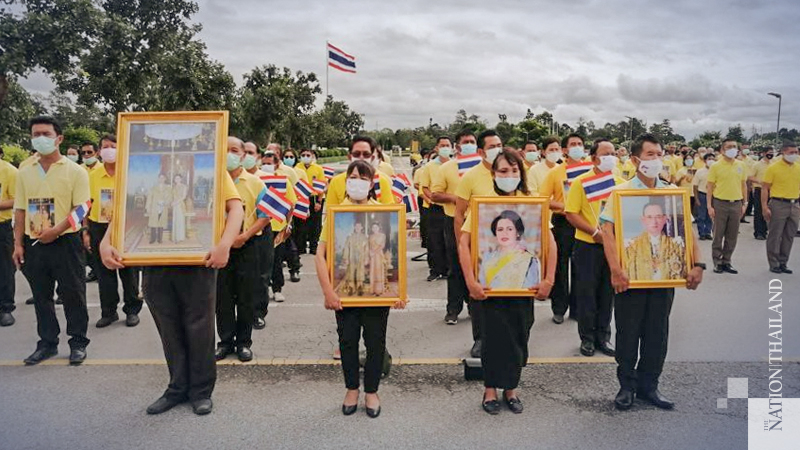 Royalists held simultaneous gatherings in different parts of the country on Wednesday in a bid to protect the monarchy.

Some 200 royalists, mostly seniors, gathered at 9.30am near the clock tower in Lampang’s Muang district. Police were on hand to ensure their safety.

At 10am, some 5,000 government officials and royalists showed up at the Chiang Mai International Exhibition and Convention Centre in Chiang Mai’s Muang district to mark the 120th birthday of the Late Princess Mother Srinagarindra. Governor Charoenrit Sanguansat presided over the ceremony.

Meanwhile, in Phra Nakhon Si Ayutthaya, more than 100 subdistrict and village headmen gathered at the district office to submit a letter calling for the monarchy’s protection.

“This move aims to boost awareness among people about maintaining peace, unity and solidarity,” the group’s leader Direk Khanthamala said.

In Songkhla, at 10am more than 1,000 royalists arrived at the Sathing Phra district office to read a statement calling for the institution to be protected. The gathering dispersed 45 minutes later, but promised to regroup at Songkhla City Hall on Friday.

In Nakhon Si Thammarat, Khangka Taweesin School's directors, teachers and students kicked off their 2-kilometre march down Highway 401 in Sichon district. The march took about an hour and was aimed to create awareness on protecting the institution.

Similarly, royalists in Narathiwat started their march from the Bank for Agriculture and Agricultural Cooperatives to the district office in Sungai Kolok at 9am to call for the protection of the monarchy.