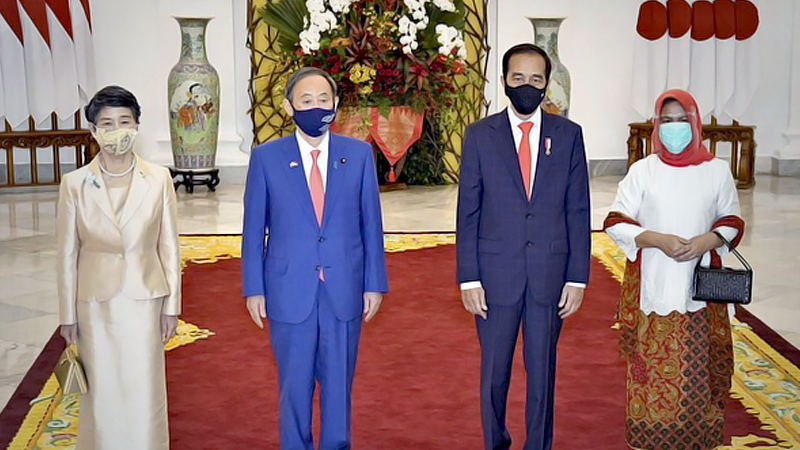 BOGOR, Indonesia — Prime Minister Yoshihide Suga held a meeting with Indonesian President Joko Widodo at the Indonesian presidential palace in Bogor on Tuesday and agreed to strengthen security cooperation with a view to dealing with China, which is increasing its maritime activities. To help Indonesia cope with the outbreak of the novel coronavirus, Suga announced that Japan would extend ¥50 billion in yen-denominated loans to Indonesia.

After the meeting, which lasted about one hour and 20 minutes, Suga said at a joint press conference that the Association of Southeast Asian Nations (ASEAN） is the cornerstone for realization of the free and open Indo-Pacific vision. “Japan will take the lead in contributing to the peace and prosperity of this region.”

The two leaders confirmed that they will hold a “two-plus-two” ministerial meeting involving their foreign and defence ministers at an early date, which will be the second time after the first such meeting in 2015, and will accelerate talks on exports of defense equipment from Japan.

At the meeting, the Japanese prime minister also expressed Japan’s intention to help Indonesia develop human resources, including those of its coast guard agency.

The two leaders exchanged views on regional situations, including North Korea and the South China Sea, and confirmed that they will cooperate closely.

Suga asked the Indonesian president for cooperation in resolving the issue of Japanese abducted by North Korea. Suga also pledged to provide ¥50 billion in yen loans to Indonesia and more than ¥4.4 billion in medical supplies and equipment to medical research institutions in the country.

The two leaders agreed to make arrangements to exempt short-term business travelers from the 14-day quarantine required at the time of entry as soon as possible.

They also confirmed that the two countries will cooperate on infrastructure development, including construction to extend a subway line that opened in Jakarta last year and the development of remote islands.