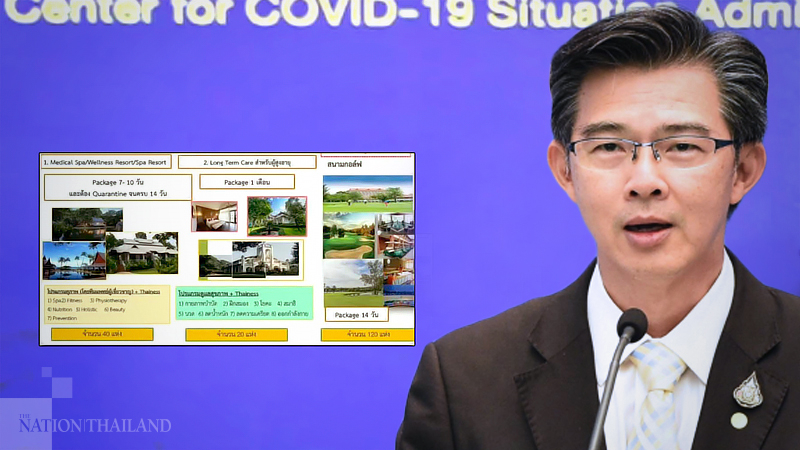 The Centre for Covid-19 Situation Administration (CCSA) has okayed two quarantine packages for tourists – wellness quarantine that will be held at a medical spa and wellness resort and a long-term care package for the elderly.

• The successful trip of a government delegation from China.

• Permission for British and Czech sailors to enter the country.

• Deciding citizens from which countries can enter the Kingdom under the special tourist visa.

• Allowing cruise liners to enter Thailand. Some 60 ships with about 650 people on board have applied to anchor in Thailand. The passengers can generate revenue of up to Bt2.1 billion if they are allowed to step on land after undergoing mandatory 14-day quarantine on board and taking the three RT-PCT tests offered.

• Permission for foreign crew waiting to switch ships to step on Thai soil and move in a restricted area.

• Relaxing the wellness quarantine model for foreigners. CCSA found that 1,428 medical tourists and their companions came to Thailand this year, generating revenue of about Bt1 billion.

The Department of Health Service Support, meanwhile, has proposed three models for the wellness quarantine option. The first two have been approved, but CCSA needs to closely study the last one.

The three models, which kick in after the 14-day mandatory quarantine, are:

• A seven to 10 day package at a medical spa, wellness or spa resort offering health programs like fitness, food or beauty with a team of experts or doctors present. Some 40 venues are being considered.

• A 14-day package related to sports and golfing. Some 120 venues are being considered.