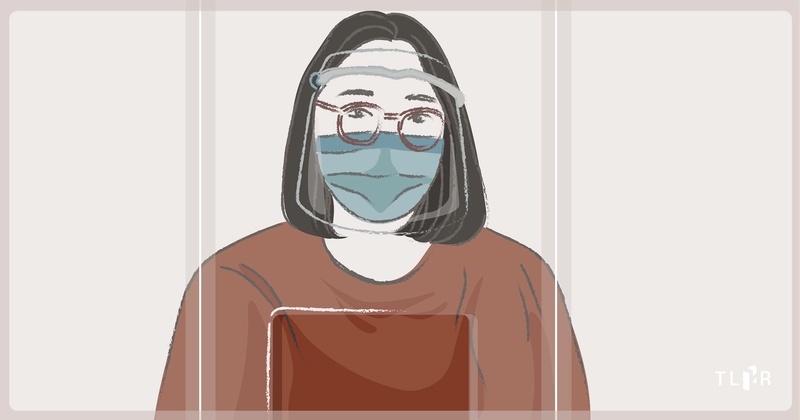 The Thai Lawyers for Human Rights Centre reported on the well-being and condition of pro-democracy protest leader Panusaya “Rung” Sithijirawattanakul in a Facebook post on Thursday, after its representative visited her earlier in the day at the Central Women Correctional Institution in Bangkok’s Chatuchak district.

Panusaya was arrested on the morning of October 15 at her hotel on charges of sedition and illegal gathering among others in relation to her role in the September 19 rally in Sanam Luang.

“Rung was seen with short black hair, which is different from her usual long, dyed blonde hair. She was wearing a blue fabric face mask and a face shield as well the brown prisoners’ garb,” the post read. “She has been told that the centre has filed an appeal after court denied bail for her as well as for fellow protest leaders Parit ‘Penguin’ Chiwarak and Panupong ‘Mike’ Jadnok.

“Rung said this holding cell was even more crowded than the cell in Thanya Buri Prison in Pathum Thani, where she had been held earlier,” the post said. “She is being kept with 48 other female inmates in the quarantine cell and has said that some inmates recognised her and came up to greet her.”

When asked if she had any message to share with other protesters outside, Panusaya said: “I’m alive and well, and my ideology will always be with you, though my body is stuck here in prison. I’d like to send my best wishes to everyone who is still fighting against dictatorship and feudalism, and thanks or their support from all of us inside prison.

“Please come out and join the rally to prove the power of the people. If the dictator still fails to meet our conditions, we will increase the protest levels,” she said, referring to the letter the protesters had submitted to Prateep Keeratirekha, the prime minister’s deputy secretary in political affairs on Wednesday night during their rally outside Government House.

The letter calls on Prime Minister General Prayut Chan-o-cha to resign, and demands that legal action against arrested protest leaders be stopped immediately.

"Rules in the justice system are important, but the correctional institute must pay attention to human rights as well,” Angkhana said. “If the lawyer can meet the inmate, the inmate's mother should be allowed to meet her daughter as well."

Forcefully dying Panusaya's hair and taking her glasses also violated her rights as well as the institute’s own rules, as she is not a convicted prisoner, she added.

She said the correctional institute should review its regulations.