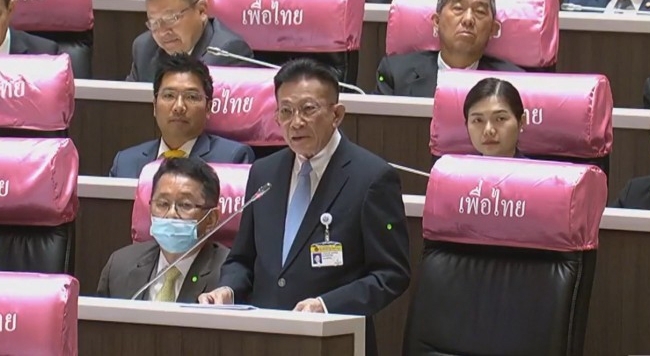 In his speech during the Parliament’s extraordinary session, which kicked off on Monday morning, Pheu Thai leader Sompong Amornvivat outlined the reasons why Prime Minister Prayut Chan-o-cha should resign and called for protest leaders to be released.

He said Prayut should resign because he is a burden on the country, adding: “If you resign, it will show that you are taking responsibility for all your failures.”

He also insisted that all protesters who have been thrown behind bars unfairly should be released immediately.

“You have overlooked the people and are arresting anybody who stands against you,” he said.

He added that lawmakers should use this extraordinary session to seriously consider the protesters’ demands and amend the Constitution so it is more democratic.

Sompong said the protests were justified because Prayut’s government has written a Constitution that supports itself, instead of writing one that provides for society and ensures equality.

The Pheu Thai leader said Prayut has failed as a leader of the country during his six years in administration, pointing out that he had received his power unfairly under rules that had been created to be advantageous for him and his allies.

He said this administration is not accepted by the people, and slammed Prayut for ordering a violent crackdown on unarmed protesters on October 16.

Sompong said the pro-democracy protesters were exercising their democratic rights and freedom, and that their demands should be considered seriously.

He also said the government should stop using time-buying tactics, adding that the steps taken so far to deal with problems only shows that the powers-that-be are narrow minded. He added that he hopes this extraordinary parliamentary session will not be used to justify this government’s shortcomings.

The session wraps up on Tuesday.

As members debated in Parliament , pro-democracy protesters kept up pressure on the Prayut government to resign with plans to march from the Sam Yan intersection to the German Embassy on Sathorn Road at 5pm. The protesters said they would deliver a letter asking the German government to check whether HM the King has been ruling over Thailand from Germany, where he is thought to spend most of his time.

Meanwhile, ultra-royalists announced they would gather in front of the embassy for a counter-demonstration at 2pm.