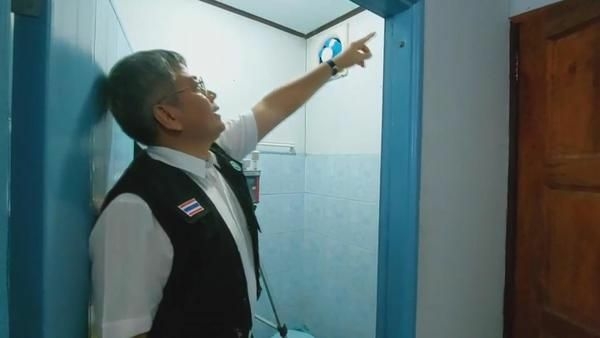 Three people fainted while bathing in two Phetchabun resorts last week, and public health officials said on Monday that the reason was found to be propane gas.

The incidents took place on October 20 and October 23.

Sarasin Saetao, 23, said he had turned on the heater to take a hot shower, but five minutes later he started feeling dizzy and turned off the shower. However, he fell unconscious as he tried to leave the bathroom and then woke up to find himself in hospital. He admitted to not turning on the exhaust fan while bathing.

The second case involved two children aged four and 12. Their mother, 30, said when it appeared her son and daughter were spending far too long in the shower, she decided to look in and found them unconscious on the bathroom floor. They were then taken to hospital and revived.

Officials visited the two resorts on Monday and learned that the second resort had no exhaust fan installed in the bathroom.

Upon measuring the level of gas in the air, the officials found that the quantity of propane in the bathrooms rose as soon as the water heaters were turned on, which explains the reason why the three people had fainted.

Propane is commonly used for heating water, but when the level of this gas rises beyond oxygen, then people can suffocate and faint.

The resorts have been advised to install exhaust fans in both bathrooms and bedrooms as well as prepare oxygen canisters for accidents.